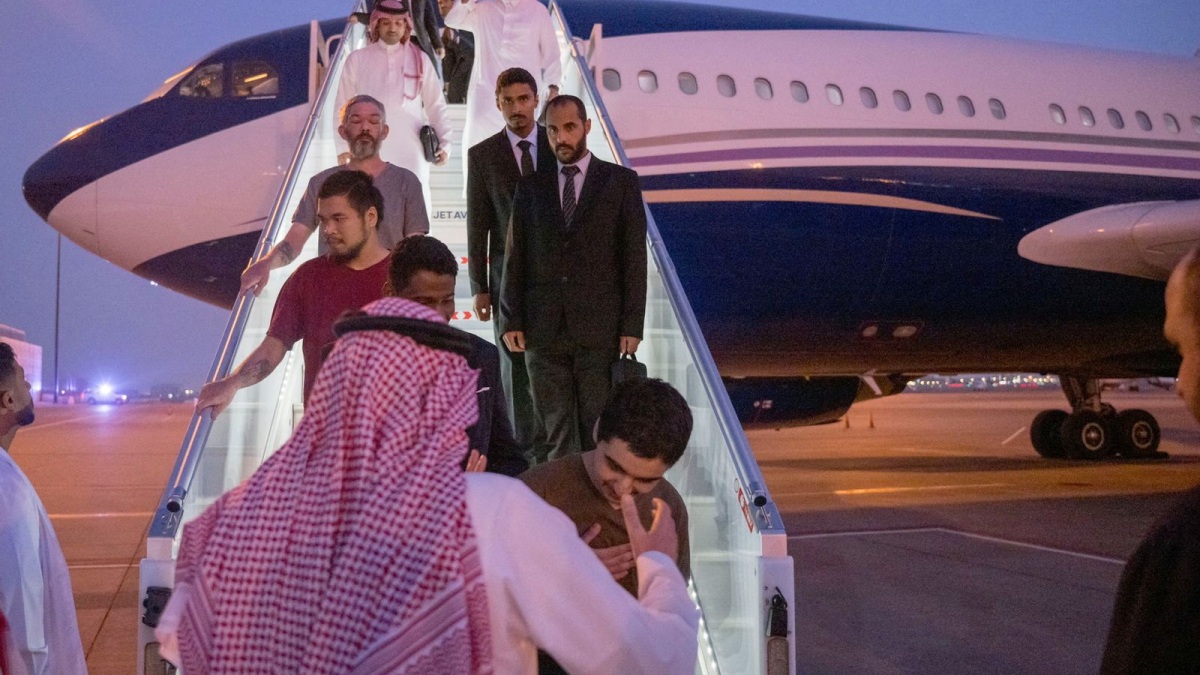 Those exchanged include 10 foreign citizens and the Ukrainian commanders who defended Mariupol.

Russia and Ukraine have carried out a surprise prisoner swap involving nearly 300 people, the largest since Moscow’s invasion began nearly seven months ago.

Those released include prisoners of war from countries including the United States, the United Kingdom, and Morocco, some of whom had been sentenced to death after being captured in Ukraine and accused of being mercenaries.

Russia also freed some 215 Ukrainians, including the five commanders who led a prolonged Ukrainian defence of the southern port city of Mariupol earlier this year.

In exchange, Ukraine sent back 55 Russians and pro-Moscow Ukrainians and Viktor Medvedchuk, the leader of a banned pro-Russian party who was facing charges of treason.

The deal, hammered out with the help of Saudi Arabia and Turkey, had been under preparation for some time and involved intense haggling.

“This is clearly a victory for our country, for our entire society. And the main thing is that 215 families can see their loved ones safe and at home,” Zelenskyy said in a video address in which he also thanked Turkish President Recep Tayyip Erdogan for his help.

“We remember all our people and try to save every Ukrainian. This is the meaning of Ukraine, our essence, this is what distinguishes us from the enemy.”

Saudi Arabia earlier announced the release of the 10 foreigners, following mediation by Saudi Crown Prince Mohammed bin Salman, “in continuation of [his] commitment to the humanitarian initiatives towards the Russian-Ukrainian crisis”, according to a statement from the Saudi foreign ministry.

The group included five British nationals, two Americans, a Croatian, a Moroccan and a Swedish citizen, the ministry said in a statement, adding that a plane carrying the prisoners had landed in the kingdom and that Saudi authorities were “facilitating procedures for their safe return to their respective countries”.

The ministry did not identify those released by name.

British legislator Robert Jenrick said Aiden Aslin was among those freed. Aslin was captured earlier this year and sentenced to death by a court in the self-proclaimed Donetsk People’s Republic (DPR), one of Russia’s proxies in eastern Ukraine.

The pair, both from Alabama, were captured in June while fighting in eastern Ukraine where they went to support Ukrainian troops resisting Russia’s invasion.

In a tweet, Jake Sullivan, US President Joe Biden’s national security adviser, thanked Ukraine “for including 2 U.S. citizens in the prisoner exchange”. Sullivan also thanked the Saudi crown prince and the Gulf country’s government for facilitating their release.

“We look forward to our citizens being reunited with their families,” he wrote.

British Prime Minister Liz Truss hailed the release of the British nationals on Twitter as “hugely welcome news” after “months of uncertainty and suffering for them and their families”.

Truss said they had been “held by Russian-backed proxies in eastern Ukraine”, and thanked both Zelenskyy and Saudi Arabia for helping free them.

Dave Des Roches, a senior fellow at the Gulf International Forum, told Al Jazeera that both Russia and Ukraine had an incentive to reach an agreement on the prisoners, while Turkey and Saudi Arabia had an opportunity to show their diplomatic nous.

“Saudi Arabia and Turkey seem to have a new era of cooperation, but I think (the deal) is basically designed to get positive buzz and enhance the status of both countries that feel they are not getting the respect they deserve in the west at a time when world leaders are meeting in New York,” he said.

Large numbers of foreigners have travelled to Ukraine to fight since Russia’s February 24 invasion. Some of them have been caught by Russian forces, along with other foreigners in the country who say they were not fighters.

Swedish Foreign Minister Ann Linde said on Twitter that the Swedish citizen, held in Donetsk, “has now been exchanged and is well”. She also thanked Ukraine and Saudi Arabia.

Ukrainian and Russian forces have captured hundreds of enemy fighters since the start of the conflict, with a handful of prisoner exchanges having taken place.

The head of the United Nations human rights mission in Ukraine said earlier this month that Russia was not allowing access to prisoners of war (POWs), adding that the UN had evidence that some had been subjected to torture and ill-treatment that could amount to war crimes.