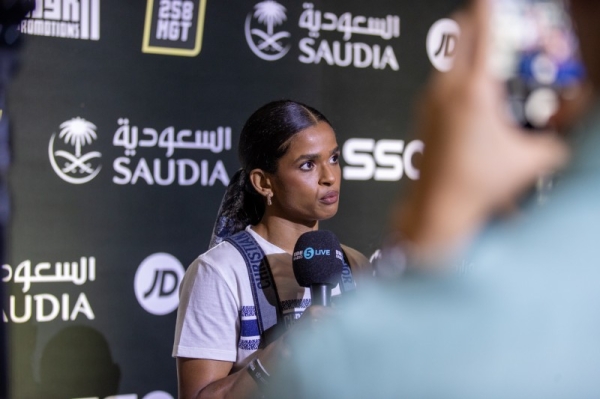 Ali was speaking to Saudi Gazette on the sidelines of the pre-fight press conference ahead of the Rage On The Red Sea event.

Ali said she saw Saudi female athletes who participated at the Olympics in various events.

"I think there are going to be so many great things and so many amazing athletes coming from this country," she noted.

The professional boxer noted that it is so important for girls to decide to get into sport at a very young age, as it will help them achieve and gain lots of life’s lessons that they will learn only in sports.

Doing sport at a young age will make girls learn to how to be disciplined and the meaning of hard work and sacrifice.

Additionally, sport will make young girls learn the meaning of winning and what it means to lose, which is very important to help them in most of their life paths, not just in sports.

Ali took a supportive initiative, where she hosted more than 30 Saudi female boxers, and conducted with them sparring matches between each other with the aim of spreading the game in the Saudi women's community.

Ali and her Dominican opponent Crystal Garcia Nova are on their way to make history in Saudi Arabia on 20 August. They will face each other in the first of its kind fight in the Kingdom for a professional women's boxing match.

Saturday night will witness several historical moments that people around the world are waiting for, including the boxers who are participating in the secondary fight, the first professional female boxing match, and the most-awaited fight, "Rage On The Red Sea".

She added that knowing that they had inspired at least 40 women was a huge achievement in her eyes.

On her preparations for the first female fight, she said she had an incredible camp, noting, "I am 100% ready to fight and to put on a great performance on Saturday night".

Ali said she and her opponent together would show that women deserved to be on this big stage and to box in Saudi Arabia.

Nova said she was grateful to Saudi Arabia for making her one of the first female boxers to participate in a fight in the Kingdom. She said she was looking forward to do her best.

Ali, who moved to England with her family from Somalia as a war refugee, has become a history-making champion in the world of boxing.

The 32-year-old fighter is also a model, and the founder of the Ramla Ali Sisters Club, which supports women to participate in boxing by providing boxing classes.

Ali is also an author. She has already published her first book, “Not Without a Fight: Ten Steps to Becoming Your Own Champion”. In addition to that, the professional boxer is an activist for racial equality. She also helped in founding the Somali Boxing Federation in Mogadishu.