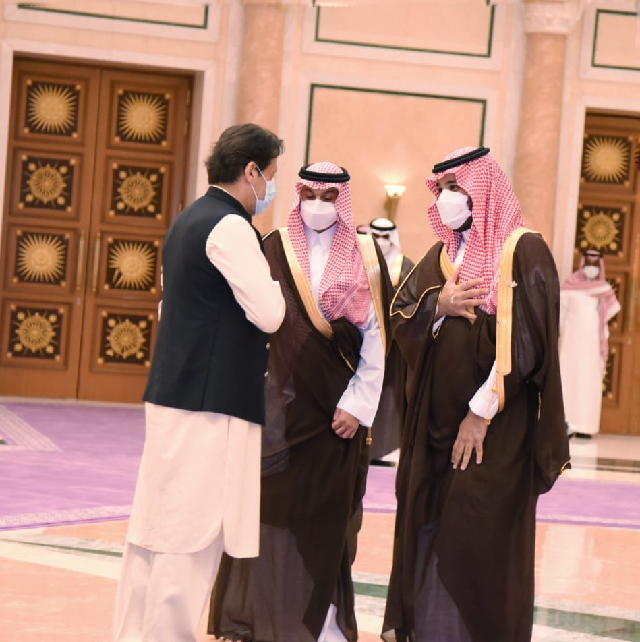 Saudi Arabia has agreed to provide a $4.2 billion lifeline to Pakistan on an annual basis in shape of cash assistance and oil on deferred payments, Information Minister Fawad Chaudhry said on Tuesday.
Saudi Arabia would deposit $3 billion cash in the State Bank of Pakistan and also provide $1.2 billion worth of oil on deferred payments, said Chaudhry while talking to The Express Tribune.

It is the second financial assistance package that the Kingdom has extended to Pakistan in past three years aimed at helping the country to manage the brewing external sector crisis. The kingdom had extended similar package valued $6 billion in October 2018 to provide breathing space before starting negotiations with the International Monetary Fund (IMF).

However, subsequently, the Saudi Arabia had withdrawn their financial assistance to Pakistan much before the repayments period.

The announcement came a day after Prime Minister Imran Khan returned from his three-day trip to the Kingdom.

A federal minister said that the Saudi government would charge an interest rate that will be around the cost of debt taken from the international financial institutions. Last time, Saudi Arabia had charged about 3.2% interest rate on its $3 billion cash deposits.

Saudi Arabia has agreed to give financial assistance amid a delay in conclusion of talks between Pakistan and the IMF for the release of the next loan tranche of the $1 billion.

It was not immediately clear whether the government has arranged funds from Saudi Arabia as an alternative to the IMF programme since it was not in need of cash assistance from a friendly country at this stage with foreign exchange reserves level of $17.5 billion.

The IMF talks were scheduled to conclude on October 15 and the delay has brought the rupee under pressure besides contributing to depletion of the foreign exchange reserves.

Pak rupee on Tuesday nosedived to its lowest value of Rs175.27 against the US dollar-the lowest level since the country’s independence. The foreign exchange reserves also dipped by $1.7 billion to $17.5 billion during the week ending October 15.

“This will help ease pressure on our trade and forex accounts as a result of global commodities prices surge,” said Hammad.

Pakistan had requested Saudi Arabia to provide oil on deferred payments for two years and the cash deposits for three years.

The Saudi Press Agency also released a statement saying that generous directive to deposit $3 billion with the State Bank of Pakistan will help the Pakistani government support its foreign exchange reserves in the face of the fallout from the Corona pandemic.

At the time of signing of the $6 billion bailout package, the IMF had put a condition on Pakistan that it cannot return $14 billion assistance received from Saudi Arabia, the United Arab Emirates and China during the three years of programme period. However, Saudi Arabia had withdrawn its money, which Pakistan returned after taking loans from China.

The second bailout package from Saudi Arabia in three years affirmed that the country could not stand on its feet during past three years and did not have the capacity to absorb any shock, including termination of a deal with the IMF.

Prime Minister Imran Khan on Tuesday also spoke with Chinese President Xi, which according to Fawad Chaudhry was rare as the Chinese president hardly spoke to the heads of the states and the governments during post Covid-19 period.

On October 1, Finance Adviser Shaukat Tarin had announced that a deal had been reached between Pakistan and Saudi Arabia for a $1.8 billion annual oil facility on deferred payments. But at that time no formal deal had been agreed.

Economic Affairs Minister Omar Ayub wrote a letter to Saudi Finance Minister Mohmmad bin Abdullah Al-Jadaan 10 days after Tarin said that a deal had been done for getting $150 million worth of oil on deferred payments every month. Ayub had raised the issue of seeking the facility to ease pressure on the foreign exchange reserves.

Pakistan has also secured oil worth $4.5 billion on deferred payments facility from Islamic Development Bank. But there was also some delay in making a $761.5 million financing agreement operational under the overall $4.5 billion framework. The sources said that there were some procedural hiccups, which were holding back the facility.

When contacted, a spokesperson of the Economic Affairs Ministry said that during the current financial year, a Master Murabaha Financing Agreement for $761.5 million was signed on October 21, 2021. “The financing is under process for effectiveness,” she added.

The ITFC financing facility will be available for import of oil 7 LNG by PSO, PARCO and Pakistan LNG Limited, said the spokesperson.

Pakistan’s oil imports surged to $4 billion during the first quarter of this fiscal year – up by almost 100%, according to State Bank of Pakistan. The finalisation of these facilities is expected to take the pressure off from the exchange rate.
#covid 19  #covid
Add Comment