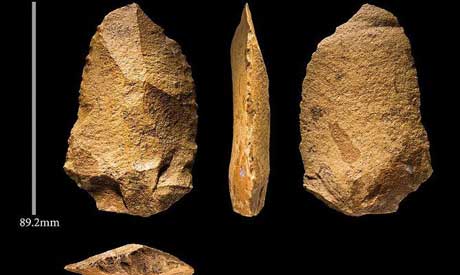 The migrations were repeated over multiple time periods dating back to 300,000, 200,000, 130,000-75,000 and 55,000 years ago, representing the longest record of early human presence in Arabia, Saudi Heritage Commission added
Saudi Arabia discovered the evidence of early human migrations from Africa to Arabia dating back to 400,000 years ago, announced Saudi Heritage Commission on Thursday.

The archaeological excavation uncovered the remains of stone tools and fossilized animal bones within layers of dry lakes in the Nafud desert in the northwest of the kingdom, which underlines the significance of the region in the developments of human civilization outside Africa, it said.

At the site of Khall Umayshan, on the outskirts of the Tabuk region, artifacts dating back around 400,000 years ago were found, including Acheulean axes, which are considered the oldest dated archaeological remains in Arabia, it noted.

The excavation of animal skeletal remains revealed the presence of hippopotamus and other bovine bones over multiple time periods, confirming the existence of an environment rich in water and dense vegetation in the north of Arabia, which corresponds to a large extent with the prevailing climatic conditions in North Africa.

The discoveries were the result of efforts by a Saudi international mission in partnership with specialists from the Saudi Heritage Commission, the Max Planck Institute in Germany, King Saud University, and several distinguished international universities and research centers.
Add Comment