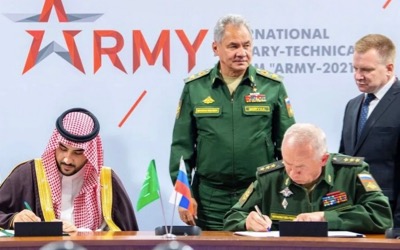 After purchasing a $ 3 billion package of arms manufacturing rights from Russia in 2017 and subsequently backing out of a deal to acquire S-400 anti-missile systems, on 24 August 2021, Saudi Arabia signed an agreement of military cooperation with the Deputy Minister of Defense, General Alexander Fomin in Moscow.
Although the exact content has not been revealed, the fact that the agreement was concluded after the victory scored by the Syrian Arab Republic and in the wake of the fall of Kabul, is an indication that Riyadh no longer perceives the balance of power in the same way as before..

Let’s keep in mind that following its defeat in Syria, the Pentagon intends to pursue the Rumsfeld/Cebrowski strategy of destroying state structures in the region, including Saudi Arabia.

One by one, many regional actors have stopped considering the United States as a protector, but as an overlord who will not hesitate to crush them when the time comes.
Add Comment