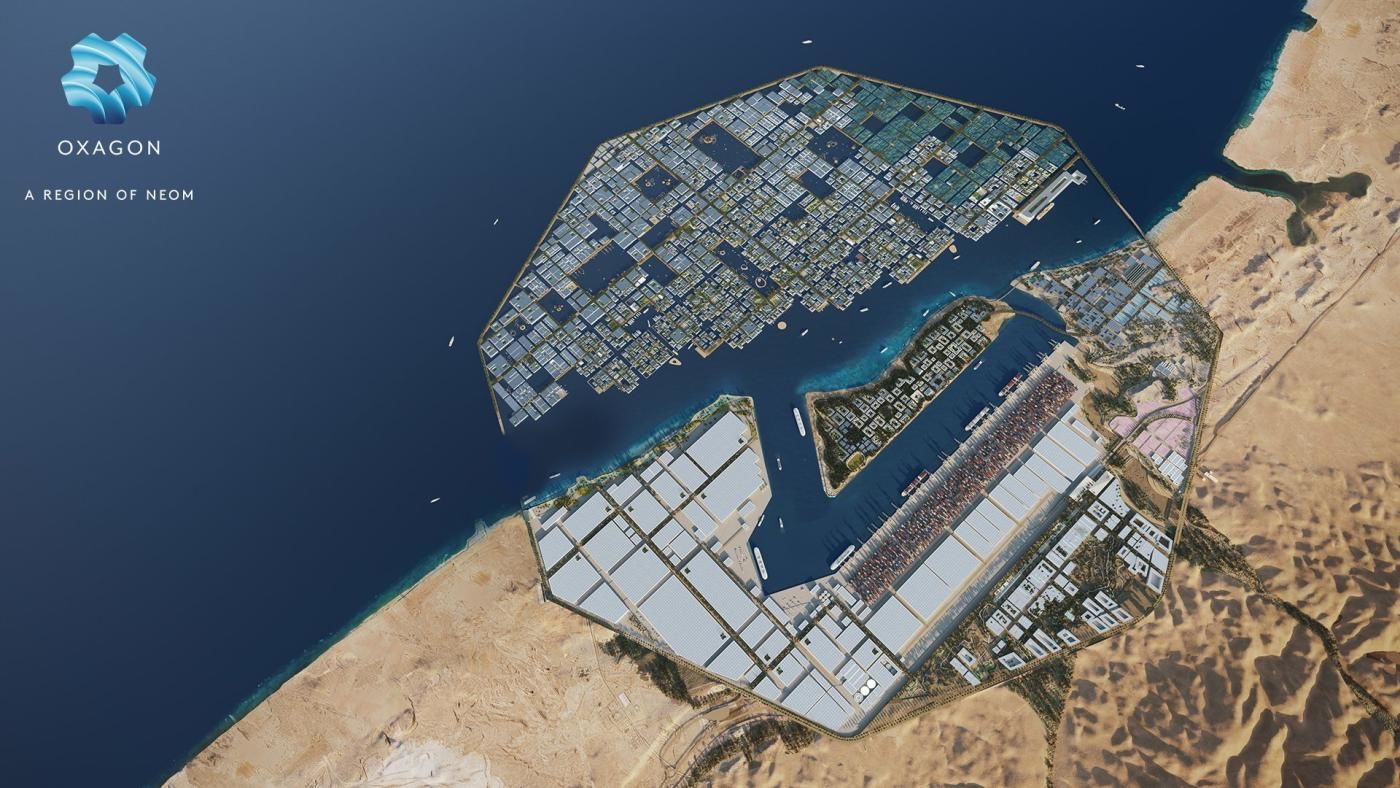 Saudi Arabia to build eight-sided city that floats on water

Crown prince announces 'Oxagon', a utopian project which claims to be the 'world's largest floating structure'

Saudi Arabia has launched its latest in a long list of grandiose projects: an octagonal industrial city floating on the Red Sea.

It will be built in the southwestern area of Neom, the futuristic new megacity which Saudi authorities claim will be 33 times the size of New York City. Half of Oxagon will float on the Red Sea, which on average is 500 metres deep.

"Oxagon will be the catalyst for economic growth and diversity in Neom and the kingdom, further meeting our ambitions under Vision 2030," the crown prince said in a statement, referencing the country's diversification strategy to move away from oil reliance.

"[It] will contribute to redefining the world's approach to industrial development in the future, protecting the environment while creating jobs and growth."

According to a press release, the city will be powered solely by renewable energy and will utilise the Internet of Things, artificial and predictive intelligence and robotics to create “a seamless integrated, intelligent and efficient supply chain”.

The project was launched with a two-minute promotional video filled with platitudes and vague ideas.

"Imagine a place that provides everything your business needs to break boundaries," the video begins. "A curated landscape of advanced industry that closes the loop and drives circularity."

The marketing clip posits that Oxagon "will bring the brightest minds together to solve the world's greatest challenges" and would boast "unrivalled livability".

Why the brightest minds would need to live in an eight-sided city, half of which would be floating on water, in order to solve the earth's greatest challenges, was made less clear.

Not settling for just being the world's largest floating structure, the clip also stressed that the utopian city would be "home to the world's first fully automated port and integrated logistics hub".

No details have yet been released about the cost of the project or how it would be built in order to float on water. According to Neom's website, the city expects its first residents in 2024 and aims to complete all onshore developments by 2030.

'Pie in the sky' project

The project has been met by ridicule and raised eyebrows among commentators and social media users.

"Congratulations to whichever consulting firm got paid a large sum of money to come up with this pie-in-the-sky idea," wrote journalist Gregg Carlstrom.

"Why am I working in a university when I could be spending my days designing fantasy cities for the Saudi crown prince," said Middle East academic Christian Henderson.

This is by no means the first time Saudi Arabia has launched an ambitious project filled with superlatives and world-firsts.

This week, MBS launched "the world’s first non-profit city", which he named after himself. Earlier this year, he also announced a plan to construct a zero-carbon city built in a 170km straight line, as the first major construction for Neom.

While the crown prince has consistently unveiled increasingly elaborate and futuristic projects, it remains to be seen whether any of these grand ambitions will ever come to fruition.

In May, a report by the Wall Street Journal claimed that there had been an exodus of Neom's staff, struggling under the sheer scale of the ideas.

Urban planners offered the crown prince a simpler plan for a zero-carbon city, but the de-facto leader reportedly retorted: “I want to build my pyramids.”

"Oxagon, just like all the projects before, like The Line, will never happen. Bin Salman fails at one project, and then he starts another to cover his crimes and failures," London-based Saudi activist Alya al-Huwaiti told Middle East Eye.

Huwaiti is a dissident member of the Howeitat tribe, who have lived in Saudi Arabia's Tabuk province for centuries but are now being expelled from their homes to make way for the megacity.

"How can Mohammed bin Salman pretend that he cares about zero carbon when he doesn't care about his own people? How can they kill Abdulrahim and say they care about the environment?" Huwaiti said.