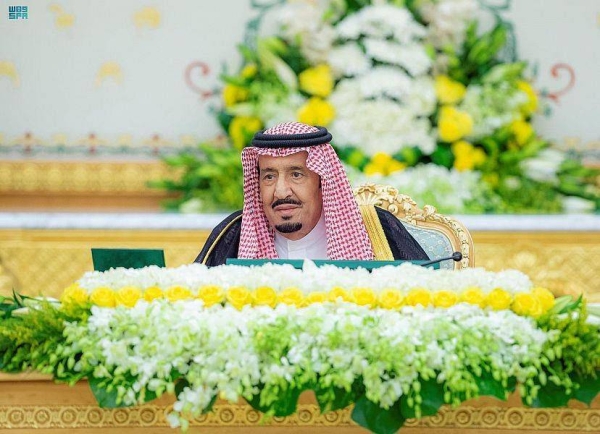 Saudi Arabia to mark March 23 as Day of Social Accountability

Saudi Arabia will mark March 23 every year as the Day of Social Accountability, the Council of Ministers announced on Tuesday.
Custodian of the Two Holy Mosques King Salman chaired a regular session of the Cabinet at Al-Yamamah Palace in Riyadh.

At the outset of the meeting, the Cabinet hailed Saudi Arabia's keenness to communicate and strengthen relations with friendly countries, and continue its pivotal role through participatory work at the global level in a way that contributes to the consolidation of the pillars of development, progress, and prosperity in various fields.

In this context, the Cabinet touched on the outcomes of the G20 Leaders’ Summit held in Indonesia, noting the significance of the Kingdom’s participation to enhance its prestigious and important position in the global economic map.

The Saudi delegation to the G20 summit was led by Crown Prince and Prime Minister Mohammed Bin Salman.

The Cabinet pointed to the Saudi contribution through this summit in supporting the efforts exerted in facing international challenges, especially with regard to preventing and responding to epidemics.

The Cabinet expressed hope that the positive results realized by the leaders would contribute to consolidating cooperation and increasing the rate of global economic growth.

In a statement to the Saudi Press Agency (SPA) following the Cabinet meeting, Acting Minister of Media Dr. Majed bin Abdullah Al-Qasabi said the Cabinet praised the results of the state visits the Crown Prince paid to the Republic of Korea and the Kingdom of Thailand, citing the positive outcomes of the discussions the Crown Prince had with the leaders of these two countries, aiming to strengthen relations and the common desire to push the relations to new and promising horizons in order to serve the interests of the peoples of the three countries.

The Cabinet also praised the fruitful meetings witnessed by the two visits to expand the scope of bilateral, regional, and international cooperation, and the signing of memorandums of understanding in areas of encouraging direct investment, energy, tourism, preventing and combating corruption, and, in particular, establishing the Saudi-Thai Coordination Council.

The Cabinet considered the Kingdom's ranking third globally and first regionally in the data of GovTech Maturity Index (GTMI) for the year 2022 according to the World Bank Group as a culmination of integration and joint work among government agencies, which produced digital transformation initiatives and programs to achieve the goals of Vision 2030 by providing advanced services through high-quality digital products that support the business environment and the march of the national economy while enhancing its international competitiveness.

The Cabinet congratulated the Saudi football team participating in the 2022 World Cup, currently ongoing in Qatar, on their victory over Argentina, hoping that the team would continue their journey in the tournament with the same spirit and determination. The Cabinet thanked the leaders of brotherly and friendly countries who sent congratulatory messages on this event.

The Cabinet authorized the Minister of Foreign Affairs, or his deputy, to discuss with Mongolia a draft memorandum of understanding on political consultations between the foreign ministries of the two countries and sign it prior to forwarding the final version to complete the legal procedure.

The Cabinet approved a memorandum of understanding on political consultations between the foreign ministries of Saudi Arabia and Senegal.

The Cabinet approved a memorandum of understanding between the Royal Commission for AlUla and UNESCO.

The Cabinet approved a memorandum of understanding between the General Agency for External Trade of Saudi Arabia and the Ministry of Foreign Trade of Costa Rica on developing commercial relations between the two countries.

The Cabinet approved an agreement between Saudi Arabia and Guyana in the field of air transport services.

The Cabinet approved two memorandums of understanding between the Public Prosecution of Saudi Arabia and the prosecution authorities in Sudan and Djibouti in the field of genuine crime and terrorism and its sources of finance.

The Cabinet approved a memorandum of understanding between the Court of Accounting of Saudi Arabia and the Accounting Chamber of Azerbaijan on cooperation in the field of accounting, control, and vocational work.

The Cabinet approved of the Commercial Treatments System on International Trade.

The Cabinet approved the financial revenues table to be levied by the Motor Vehicle Periodic Inspection (MVPI).

Meanwhile, the Cabinet approved a number of promotions in the civil service.

The Cabinet was briefed on a number of issues on its agenda, including annual reports of the General Commission for Visual Media; Diriyah Gate ‍Development Authority; the Saudi Space Commission; the Saudi Economic Business Center; Imam Abdulrahman bin Faisal University; the National Program Support for Environment and Natural Resources Management Project, Operation and Maintenance of general authorities. The Cabinet took the appropriate actions toward them.
#Costa Rica
Add Comment