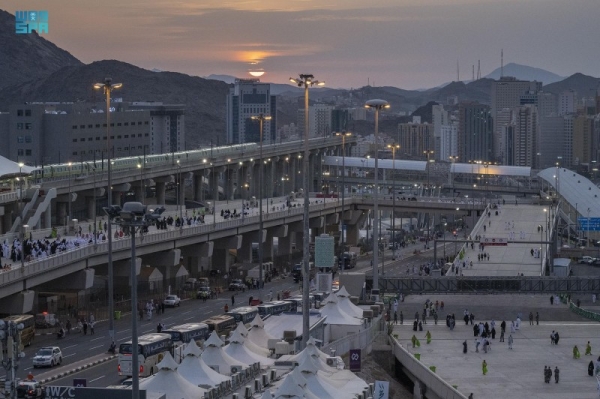 Lt. Col. Talal Al-Shalhoub, security spokesman of the Ministry of Interior, said that reiterated that the security forces won’t allow any act that exposes pilgrims to any sedition. Replying to a question during the daily Hajj press conference on Saturday about whether the rituals of Hajj have witnessed shouting of any slogans, he stressed that there has been full commitment on the part of the pilgrims in raising not any slogans.
Al-Shalhoub said that the security forces have completed all their preparations to organize the movement of crowds during the stoning ritual, including the entrance to the Jamarat facility and around the stoning basins, and in all the roads linking the pilgrims’ camps in Mina with the Jamarat facility and the Grand Mosque.

The ministry spokesman said that the seasonal administrative committees of the General Directorate of Passports (Jawazat) at the entrances to Makkah issued 26 administrative decisions against citizens and expatriates who are involved in transporting illegal pilgrims to perform Hajj, as well as in violation of not carrying a Hajj permit.

Al-Shalhoub stressed that the security person is a human being before anything else, and therefore there is a keenness to provide everything necessary for the guests of God, even if this is outside the competence of the security personnel.

Addressing the press conference, Dr. Muhammad Al-Abdel Ali, spokesman of the Ministry of Health, confirmed that the health condition of the pilgrims is reassuring. He said that no epidemic outbreaks or diseases threatening public health were recorded among the pilgrims during the rituals that the pilgrims performed since the beginning of the pilgrimage.

He said that a total of 78400 pilgrims have been benefited from medical services. Around 155 cardiac catheterizations were performed, in addition to 345 dialysis procedures, 230 multiple surgeries, and 10 endoscopic operations. The ministry has made available virtual services to more than 2,000 beneficiaries.

With regard to the return of the pilgrims in terms of millions, Abdel Ali stressed that the return of these numbers is a challenge in light of the coronavirus pandemic, especially since the crowds of pilgrims do not stand in one place but move through several sites, which requires more efforts. He also drew attention to the Kingdom’s capabilities to deal with a large number of pilgrims, and this qualifies the Kingdom to continue to receive millions of pilgrims in the coming years.
#Coronavirus
Add Comment