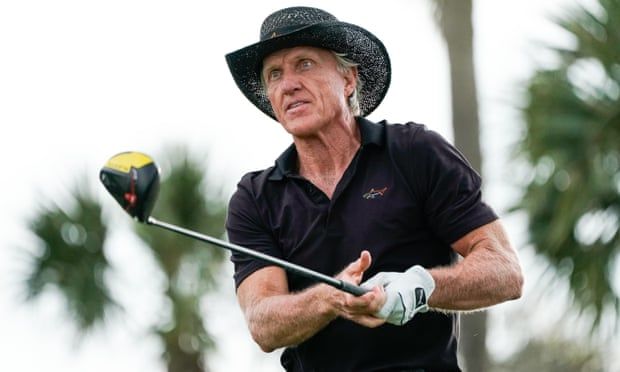 Saudi cash can come to the rescue of Australian golf but should it be allowed to?

Greg Norman’s latest venture could breathe new life into the game but how good an idea that is depends on how tainted you believe the Saudi money backing it is
It was the talk of Australian golf media in Tokyo for the Olympics. Greg Norman was, they said, coming for the Australian Open. He wanted to make it part of a Saudi-backed golf “super league”, to hurl untold millions at the tournament. Norman wanted to own it.

Now, Norman has not declared publicly that he wants to own the Australian Open – and he did not respond when contacted by Guardian Australia this week – yet ears pricked recently when news broke that he would be chief executive officer of LIV Golf Investments, a startup backed by Saudi Arabia’s Public Investment Fund worth half-a-trillion US dollars. He would also be commissioner of a proposed 10-tournament “super league” under the auspices of the Asian Tour.

The Asian Tour’s imprimatur would mean that, unlike previously mooted Saudi-backed iterations of a world golf league – Premier Golf League, Super Golf League – the tournaments would earn World Golf ranking points, and thus legitimacy. And that is what, ultimately, it seems Saudi Arabia wants for spending $200m in the next decade.

Critics call it “sportswashing” – a PR exercise in rebranding one’s reputation through sport. Those who back the Saudi intervention will argue that the sovereign wealth fund is a separate entity from the government and thus far enough removed from the kingdom’s appalling human rights record.

There is also the inevitable “whataboutery”, for the show goes on elsewhere, right? Australia just hosted a 0-0 draw with Saudi Arabia in a Fifa World Cup qualifier. Dustin Johnson has won two Saudi Internationals. Lydia Ko just won the second Saudi Ladies International. China will host the Winter Olympics despite their crackdown on “dissidents” and ethnic minorities.

Golf Australia has made a big play of getting women and girls involved in golf. But could it still hold that high ground while taking money from a nation where women were only allowed to drive cars, hold passports and travel abroad without a male guardian in 2019? Where local (Sharia) law says gay people can be stoned to death? Where “adulterers” can be beheaded? Where, according to US intelligence agencies, Crown Prince Mohammad bin Salman ordered the murder of Washington Post journalist Jamal Kashoggi at the Saudi consulate in Istanbul?

Should Australian golf draw a line in the sand and knock back Norman (who, again, hasn’t made any formal or public entreaty that he wants the Australian Open or any Australian event) and his Asian Tour-sanctioned “super league”?

Or will the game look the other way and find the enormous sums of money the kingdom continues to swap for oil too tempting to pass up on? To point to the inaugural National Golf Week, that has been trumpeted in Saudi Arabia and will “support our ‘Vision 2030’ goals in terms of encouraging as many Saudis as possible to get active, regardless of their age, gender or how good they are at golf”?

As Australian amateur golfer, the late Kerry Packer, once said: “There’s a little bit of the whore in all of us. Gentlemen, name your price.”

Should Norman come for Australia, what then? Golf Australia – which runs the Australian Open, Victorian Open and Queensland Open – and the PGA of Australia – which runs the PGA Championship and state-based PGA tournaments – were, for several years, quite separate, even antagonistic entities. But they’ve recently collaborated and share office space and ideas. And if Norman gets in touch – which he has not – they will cross that bridge when and if it happens, according to a Golf Australia source who said they had “heard nothing since the Olympics”.

“There’s a lot going on,” Kirkman said. “It [a super league] has been spoken about for quite a long time. The best thing we can do, when things get sorted out, is to assess the vision and plan of LIV Investments. We’ll wait and see their schedule and how our players might fit in.”

The PGA of Australia does not have an official stance on the source of LIV’s money. “We wouldn’t comment on that,” Kirkman said. “Our focus is on our members and creating playing opportunities and pathways for them.”

With Covid and quarantining, the Australian Open was cancelled for 2021 while the PGA Championship and Victorian Open (in January and February) will not be co-sanctioned by the DP World Tour (formerly European Tour). Australasian Tour Tournament director Nick Dastey told radio station RSN the Australian PGA has “a very strong, strategic alliance with the DP World Tour”.

“Our 2022 PGA Championship will be played late November, early December. That will be part of the DP World Tour. We expect it will be the same for the Victorian Open,” Dastey said, adding that there is a “10-year agreement” between the Australasian Tour and DP World Tour.

For all that, Norman’s “super league” remains undoubtedly titillating – anything that challenges the status quo, hegemony and cookie-cutter sameness of the US PGA Tour is no bad thing. Norman wants to grow the game.

“If we have an opportunity to invest and grow the game of golf through our investment dollars in Asia, God bless us,” Norman told Golf Digest. “There’s nothing wrong with that, and no one should decry us for doing that. I just get a little bit miffed as to why people feel so against me wanting to do that through LIV Golf Investments.”

It just depends on how tainted you believe the Saudi money backing it is.
#johnson  #covid
Add Comment