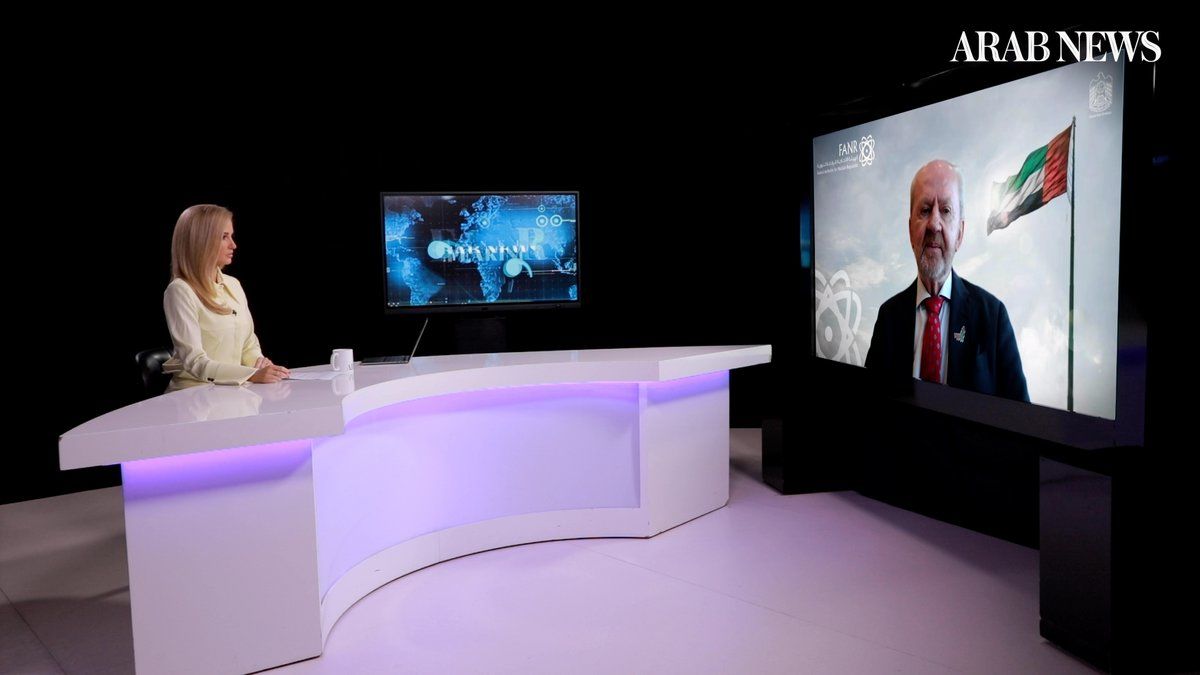 Saudi-Emirati cooperation in peaceful atomic-energy programs can be a model, says head of UAE’s nuclear regulator

As the world watches the Russia-Ukraine conflict rage on, many fear that a nuclear escalation is imminent. Despite this threat, regulators and operators around the world are working to ensure the implementation of safe nuclear power, according to the head of the UAE’s regulatory authority.

Referring to the disasters in the former Soviet Union in 1986 and in Japan in 2011, Christer Viktorsson said that while atomic energy can be a hazardous venture, “nuclear safety in general has improved significantly since Chernobyl. It improved further after the Fukushima accident. Many safety enhancements have been done.”

Nevertheless, in the context of the fighting in Ukraine, he said: “We should all be alarmed by the situation when there is a risk of a nuclear accident. We have seen accidents in the past and they have been catastrophic in nature, many of them, and done a lot of damage to the environment and public health.”

Viktorsson, currently director-general of the Federal Authority for Nuclear Regulation in the UAE, made the remarks during an appearance on “Frankly Speaking,” the Arab News current affairs talk show that engages with leading policymakers and business leaders.

The remarks came ahead of the 27th UN Climate Change Conference, or COP27, which kicked off in Egypt’s Sharm El-Sheikh on Sunday.

The UAE, which will host the COP28 climate summit, is home to the Barakah nuclear power plant, which has four reactors and is the first commercial facility of its kind in the Arab world.

In line with a plethora of environmentally friendly initiatives launched by Gulf countries, the plant will help “to limit the emission of CO2 (carbon dioxide) to the environment. And I think we all should support the development of technology that makes the world more sustainable,” Viktorsson said.

“It is not a quick fix. If you start to build a nuclear power plant and put it in operation, it takes between five and 10 years. If you want to start with more advanced technology, it might even take a longer time. So, it is part of a solution, I believe, but it’s not the only solution.” 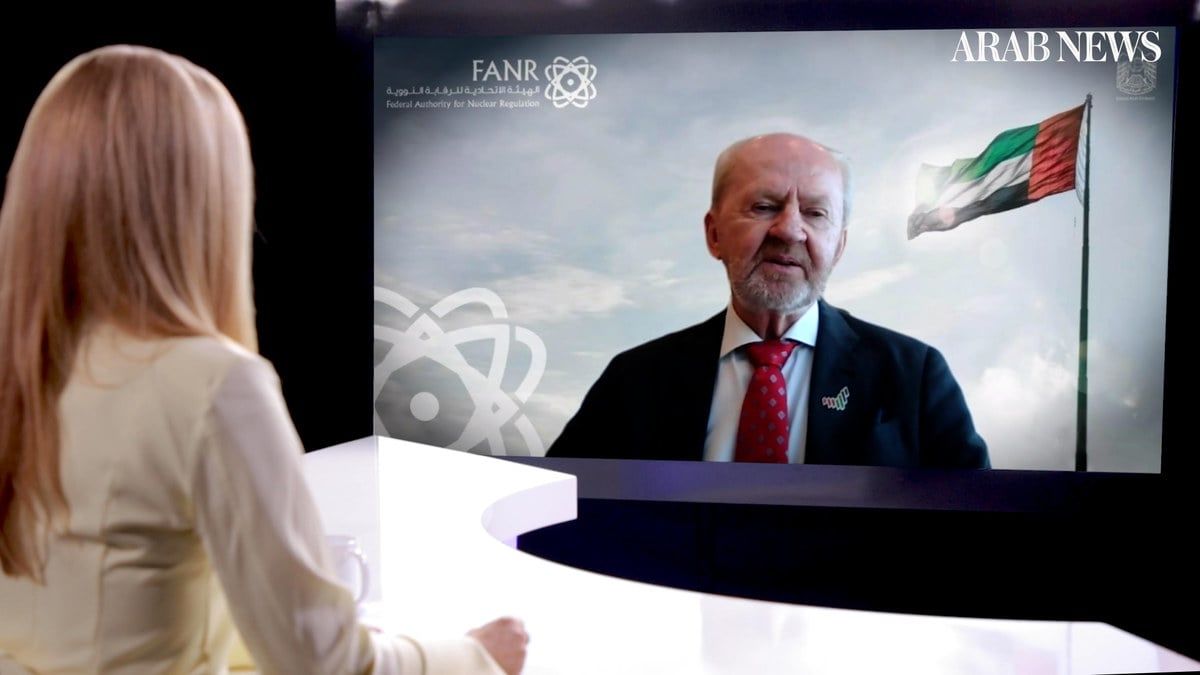 The head of the Emirati nuclear regulator says there are many things to learn from each other’s practices and that the lessons of Barakah power plant will be useful to all countries with civil atomic-energy programs.

In December 2017, the Iran-backed Houthi militia claimed that they had launched a cruise missile at the Barakah plant. While the UAE reported that no missile reached the facility, the incident demonstrated the need for the highest security and safety protocols. In February this year, Viktorsson told the Reuters news agency that he was confident that Barakah was well protected.

In the same vein, he told Katie Jensen, the host of “Frankly Speaking,” “modern nuclear power plants, including Barakah in particular, have a very strong physical protection that is part of the requirements in the UAE. Then, of course, physical protection is built into the plant.

“But the entire country needs to play together to ensure physical protection of a nuclear power plant,” he said, adding that in addition to physical security, Barakah is equipped with strong cybersecurity protocols and engages in frequent testing and drills.

For years, Saudi Arabia has worked toward a clean, safe atomic-energy program. Recently, officials from the UAE toured the Kingdom’s nuclear research reactor project at King Abdulaziz City for Science and Technology.

The specifications for the Saudi project’s reactors were designed by KACST with the participation of King Abdullah City for Atomic and Renewable Energy, or K.A.CARE, and international experts, according to the Kingdom’s Vision 2030 website.

The nuclear research project, founded by a royal decree in 2010, aims to build “a sustainable future for Saudi Arabia by developing a substantial alternative energy capacity fully supported by world-class local industries.”

Since the Kingdom became a member of the International Atomic Energy Agency in 1962, it has adhered to its commitments under the IAEA’s “Milestones Approach,” which is a three-phase plan culminating in the construction and operation of a nuclear plant.

So far, Saudi Arabia has completed phase one, which involves a series of studies, and phase two, which consists of the establishment of regulatory frameworks and organizations.

In February this year, Rafael Grossi, director-general of the IAEA, told a virtual conference in Riyadh that the agency was working closely with Saudi Arabia to develop its nuclear energy program. 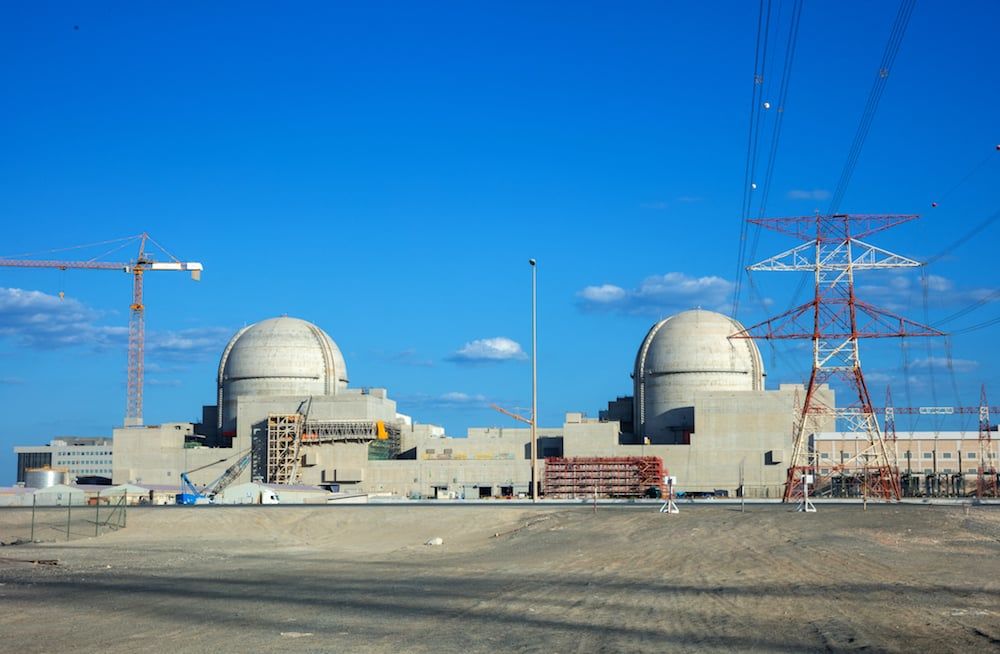 For years, Saudi Arabia has worked toward a clean, safe atomic-energy program. Recently, officials from the UAE toured the Kingdom’s nuclear research reactor project at King Abdulaziz City for Science and Technology.

“We have had a cooperation agreement now with the regulatory authority in Saudi Arabia and we have been visiting them and they have been visiting us. We meet regularly in order to share information,” said Viktorsson, a physicist with over three decades of experience in nuclear safety and regulation.

“We share information on how to build an installation, how to regulate (and) which types of regulations are needed.

“There are many things to learn from each other’s practices. I mean, we have in the UAE recently built three reactors and Saudi Arabia is starting to build. So, of course, there (are) a lot of interests in common. And the UAE and FANR is willing to share, because one of our principles is transparency and openness to civil nuclear technology.”

While Iran continues to press ahead with its controversial nuclear program, Viktorsson said: “I think the UAE is already a model, and the cooperation between (the UAE and Saudi Arabia) could be another model of how two countries next to each other could support each other in the peaceful aspects of nuclear power.

“In the region, as we see in other regions of the world, there is a lot of openness and discussions and cooperation between regulatory authorities. And this is something that we are introducing now also in this region. It’s of great, great benefit.”

Safety is the highest priority for FANR and the UAE when it comes to nuclear power, according to Viktorsson. Since 2008, the country’s nuclear policy has “emphasized that the UAE is going to comply with the highest international standards in safety, security and non-proliferation. And we are implementing that in the siting of the Barakah power plant.

“We have assessed the site, that it’s safe. We have supervised the construction of the Barakah power plant, all the time with our inspectors. We are now supervising the operation.”

In addition to this, the FANR headquarters in Abu Dhabi has screens monitoring each reactor, and frequently runs simulators to prepare for any possible scenario at the plant. Laboratories also monitor the radiation levels of fish, water, air and sand around Barakah.

In recent months, IAEA officials have expressed concern that the fighting in Ukraine could result in a catastrophic nuclear accident at the Zaporizhzhya atomic power plant, Europe’s largest. The plant has been under Russian control for months now, operated by Ukrainian engineers.

“We should all be alarmed by the situation when there is a risk of a nuclear accident,” said Viktorsson. “We have seen accidents in the past and they have been catastrophic in nature, many of them, and done a lot of damage to the environment and public health.” 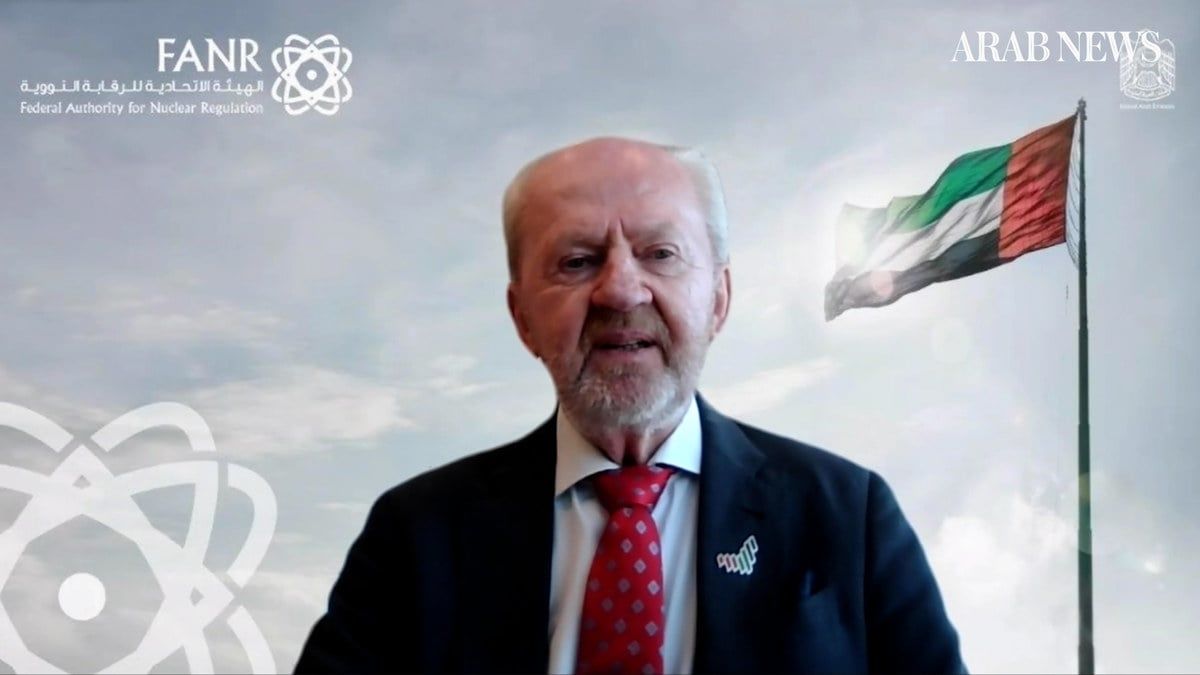 Christer Viktorsson said that while atomic energy can be a hazardous venture, “nuclear safety in general has improved significantly since Chernobyl.”

Talking of safety, he said location and operation of a nuclear power plant are not the only challenges when it comes to safety. The disposal and storage of nuclear waste is another issue that countries establishing their nuclear power capabilities must tackle.

There are different types of nuclear waste produced by power plants. One category is operational waste, which are clothes, tools and equipment contaminated with radioactivity, that require a certain type of treatment, but are classified as “low- and intermediate-level waste,” and can be stored easily.

The challenge, according to Viktorsson, is the disposal and storage of spent nuclear fuel.

“That is a different story because that is hazardous for thousands of years and we need to make sure that we find a system that really can take care of this waste. So, a lot of research has gone on in the world and we are benefiting from all this experience from other countries, in the UAE. And the government is working on a policy now for the safe disposal of nuclear spent fuel,” he said.

Since 2008, Viktorsson said, the UAE has committed to taking “a very responsible attitude toward the safety of radioactive waste, the same attitude as for the nuclear power plant.”

However, he adds, “the decision to be made on this matter is not urgent. We have almost 100 years before we need to decide on the final solution for spent nuclear fuel. One can imagine that the technology is going to develop. So, we might find a smarter way of taking care of nuclear waste than disposing of it in the ground. But the UAE is making sure that we will take care of it in a safe manner and in order to make sure that it doesn’t damage any environment or human being.”

In addition to diversifying the UAE’s energy sources and economy away from oil and gas, the country’s nuclear program has brought with it social benefit, according to Viktorsson. He stated that FANR’s workforce is 44 percent female and 72 percent Emirati.

“It is important that we utilize all the skills that exist in the country, and many of the young females and men are very interested to join FANR and the nuclear industry,” he said. 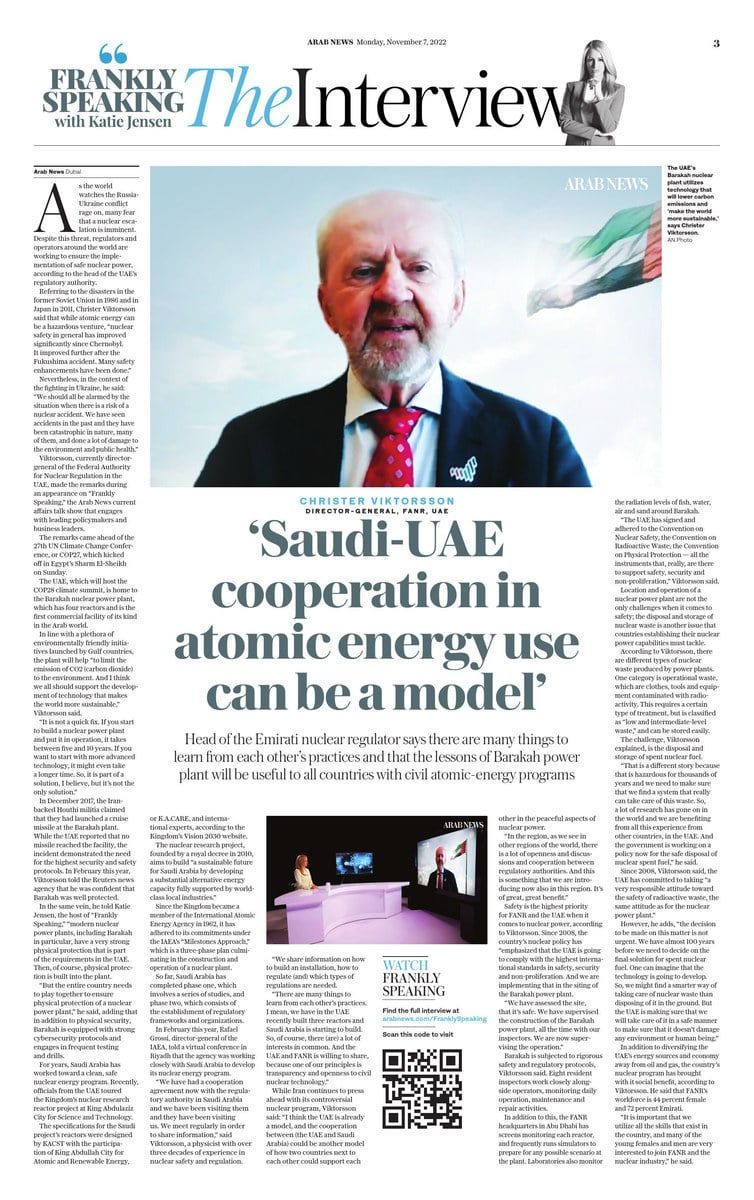