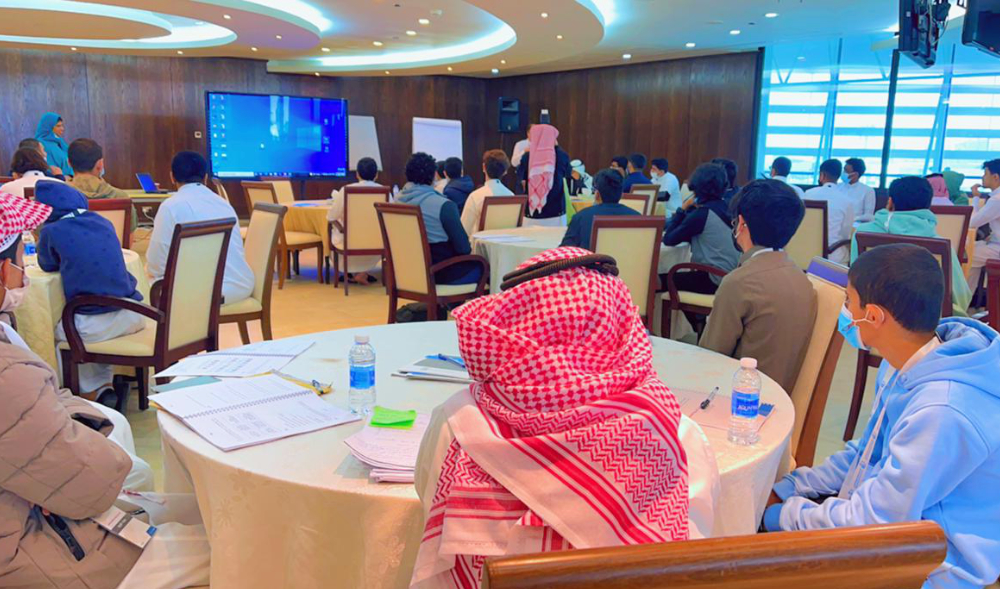 More than 330 students, male and female, are being shortlisted to take part in the fifth phase of the National Olympiad for Scientific Creativity, also known as Ibdaa.
The front-runners in the central exhibition stage will qualify for the final stage of the competition before taking part in the International Science and Engineering Fair in 2022.

Some 110 talented male and female students from the western region are showcasing their projects at King Abdulaziz University’s King Faisal Convention Center over three days, beginning on Wednesday. Earlier, over 220 contestants presented their projects in the Eastern Province and Riyadh, as part of the central stage of the competition. The contestants received training courses in specialized workshops.

There are two judging committees that consist of 56 evaluators representing 54 government and private sectors in the Kingdom. Their main task is to examine the projects and approve the winning ones for the next sixth stage before the final phase.

According to Dr. Nazeeh Al-Othmany, deputy secretary-general of corporate relations and business development at Mawhiba, more than 103,000 students participated in the competition. He added that 333 of these have qualified for the ongoing stage.

“We are in the third central exhibition of the National Olympiad for Scientific Creativity, where 110 students of both genders from the country’s western, southern and northern regions are taking part to display their innovative works before a specialized judging committee can give its preliminary evaluation,” Al-Othmany said.

He added that the committee will select some of the projects for the next phase of the Olympiad. He further said that they have recently concluded similar exhibitions in Riyadh and the Eastern Province, where more than 220 students participated.

“We will now select 150 participants from the three central exhibitions to compete in the next stage, which will be held in Madinah under the patronage of Madinah Gov. Prince Faisal bin Salman. Each project will be evaluated and judged by four assessors. We will then select the best projects to represent Saudi Arabia in the ISEF 2022, where 2,000 to 2,500 students will be representing up to 90 countries,” he told Arab News.

He noted that Saudi students have won 83 prizes since Mawhiba began participating in the annual international event.

Speaking about the criteria by which a project is judged, the deputy secretary-general said that a group of specialized academics examine all the projects submitted and decide which ones qualify for the other stages of the competition.

“Our main goal is for the students to understand the basics of scientific research, scientific methodology, making experiments, gathering results and analyzing them. We also aim to guide the participants to deploy their creativity and talents in finding solutions to the problems in their societies, such as issues related to the environment, artificial intelligence, agriculture, health and sustainable development,” he said.

Abeer Taher, supervisor of creativity at the Jeddah education department, told Arab News that they evaluate the projects of their students before filing them to Mawhiba.

She added that they also communicate with universities and research centers to facilitate the talents’ work and provide them with every possible assistance.

“Some 33 female students and 10 male students of the Jeddah education department have reached this stage of this year’s edition of the competition,” said Taher, who is also a ministerial STEM supervisor.

She hoped that more teachers would be trained in searching for talented students and caring for them. She noted that Ibdaa provides its students with the skills of scientific research, such as deep questioning and critical thinking.

Giving a brief on his project, Abdullah Ruaidan, an 11th-grade student from Makkah, told Arab News that his project involves a warning system that can detect tsunamis that cause substantial environmental damages and casualties.

“The objective of my idea is to construct an ocean buoy that can act as a real-time early warning system. The idea also aims to develop a control center using AI to collect and analyze given data and activate a warning,” Ruaidan said. He added that underwater sensors can detect the speed and direction of the tsunami.
Add Comment