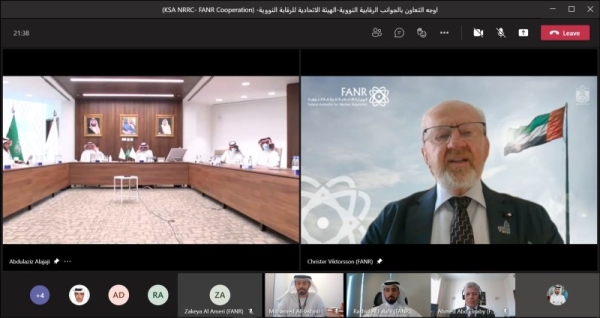 Saudi Arabia's Nuclear and Radiological Regulatory Commission (NRRC) and the UAE's Federal Authority for Nuclear Regulation (FANR) concluded the first bilateral cooperation initiative in the nuclear regulatory industry.
The cooperation initiative is part of an agreement signed in 2019 on the peaceful use of nuclear energy between the two countries.

A one-month series of topical workshops were held between the two regulatory bodies, where ten working groups were established to exchange information and transfer knowledge, covering topics such as nuclear safety and security.

Members of both regulatory bodies discussed several topics during the workshops, including the development of a nuclear regulatory framework and committing to international obligations to nuclear non-proliferation.

Dr. Khalid A. Aleissa, chief executive officer of the NRRC, said: "We expect our ongoing dialogue to be a good example of international nuclear regulatory cooperation among states, with an emphasis on neighboring nations. Since the 1960s, regulatory activities were performed on various applications of nuclear technologies in Saudi Arabia, such as those used in medical and mining-related activities, mainly oil and gas."

"Nuclear activities in the Kingdom have become more realistic in recent years, due to the construction of the Low Power nuclear Research Reactor (LPRR) and a plan to construct a nuclear power plant for electricity generation. These nuclear activities highlight the importance of the NRRC’s regulatory role, especially in ensuring compliance to relevant international laws and treaties," he added.

"We are delighted to start this bilateral cooperation with our Saudi counterpart following the cooperation agreement between our countries. The UAE is a global role model of the development of a peaceful nuclear energy program and a strong regulatory framework for overseeing the nuclear and radiological sectors. Such initiatives offer us the opportunity to transfer the knowledge gained over many years to our Saudi partners while learning from their related experiences," said Christer Viktorsson, director-general of FANR.

The NRRC also confirmed its participation in the ConvEx-3 exercise, which will be hosted by the UAE in 2021 and is the largest emergency exercise conducted by the International Atomic Energy Agency (IAEA) involving its member states and relevant international organizations.
Add Comment