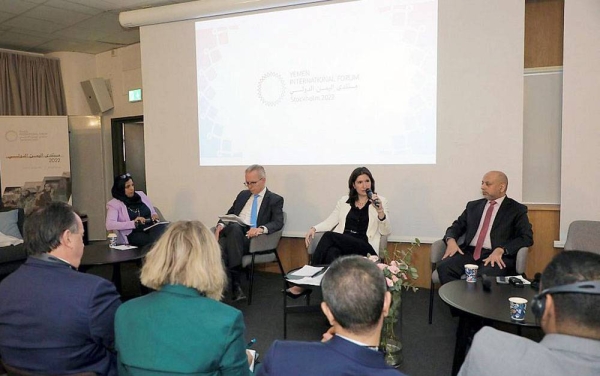 Saudi Development and Reconstruction Program for Yemen (SDRPY) is participating in the Yemen International Forum 2022 in Stockholm organized by the Sanaa Center for Strategic Studies in cooperation with the Folke Bernadotte Academy, to boost the development and economic paths, and to contribute to enhancing the forum’s sessions and workshops with its experiences and its visions on development and economic recovery.
During its participation, SDRPY reviewed at Forum the program's experiences, strategy, and methodology in implementing development projects and initiatives and strengthening strategic partnerships, as well as its development experiences in creating a new business model to ensure focus on projects with direct impact.

SDRPY also placied the principle of sustainability at the heart of these plans and programs, and translating this into several measures that contribute to strengthening institutions and building their capacities for resilience, recovery, and sustainability.

The head of the SDRPY delegation, Dr. Adel Al-Qassadi, during his participation in the main panel discussion on (Economic Recovery: Shifting from Reliance on Humanitarian Relief to Development Support), said “We need to link between the humanitarian and the development tracks in Yemen, and there is a need for a complete vision of economic recovery that does not depend on what is provided by donors”.

The three-day forum, which runs from June 17-19, 2022, will discuss major issues in Yemen related to the political situation, peace endeavors, and the economic file.

Saudi Arabia, under the leadership and directives of Custodian of the Two Holy Mosques, King Salman, and Crown Prince Mohammed Bin Salman, deputy prime minister and minister of defense, is keen to support and stand by Yemen to raise the living standard and the economy.

The Kingdom’s most recent support to Yemen was the provision of urgent support to the Yemeni economy in April 2022, amounting to $3 billion, of which $2 billion were equally provided by the Kingdom and the United Arab Emirates, in support of the Central Bank of Yemen.

This is in addition to development programs worth $829,073,978 up to 2021, with a total number of beneficiaries amounting to 14.6 million in 14 Yemeni governorates.

SDRPY also supervised the $422 million worth of Saudi oil derivatives grant presented in 2021, which was delivered to various Yemeni governorates and contributed to improving services in vital sectors.

It also assisted in improving the lives of Yemeni citizens, raising the capabilities of Yemeni institutions working in the field of electricity, and reducing power blackouts and contributed to alleviating the burden on the Budget of the Yemeni government.
Add Comment