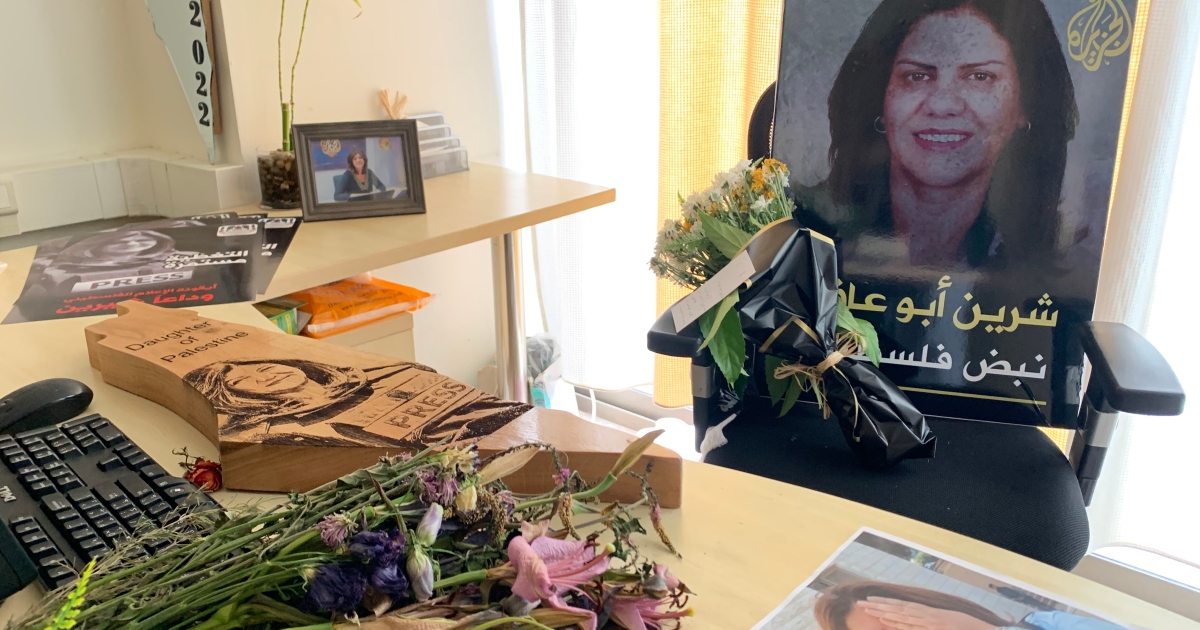 Colleagues of the slain Al Jazeera journalist say in life and death, she inspired them to tell the story of Palestinians.

More than 10 days after Palestinian journalist Shireen Abu Akleh was shot dead while reporting on an Israeli raid, the whole of Palestine is still grieving.

Her colleagues, many of whom were the first to learn of her death, have been struggling to process the devastating events of the past two weeks.

Many at Al Jazeera’s Ramallah bureau first received news that Abu Akleh was critically wounded through a distressing voice note sent by a local journalist in Jenin, north of the occupied West Bank, at about 6:30am (03:30 GMT) on May 11.

The excruciating voice told them that Abu Akleh had been shot and was on the ground. “Ambulance! Shireen’s been injured. The military is shooting at us. Shireen! Shireen!”

Within minutes, many of them were either in front of, or behind the camera, doing live news bulletins and telling the whole world the dreadful news as they received it: “Shireen was dead.”

While still in shock over losing not only a dear colleague and friend, but also a person whom many considered family, Abu Akleh’s colleagues are now more adamant to tell the story of Palestine, the way the journalist – dubbed “the voice of Palestine” – spent her lifetime, and even death, doing.

For many around Palestine and the Arab world, Abu Akleh will be remembered for her famous sign-off, in her characteristically calm and collected voice.

But for others, especially her colleagues, a more recent quote of Abu Akleh’s resonates more strongly and remains engraved in both their hearts and minds: “I might not have been able to change the reality but, at least, I conveyed that story to the world.”

“I’ve never been more adamant to tell the story,” said Rania Zabaneh, a news producer with Al Jazeera, who worked with Abu Akleh for 20 years.

For Nida Ibrahim, Al Jazeera English’s occupied West Bank correspondent, Shireen’s death has been a “turning point” in her life and journalistic career.

“Many of us, Palestinian journalists, have found our voices in hers,” said Ibrahim. “Her death made me more dedicated to telling the story of our people, like Shireen who remained objective and Palestinian.”

From news producers to cameramen, editors to correspondents; from people Shireen only met a few months ago, to others whose relationship spanned decades, her colleagues all repeated – if in their own words – that same message.

“Our voices are being targeted because we have something to say – the story of where we live – and for that, we’ll stay strong,” said Ibrahim.

Grieving through the memories

Walking through the streets of Ramallah, the city where Abu Akleh spent the major part of her career, photos of the veteran Al Jazeera journalist can be seen adorning the walls of shops and cafes. Large posters of her face drape building tops, and a huge screen in the Al-Manara Square in the heart of the city lights up with her face every night. 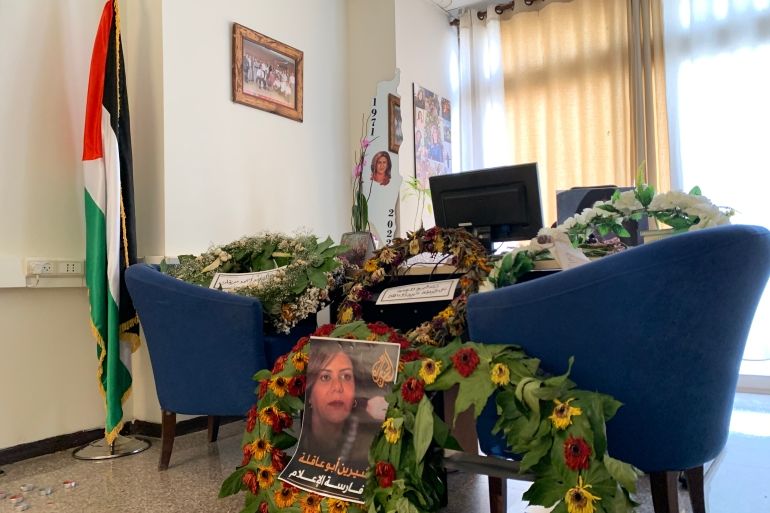 Shireen’s office has become a little memorial in her memory

At the Al Jazeera bureau, her photos are everywhere. Abu Akleh’s office, now a little memorial, is filled with flowers, candles, and farewell notes, commemorating her long career and the legacy she left behind.

Born in 1972 in Jerusalem, Abu Akleh spent nearly 30 years reporting from the occupied Palestinian territories and Israel, covering the second Intifada, the death of Yasser Arafat, the Israel-Lebanon war, wars on Gaza, and multiple Israeli incursions in the occupied West Bank and East Jerusalem.

In between lives and news developments, her colleagues huddle around endless cups of Arabic coffee and cigarettes, to reminisce about their good times with Abu Akleh, as well as the more difficult ones in the field.

As if a way to help them grieve, they swipe through old photo albums on their phones and wade through notes she wrote in preparation for a story, or books she read to understand the nitty-gritty of a topic she was about to report on.

Through the tears and emotions, they recall her most memorable qualities: kind, humble, smart, passionate, funny, professional, and most of all a human.

“Shireen was an example of the ‘human journalist’,” said Mariam-Mayssa Salameh, a news producer at Al Jazeera’s Ramallah bureau, who worked with Shireen for 23 years.

“Her death is a huge loss for a whole generation of young journalists – especially women – who looked up to her as a teacher and someone who showed the way of how to a professional journalist and human at the same time,” she added.

“There was so much oppression, injustice, and inhumanity in what she reported on,” said Zabaneh. “It was those things that she connected with most – the stories others didn’t want to report.”

She explained that an example of those stories was Israel’s infamous “number cemeteries” – mass graves for the remains of unidentified Palestinians that were marked with numbers rather than names.

Adding on that point, Faten Alwan, a fellow Palestinian journalist in Ramallah and Abu Akleh’s friend for the past 22 years, said: “Before asking for an interview with the family of a martyr, Shireen would pay her respects and make sure that the family actually wanted to speak.”

“She always reminded me that being human came first and above everything,” added Alwan.

To many viewers, Abu Akleh was a hard shell. Although her eyes reflected deep emotions, both happy and sad, about everything she reported on, the Palestinian icon was perceived as strong and hard to break.

For her colleagues and friends, Abu Akleh was that, but also a very sensitive and even childlike soul in her purity and simplicity. 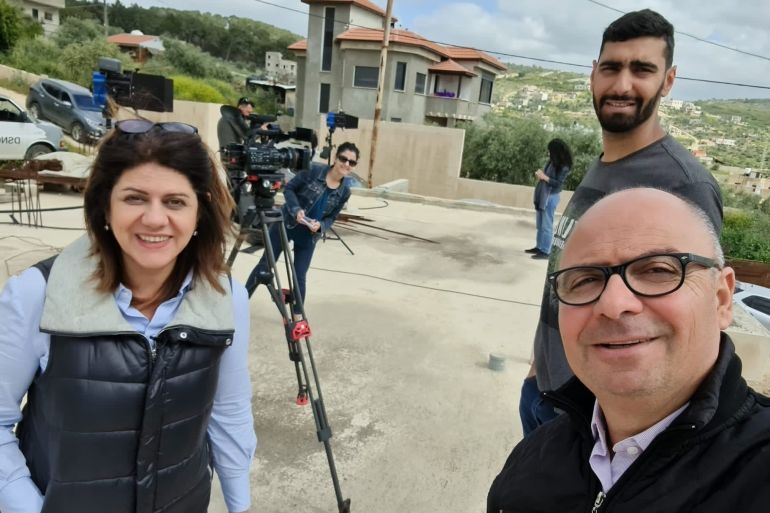 Shireen Abu Akleh and her colleagues in the field

Her colleagues remembered how Abu Akleh fell in love with her Maltese dog Felfil, and how she would fly to the United States – where the dog sometimes stayed with her brother’s family – just to see him. Despite being allergic to cats, she kept dozens of cans of cat food under her desk to feed those on the streets.

Her colleagues explained how she kept a unique balance of being an experienced and professional journalist who many times acted as their mentor, and yet also serving as their “younger sister” who they took care of and helped manage daily life.

“Shireen had a small family in Jerusalem – her brother and his kids – who she always took care of. We took care of her here in Ramallah,” recalled Wessam Hammad, who was also her neighbour and regularly drove her to work or helped sort out her electricity bills.

Hammad, a news producer who worked with Abu Akleh for the past 17 years, added: “Shireen was afraid of heights and she couldn’t do lives from our eighth-floor terrace. So, we set up a cable especially for her so that she could stand in the street down below.”

Wajd Waqfi, Al Jazeera’s Washington correspondent who arrived in Ramallah to assist with the news coverage after Abu Akleh’s death, incidentally used the cable a few days ago for a live news bulletin.

“A woman walked up to me, crying and saying: ‘Shireen isn’t dead, she’s right here,’” recalled Waqfi, who was a colleague and friend of Shireen’s for the past decade.

Hammad explained that the so-called “Shireen cable” set up in 2019 in that location was used by no one else, and so the woman rushed to the assumption when she glimpsed Waqfi from the back.

They retold moments of how despite her passion and bravery, she never risked the lives of her team while covering dangerous events.

“Shireen was careful and calculated – never reckless about her life or that of others,” said Hammad. “It’s still a shock how she died.”

As he sat at his desk, he told the story of a pulverised grenade with a picture of Abu Akleh along with Zabaneh and himself printed inside it. He remembered how the photo was taken by another journalist moments before the grenade went off. The photojournalist later picked up the grenade, printed the photo on its inside, and gave it to them as a gift.

“I fought with Shireen to keep it, and I won in the end,” he said, as he looked at it longingly.

Capturing their feelings, Zabaneh said: “Shireen was our voice for more than two decades. She dedicated her life to tell the Palestinian story from a human perspective – she’s always been about details of daily life under occupation. It’s time to raise her voice and do what we can to bring her justice.”