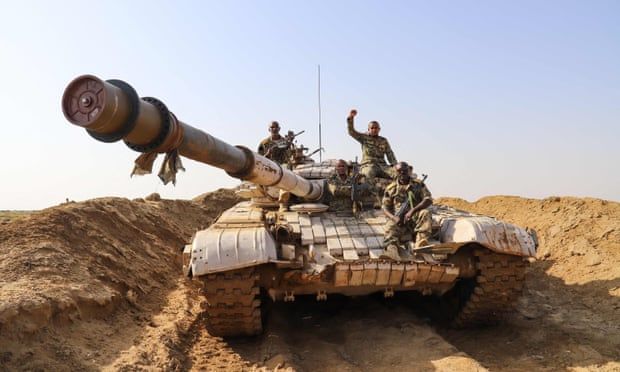 Department for International Trade sent invitations even though nations are of ‘particular concern’
Six nations listed by the Foreign Office as “human rights priority countries” have been invited by the British government to send delegations to Europe’s biggest arms fair, which begins in London’s Docklands on Tuesday.

Among those invited is Saudi Arabia, to which the UK has allowed the export of £20bn of arms that could be used in the war in Yemen, a bloody seven-year conflict that the UN says has caused the world’s biggest humanitarian crisis.

The other countries formally invited by the Department for International Trade (DIT) to the bi-annual DSEI (Defence and Security Equipment International) arms fair at London’s Excel that are considered to be a human rights concern were Bahrain, Bangladesh, Colombia, Egypt, and Iraq.

Delegates from those countries will be able to mingle with over 800 exhibitors, including 90% of the world’s top 10 arms manufacturers, during a four-day international event that is going ahead despite the global Covid pandemic.

Samuel Perlo-Freeman, research coordinator at Campaign Against Arms Trade (CAAT), said the presence of the six countries shows the UK is “not serious about arms export controls, or global peace, human rights, or good governance”.

The six appear on a 30-strong list first compiled by the Foreign Office in 2019. Last November, junior foreign office minister Lord Ahmad said they covered nations “where we are particularly concerned about human rights issues, and where we consider that the UK can make a real difference”.

One issue raised by the UK in the case of all six was internal repression, including the suppression of demonstrations in both Egypt and Iraq.

DSEI features a security zone which, according to its website, is “a showcase of security equipment, technologies, strategies and systems to counter priority threats, such as cyber-attacks as well as border, infrastructure, crowd and crisis security”.

The invitations were confirmed in a parliamentary answer to Green MP Caroline Lucas from the DIT sent on Friday. A total of 61 countries were asked to send delegations, ranging from the US to Vietnam.

DSEI is one of the largest trade shows held at the convention centre, and takes place with the support of the British government and the help of a heavy policing operation, which cost £2.4m when the event was last held in 2019.

Ministers have approved a Red Arrows flypast on Tuesday lunchtime as DSEI opens, reflecting the fact that the event is intended, according to officials, to “showcase Britain to the world”. A frigate, HMS Argyll, will also dock in the adjacent harbour, while a string of helicopters are expected to fly in.

Organisers say the event is about 70% the size originally planned – partly because Covid travel restrictions are preventing people from red-list countries such as Turkey participating. But the number of named exhibitors, at around 830, is roughly half the 1700 that set up stands two years ago.

Protesters have spent the last week trying to disrupt the setting up of the event, and the Metropolitan police say several arrests have been made.

They will gather again on Tuesday at the site’s western entrance for a day of speeches as part of a “Tank the Arms Fair” demonstration, including a joint address from CND chair Kate Hudson and fashion designer Vivienne Westwood.

Meanwhile, at around the same time, Jeremy Quin, the UK’s defence procurement minister, is expected to make an announcement about the future use of lasers by the British armed forces – and highlight the importance of close links between the military and its industrial suppliers.

Sarah Wiseman, the head of exports policy at the MoD, said at a launch event the goal of events such as DSEI is to create “more strategic relationship with industry” and emphasised the role of the sector in creating jobs. “Over 200,000 people were directly or indirectly employed by the defence industry” across the UK, she added.