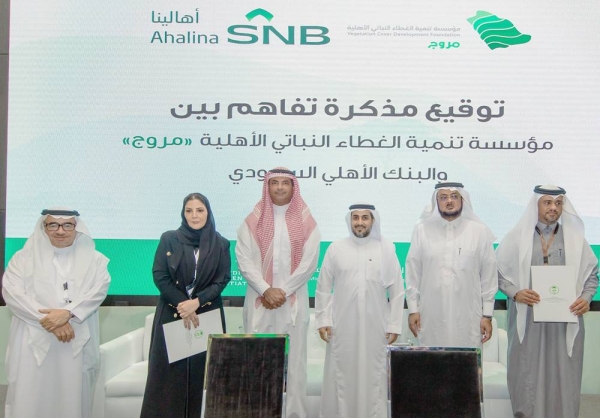 SNB has concluded a number of green initiatives with the Ministry of Environment, Water and Agriculture (MEWA), which was represented by the National Center for Vegetation Cover Development and the Combating Desertification and the Vegetation Cover Development Foundation “Murouj,” to combat desertification under the guidance and supervision of the Ministry.
This took place in the presence and patronage of the Minister of Environment, Water and Agriculture, Eng. Abdul Rahman Bin Abdul Mohsen Al Fadhli; the Deputy Minister of Environment, Water and Agriculture, Eng. Mansour Bn Hilal Al Mushaiti; National Center for Vegetation Cover Development and Combating Desertification CEO Dr. Khalid Bin Abdullah Al Abdul Qader; and Talal Bin Ahmed Al Khuraiji, SNB’s CEO of Wholesale Banking, during the activities of the "Launching Workshops for Studies of the Saudi Green Initiative" forum, which was held recently at the Fairmont Hotel in Riyadh and organized by MEWA.

This is an extension of SNB’s strategy, which focuses on being an active contributor to the development of the local community in accordance with the best international environmental and social standards, in order to achieve the goals of “Saudi Vision 2030” and actively contribute to the Saudi Green Initiative, since protecting the environment and preserving its natural components are religious, moral, and humane duties, regarded as a responsibility towards future generations, as well as being one of the fundamentals to ensuring the quality of life.

The agreement was signed in conjunction with World Environment Week in the Kingdom by Eng. Wael Bin Adli Boushah, CEO of the Vegetation Cover Development Foundation "Murouj" and Ms. Basma Al-Jawhari, SNB’s head of Corporate Responsibility.

The agreement includes three initiatives, the first of which is the environmental afforestation initiative, which aims to increase green area and contribute to the development of vegetation cover while combating desertification, thereby contributing to the restoration of biodiversity in natural environments, environmental protection, and the improvement of quality of life.

The agreement also included the green mosques initiative, which aims to benefit from gray water generated by ablution in mosques after it has been treated to be suitable for irrigation. This helps to increase the vegetation cover in mosque courtyards while also reducing waste water. This will be accompanied by special water-providing projects in mosques and their courtyards for mosque visitors and picnickers.

Finally, the Ecothon initiative, which is a virtual marathon that aims to bring together entrepreneurs, technical experts, and those interested in the environment in general and the vegetation cover system in particular, in order to generate creative and innovative ideas that benefit the environment.

Eng. Boushah expressed his gratitude and appreciation to SNB for its effective contribution, which reflects its distinguished and pioneering role in fulfilling corporate responsibility. He believes that this agreement will have a direct impact on environmental protection and the improvement of quality of life.

Al-Jawhari, for her part, emphasized SNB’s pride in reaching this agreement with the Ministry of Environment, Water and Agriculture, which is at the heart of the Saudi Green Initiative, based on the Bank’s pioneering role in the field of environmental protection, which qualifies it to take the lead in various initiatives that contribute to the local community’s development.

Based on its pioneering role, SNB initiatives pave the way for strengthening the strategic partnership with the MEWA. Under the umbrella of its corporate responsibility program, “Ahalina”, the Bank has adopted early on a wide range of qualitative initiatives in the field of corporate responsibility with direct and effective voluntary participation by the Bank employees, making it one of the most prominent private sector representatives in the Kingdom when it comes to its activity and interest in this field.
Add Comment