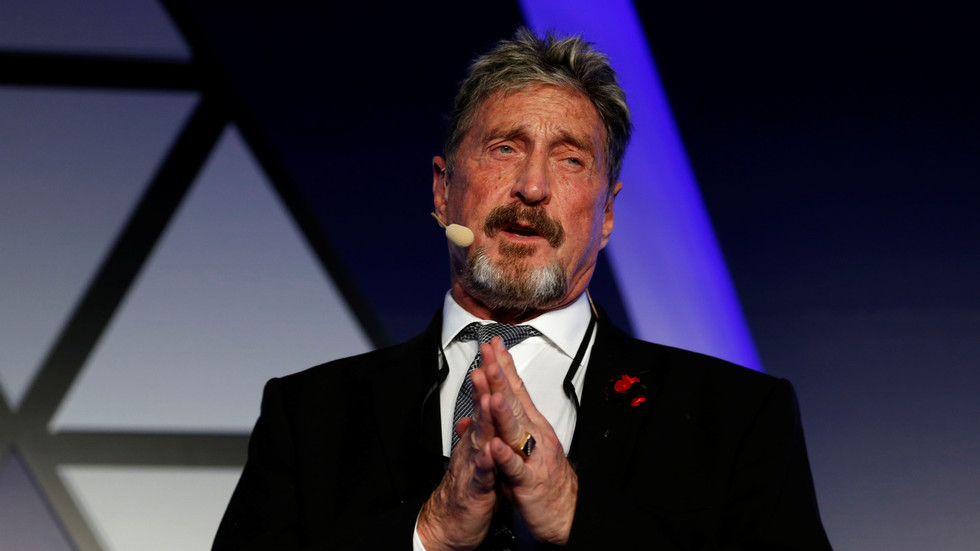 ‘Sounds like one of John’s tweets’: McAfee’s doubtful widow shares PHOTO of his alleged suicide note

Posting a picture of John McAfee’s alleged suicide note, his widow Janice argued it sounded more like a draft tweet. She continues to doubt the official explanation by the Spanish authorities that McAfee hanged himself in prison.

“This note does not sound anything like someone who has no hope and is contemplating ending their life. This note sounds like one of John's tweets,” she said on Tuesday.

Much of the text on the handwritten sheet is crossed out, leaving phrases like “phantom parasite” and “control my own future, which does not exist,” and describing knowledge as “mere ashes of memory.”

Most of the people responding on Twitter seemed to agree with her interpretation. “I feel sure if it was a suicide note he would have mentioned you – told you he loves you and his family,” one person wrote. “All of the mark throughs tells me this is a draft of something he was trying to write but not to end his life.”

“If I killed myself, I would have at least decided *why* I was doing it. I wouldn't still be working on the first draft,” said another.

Spanish authorities said that McAfee, 75, was found dead inside his jail cell in Barcelona on June 23, after a judge ruled to allow his extradition to the US on tax evasion charges. The eccentric ex-millionaire had repeatedly said he would never commit suicide.

In a follow-up tweet, McAfee's widow said the handwriting on the note was "suspect" and that she doubted its authenticity.

"It reads more like someone trying to imitate John’s style of tweeting," she said. "And if this note was found in his pocket where are the markings of the note being folded into his pocket?"

Janice, who married McAfee in 2013, has refused to accept the official account of her husband’s death. Last week, she said there was “clearly a cover up happening.”

“We have not received the death certificate, the official autopsy report or the official report from the prison,” she said in a statement. “I understand that things take time but the lack of cooperation from the Spanish authorities only confirms our suspicions that they have something to hide.”