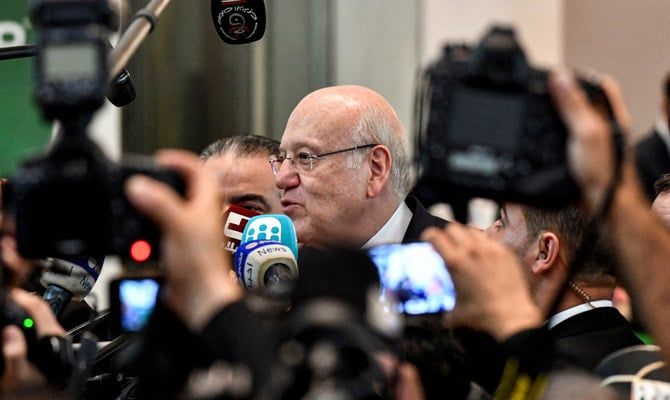 Lebanon’s caretaker prime minister and the Saudi ambassador in Beirut underlined the importance of the Taif Agreement at a conference on Saturday.
Ambassador Walid bin Abdullah Bukhari organized a forum at the UNESCO Palace in Beirut that brought together over 1,000 political, economic, diplomatic, and academic figures.

It included those who participated in drafting the Taif Agreement, veteran diplomat Lakhdar Brahimi, who played an important role in reaching the pact, Walid Jumblatt, the head of the Progressive Socialist Party, MPs from the Free Patriotic Movement and presidential candidate Suleiman Franjieh.

Thirty-three years since the signing of the agreement, which ended 15 years of civil war in Lebanon, under Arab and international sponsorship, Saudi Arabia, the main player in reaching the agreement, reaffirmed its keenness on national reconciliation in Lebanon.

The forum was held against the backdrop of a campaign launched against the Taif Agreement by Hezbollah and its ally, the FPM.

Caretaker Prime Minister Najib Mikati said the forum is proof that Saudi Arabia still stands by Lebanon, and the large attendance shows that everyone agrees that the agreement is still the best one to implement.

Bukhari reiterated the keenness of Saudi Arabia and its leadership on Lebanon’s security, stability, and unity.

“We urgently need to embody the formula of coexistence addressed by the Taif Agreement, i.e. preserving the irrevocable Lebanese entity and conserving Lebanon’s identity and Arab belonging.”

Speaking about the French initiative to hold a national dialogue between the Lebanese parties, Bukhari noted that France, headed by President Emmanuel Macron, stressed that there is no French intention to review the Taif Agreement or amend the constitution.

He also recalled former Prime Minister Rafik Hariri and the late Saudi Foreign Minister Prince Saud Al-Faisal “who were the heroes of the Taif Agreement.”

Brahimi said: “The Taif Agreement paved the way for the Lebanese to build their new state. We had pinned hopes on the tripartite committee that was formed to accompany the Taif implementation process, and this was the will of King Fahd bin Abdulaziz and other Arab leaders, but Iraq’s invasion of Kuwait halted the committee’s work.”

Lebanon’s former premier, Fouad Siniora, said: “Electing a president that believes in the Taif Agreement is the most important thing to complement constitutional authorities and this requires good intentions from everyone.”

Walid Jumblatt said that “before looking into amending the Taif Agreement as proposed by some people, we should implement its terms, as well as other annexed terms, and eventually abolish political sectarianism according to a plan included in the agreement,” calling for the formation of a committee for this matter.

“All of this is meaningless as long as we don’t elect a president and subsequently form a credible government that implements the necessary reforms leading to economic and financial recovery.”

Priest Boulos Matar, representing the Maronite Patriarchate, said: “Christians and Muslims constitute one nation in the Taif Agreement. In Lebanon, we are brothers in nationalism, Arabism and humanity, so I urge the Lebanese to put their conflicts under the roof of fraternity.

“The political system is subject to change based on a dialogue that should not cease.”

UN Special Coordinator for Lebanon Joanna Wronecka said the Taif Agreement is reaffirmed by international resolution 1701 in many clauses. This agreement set a frame to end sectarianism and strengthen peaceful coexistence. It also established a new political system that meets the aspirations of the Lebanese. Efforts should be made to implement the agreement in a way that guarantees the stability of Lebanon.”

Former MP Boutros Harb, who played a role in the Taif Agreement, said: “It is easy to criticize the agreement today but the killing and bombing that Lebanon had witnessed back then weren’t easy. The new formula required everyone’s compromise for Lebanon’s benefit.

Former MP Edmond Rizk said that “the essence of the agreement is a civilized partnership in a free system. There is no coercion in patriotism and the issue is not the text of the agreement.”

Researcher Nizar Younes criticized turning Lebanon into a sectarian quota state through post-Taif practices and by replacing the Arab identity with populist identities.

He said: “If we don’t implement the Taif Agreement, we cannot preserve Lebanon.”
Add Comment