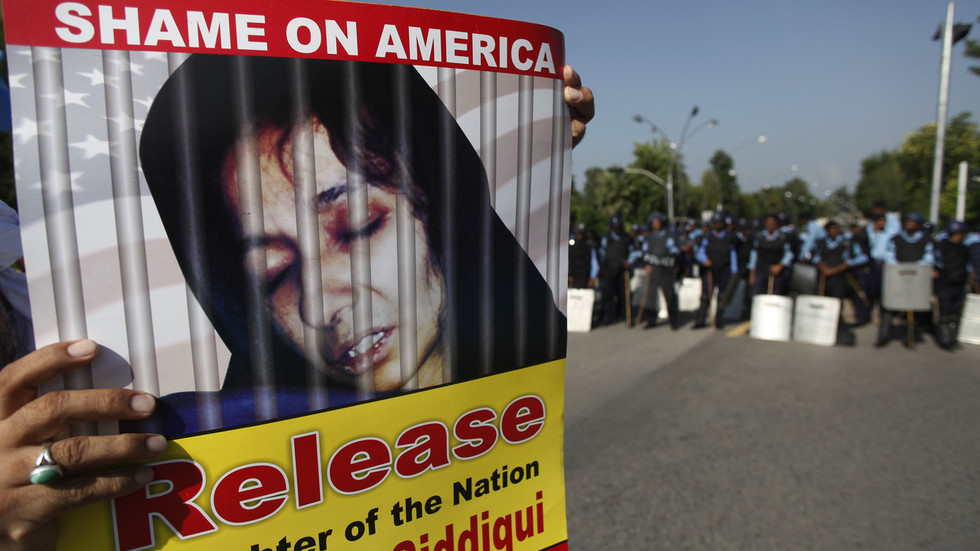 While the identity of the hostage taker has yet to be confirmed, ABC News and NBC News reported, citing US officials, that the suspect told police he was a "brother" of Aafia Siddiqui, a Pakistani neuroscientist serving an 86-year sentence in the US. The woman who was dubbed “Lady Al-Qaeda” by the Western media was convicted in 2010 “for the attempted murder and assault of US nationals and US officers and employees in Afghanistan.”

During the livestream, the man reportedly referred to his "sister" and threatened that he was ready to die and kill hostages if anyone entered the building, which had held Shabbat services shortly before he entered.

The man has reportedly been negotiating with police for Siddiqui's release. She is currently serving her sentence in Fort Worth, Texas, which is only a short distance from Colleyville, where the incident took place. The hostage-taker has said he is armed with explosives, according to sources speaking to ABC News.

A lawyer for Muhammad Siddiqui, the woman's biological brother, however, told the Daily Beast on Saturday that his client was not the hostage-taker.

Siddiqui was arrested in 2008 and charged with shooting at FBI agents and US soldiers looking to interrogate her in Ghazni province in Afghanistan.

The US military questioned the woman a day after she was arrested by Afghan authorities on July 17, 2008. The FBI claimed that Afghan forces discovered a number of handwritten notes on her that cited a "mass casualty attack" and mentioned an array of important locations around the US, including the Empire State Building, the Statue of Liberty, Wall Street, as well as the Brooklyn Bridge. The FBI alleged that Siddiqui managed to grab a US officer's rifle while she was being held “unsecured, behind a curtain” in a room at an Afghan police compound as her interview was about to start. Siddiqui then allegedly fired at a US Army officer and several other servicemen before she was restrained. Siddiqui ended up being shot in the stomach by a soldier, while nobody else was hurt in the incident, which ultimately paved the way for her extradition to the US.

Siddiqui is also believed to have been married to Ammar Al-Baluchi, the nephew of accused 9/11 mastermind Khalid Sheikh Mohammed. The US government alleged she had disappeared after he was brought into custody in 2003, prompting them to place her on the FBI's 'Most Wanted’ list.

There has been an ongoing public campaign in Pakistan for the woman’s return. In October, a crowd of protesters gathered outside the Pakistan Consulate in New York to demand her release, while calling her a “political prisoner” and an innocent victim of the US’ War on Terror. Activists have also claimed Siddiqui is being mistreated in prison, having been attacked in July, resulting in burns and solitary confinement.

The Pakistani Senate passed a resolution calling her ‘Daughter of the Nation’ in 2018, while Pakistani Prime Minister Imran Khan expressed support for her release and even reportedly discussed the issue with former US President Donald Trump.
#Donald Trump  #Afghanistan
Add Comment