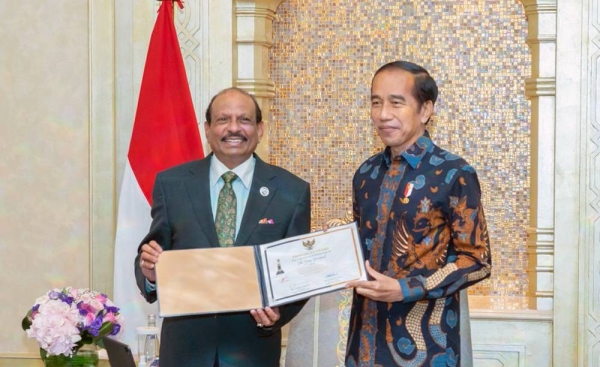 Yusuff Ali MA, chairman of Abu Dhabi-based LuLu Group, has been honored by the Indonesian government with the Prima Duta Award 2021, one of the highest honors in the country. The prestigious award is given to recognize contributions made in the economic & commercial sectors of Indonesia.
The prestigious award was presented by Indonesian President Joko Widodo to Yusuff Ali MA at a ceremony held at Emirates Palace in Abu Dhabi in recognition of the strategic investments made by LuLu Group in Indonesia, which has given huge boost to the country's economy and created employment opportunities for its citizens.

The sourcing facilities in Indonesia is partnering with thousands of Indonesian farmers, fishermen, small scale entrepreneurs, medium and large-scale factories among others for this initiative. The group also exports rice, noodles, cookies, potato snacks, wafer biscuits and fish products in its own Lulu Brand from Indonesia to all GCC countries.

“Proud and humbled to receive one of the top honor from Indonesia and I am very much thankful to the president and the government of Indonesia. This recognition would further encourage us to have a strong presence in the commercial sector of Indonesia,” said Yusuff Ali on receiving the award.
Add Comment