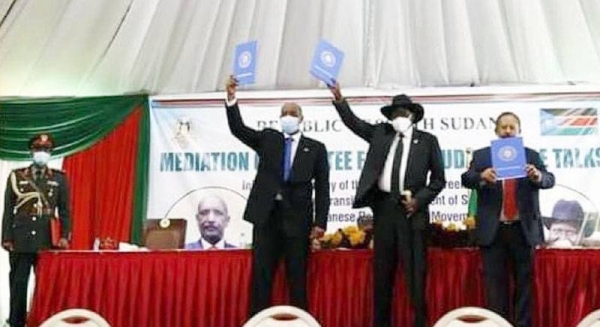 The Troika, made up of the US, the UK and Norway, commended on Sunday the Sudanese people as they celebrate the first anniversary of the signing of Juba Peace Agreement (JPA).
"This historic agreement responds to the Sudanese people's calls for freedom, peace and justice, especially from those affected by conflict across Sudan," the Troika said in a statement.

"We commend the JPA signatories for upholding their partnership and urge the parties to recommit to fully implement the agreement," it noted. Meanwhile, the Troika voiced deep concern by "delays implementing commitments made one year ago."

"We urge all JPA signatories to demonstrate leadership and work together to refocus on implementation to deliver much needed peace and security for the people," it stressed.

It continued it is disappointed with the lack of momentum in peace negotiations with the SPLM-N (Sudan's People Liberation Movement-North) Abdelaziz Alhilu," urging Chairman Alhilu and the government of Sudan "to return to Juba and negotiate on the basis of the March 2021 Declaration of Principles."

"Lastly, the Troika notes with concern the growing unrest in Eastern Sudan and condemns all actions that threaten Sudan's stability and economy," it continued.

It added, "We encourage the government and all Eastern parties to engage in dialogue to address legitimate grievances on the basis of the Constitutional Declaration and the JPA."

The Troika affirmed it "remains committed to supporting the government of Sudan and the JPA parties to deliver their vision for lasting peace as part of the democratic transition agreed in 2019.""The Troika looks forward to continuing our support to the parties and all Sudanese in the realization of a lasting peace," it concluded.

The Troika applauds the strides made toward transitional justice including the government’s cooperation with the International Criminal Court (ICC).

It said, “We welcome the Cabinet’s stated commitment to hand over former President Omar Al-Bashir and the other former officials subject to international arrest warrants.

It added, “We urge the government to move quickly on this commitment and to make progress on establishing the Special Court for Darfur. Due legal process will help give justice to victims and support the process for reconciliation.”
Add Comment