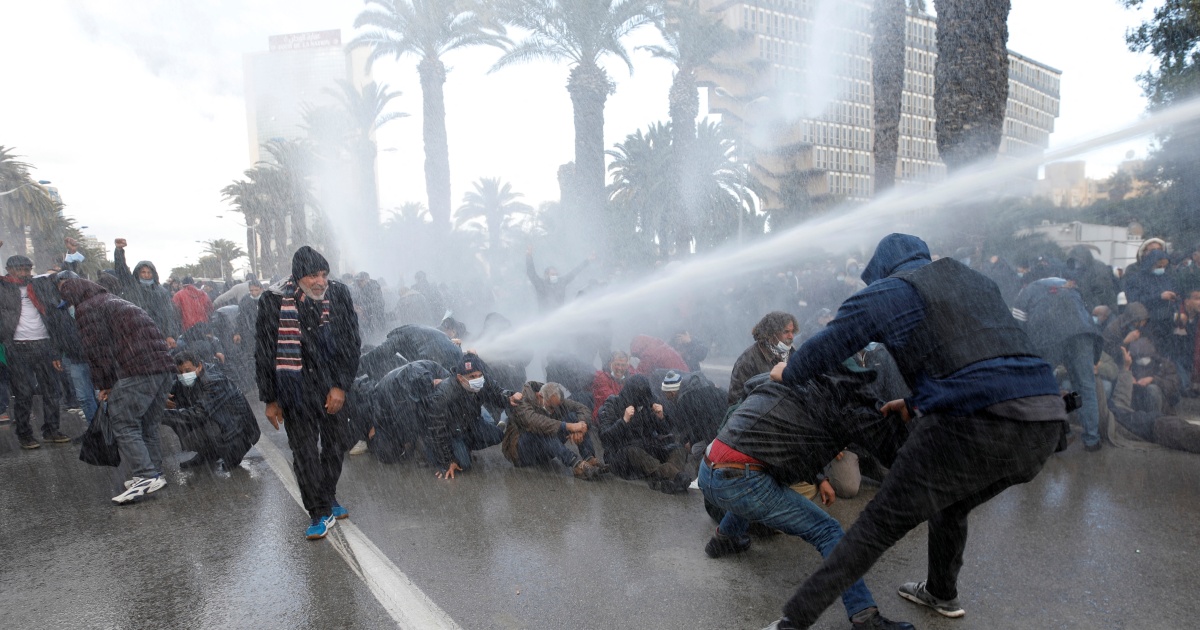 The Tunisian police have used water cannon, sticks and tear gas to disperse hundreds of protesters trying to reach central Tunis to demonstrate against the president in defiance of COVID-19 restrictions.

A heavy police presence on Friday prevented the protesters from gathering on Habib Bourguiba Avenue, the main street in the centre of the capital that is the traditional focal point of demonstrations, including during the 2011 Tunisian uprising that ushered in democracy.

Police then tried to disperse several different groups of protesters, at least one of which had hundreds of demonstrators, witnesses said. Dozens of police cars stood in the area and two water cannon were placed outside the Interior Ministry building, which is located on the same street.

Some demonstrators broke through a police cordon before police baton charges and tear gas and water cannons pushed them back.

“It’s the most violent intervention by security forces we’ve seen in the past year, both in terms of the methods used and the number of arrests,” said Fathi Jarai, president of the independent anti-torture body INPT.

Opposition parties, including Ennahdha, have been protesting against the suspension of parliament by President Kais Saied, assumption of executive power and moves to rewrite the constitution, which they call a coup.

Saied seized governing powers in late July. He has denied the coup allegations and promised to uphold rights and freedoms won in Tunisia’s 2011 revolution that triggered the Arab Spring uprisings across the region.

Friday’s protest goes against a government ban on all indoor or outdoor gatherings, which was announced on Tuesday to stop a COVID-19 wave.

“Today Saied’s only response to opponents is with force and the security forces … it is so sad to see Tunisia like a barracks on the date of our revolution,” said Chayma Issa, an opposition activist.

Ennahdha, the party with the largest number of seats in Tunisia’s suspended parliament, and other parties taking part in the protest accused the government of introducing the ban and resuming its night curfew for political rather than health reasons as a way of preventing protests.

Friday falls on what Tunisians had previously marked as the anniversary of the 2011 revolution, the day longtime ruler Zine El Abidine Ben Ali fled the North African country.

However, Saied decreed last year that instead of falling on the anniversary of Ben Ali’s departure into exile, it would be marked on the December anniversary of the self-immolation of a street vendor, which triggered the uprising.

“So just by coming out today, it’s a big demonstration that people are disobeying his [Saied’s] decrees,” journalist Elizia Volkmann reported from Tunis on Friday.

“COVID numbers, and the Omicron variant, are indeed on the up and there’s a fear of a really severe surge, but opposition politicians are accusing Kais Saied of using COVID as an excuse to block demonstrations.”

Though Saied’s action in July appeared very popular at first after years of economic stagnation and political paralysis, analysts say he appears to have since lost some support.

Since Saied’s intervention, several senior politicians and business leaders have been detained or subjected to legal prosecution, often involving cases of corruption or defamation.

On Tuesday, the country’s press syndicate said Tunisian state television has barred all political parties from entering its buildings or taking part in talk shows in a serious setback for press freedoms.

“We’re here to defend the institutions of the republic,” she said. “This people, which toppled a 23-year dictatorship, is not going to let another dictator take its place.” 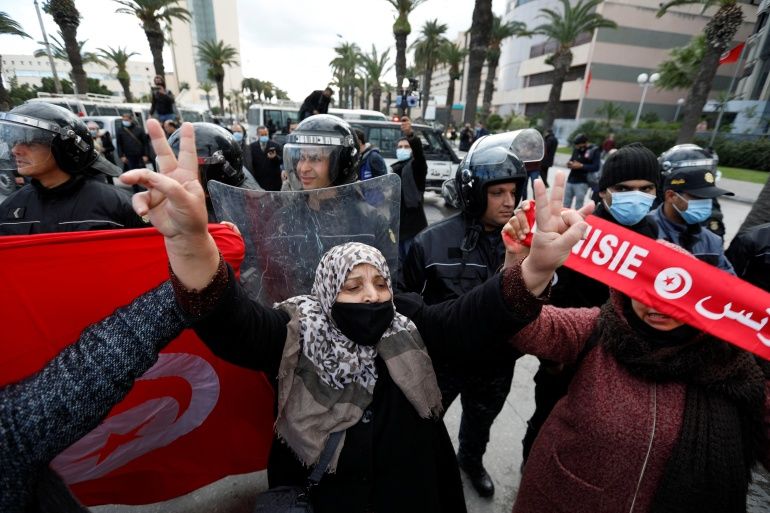 Hundreds of people protested in central Tunis on Friday

Tunisia’s economy remains mired by the pandemic, there has been little progress in gaining international support for the fragile public finances, and the government Saied appointed in September has announced an unpopular budget for 2022.

The Tunisian president started preparing a new constitution that he has said he will offer to a referendum in July.

The vote will take place following an online public consultation that will start in January. Parliamentary elections are also expected to take place at the end of 2022.