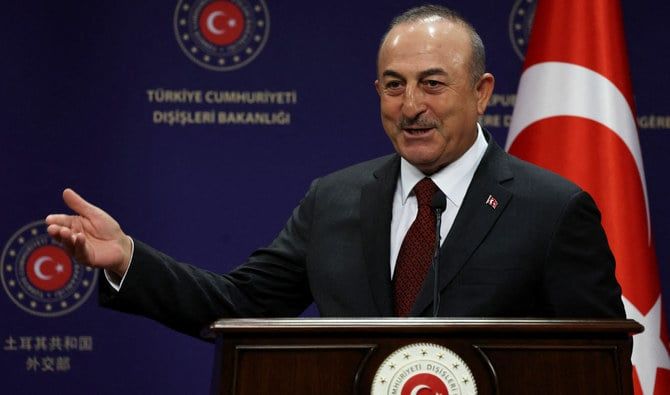 Turkish Foreign Minister Mevlut Cavusoglu has announced that he will visit the US this month, as Ankara starts the new year with a diplomatic push in Washington.
He will arrive on Jan. 17 and, among other engagements, meet US Secretary of State Antony Blinken the following day. He might also travel to Houston to open Turkiye’s new consulate there.

It will be the first official visit to the US by a senior member of the Turkish government since President Joe Biden took office two years ago.

The US Treasury Department, meanwhile, said it was taking joint action with Turkiye against a network it said played a key role in money management, transfer and distribution for Daesh operating in Iraq and Syria.

The Turkish Foreign Affairs Ministry said on Twitter the assets of seven individuals or legal persons involved in financing for the group were frozen.

The US Treasury Department said four individuals and two entities in Turkiye were designated under US sanctions.

Cavusoglu’s diplomatic discussions with American officials during the trip are likely include several thorny issues affecting relations between the two countries, including his country’s ongoing rapprochement with the Assad regime in Syria and the saga over Turkiye’s attempt to purchase 40 F-16 fighter jets, which has been rumbling on since October 2021.

Rich Outzen, a senior fellow at the Atlantic Council, said that cooperation on Ukraine and Libya, as well as ways to reduce tensions in Syria and the Mediterranean, will also be on the agenda during the ministerial-level meetings.

“The Balkans will be also covered as Ankara is quite concerned about the recent spike in tensions between Serbia and Kosovo,” he told Arab News.

“It will be very interesting to see if Cavusoglu has meetings beyond the State Department while in DC, for instance with members of Congress, that might indicate further effort on the F16 deal,” Outzen added.

Turkiye’s efforts to overcome congressional hurdles that have been blocking its purchase of the fighter jets and equipment-upgrade kits for its existing planes are expected to be part of the discussions, amid an ongoing objection to the deal by Robert Menendez, a Democratic senator and chair of the Senate Foreign Relations Committee. Arms sales to foreign countries are subject to congressional approval.

In a message posted on Twitter last month, Menendez wrote: “I’ll say it again. I will not approve F-16s for Turkiye until Erdogan halts his abuses across the region,” hinting at ongoing tensions between Turkiye and Greece over airspace and the militarization of islands in the Aegean, and Turkish objections to the US partnership with Syrian Kurds.

In 2019, Turkiye was removed from a consortium formed to produce next-generation F-35 fighter jets. In December the following year, Congress restricted military sales to Turkiye under the Countering America’s Adversaries Through Sanctions Act, in response to Ankara’s purchase of Russian S-400 missile systems. About $1.4 billion Turkiye had paid to acquire F-35s has not been reimbursed.

Cavusoglu, who met Syrian opposition groups in Ankara on Tuesday, said that the US opposes recent Turkish reconciliation efforts with the Syrian regime. He urged both Washington and Moscow to meet their commitments to fight terrorism in Syria, in a veiled reference to the US alliance with the Syrian Kurdish YPG militia. Turkiye considers the YPG to be the Syrian branch of the Kurdistan Workers’ Party, or PKK, and has outlawed it.

Last week, the US state-owned Voice of America radio network’s Turkish service quoted a spokesperson from the US State Department as saying that the US does not support countries “upgrading their relations to rehabilitate the brutal dictator” Bashar Assad, the Syrian president.

Despite Washington’s opposition to any moves to legitimize the Assad regime, which would give further diplomatic leverage to regime ally Russia, a meeting between the Syrian and Turkish foreign ministers is expected in the second half of January to discuss a possible meeting between the presidents of both countries for the first time since the Syrian war began in 2011.

From a US perspective, Russia might engage in Turkiye-Syria talks by approving a Turkish military offensive against the YPG in return for further talks with Syrian regime, which would distract Syrian Kurds from their struggle against Daesh.

Experts do not anticipate any major breakthroughs in US-Turkiye relations during the meeting between Cavusoglu and Blinken, in light of the upcoming Turkish presidential and parliamentary elections in June.

“It would be a big surprise,” Outzen said. “Washington seems content to prevent crises in the run-up to Turkish elections this year and it doesn’t want either a breakdown or a breakthrough to become a storyline in Turkiye’s domestic political contest.”

There will therefore be an opening for progress in the months after the election, whichever side wins, he added.

“But the problems are pretty rooted, so progress might be achieved (during Cavusoglu’s visit) — but I don’t expect a big breakthrough,” Outzen said.

Ozgur Unluhisarcikli, director of German Marshall Fund of the US’s Ankara office, agreed with that assessment.

“I think we should not expect major breakthroughs in US-Turkiye relations from this visit,” he told Arab News.

“Presidential and parliamentary elections will be held in Turkiye in a few months and the Biden administration is paying extra attention to avoid being portrayed as taking sides in the Turkish political process.”

Unluhisarcikli said that on issues that are not considered particularly important or urgent, Washington will be happy to kick the can down the road until after the Turkish election.

“I think Sweden and Finland’s NATO membership and Turkiye’s request to buy new F-16 planes, as well as modernization kits for its existing F-16 fleet, would be the focal points of the Blinken-Cavusoglu meeting as they are both important issues and the latter is also urgent,” he added.

Though Washington refuses to link the two issues, Unluhisarcikli said, they are practically connected because a positive development in one would provide a boost to the other.

Cavusoglu and Blinken recently spoke by telephone and the latter expressed his concern over the situation in Syria, according to the US Department of State.
#Joe Biden
Add Comment