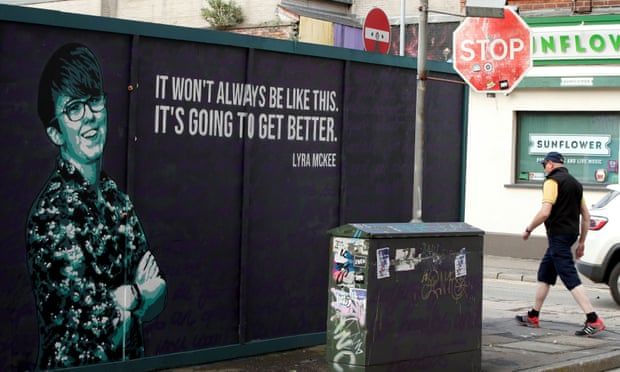 Gearoid Cavanagh, 33, and Jordan Devine, 21, both from Derry, appeared via video link at Derry magistrates court on Friday

McKee, 29, one of Northern Ireland’s most promising young journalists, was shot as she observed rioting in the Creggan area of Derry on 18 April 2019. The New IRA, a dissident republican group, admitted responsibility and said its gunman had been aiming at police.

A prosecuting lawyer told the court the police alleged Cavanagh and Devine were the men with the gunman who fired the fatal shot.

“At 11pm the gunman walks out with the gun exposed, and the prosecution case is the gunman was being escorted by Gearoid Cavanagh, who carries out a stewarding role as the gunman takes up position.”

Devine assisted, the prosecutor alleged. “He encourages the gunman when the shots are fired by punching the air. He cheers, he throws a missile, he again raises his arm, and afterwards he assists in tidying up, appearing to lift items from the ground.”

Defence lawyers said the prosecution case was feeble. “The reason that there has been such vast hesitancy over the past two-and-a-half years is no doubt because of the fact that the evidence is so poor,” said Devine’s lawyer. “We say that, given the jurisprudence in relation to identification and description, this is not a case at all.”

The judge Barney McElholm granted the defendants bail and ordered them to return to court on 7 October.

Police arrested Cavanagh and Devine, along with two other men, on Wednesday under the Terrorism Act. Det Supt Jason Murphy said the arrests were the culmination of a detailed two-year investigation into McKee’s murder and the events that preceded it.

The killing shocked Northern Ireland and there were calls at McKee’s funeral for nationalist and unionist political parties to stop squabbling and build on the spirit of the 1998 Good Friday agreement.

On the second anniversary of the death in April 2021, the National Union of Journalists launched a campaign urging witnesses to come forward with fresh information. Billboard ads appeared around Derry and thousands of letters from McKee’s family appealing for information were delivered to homes around the city.
Add Comment