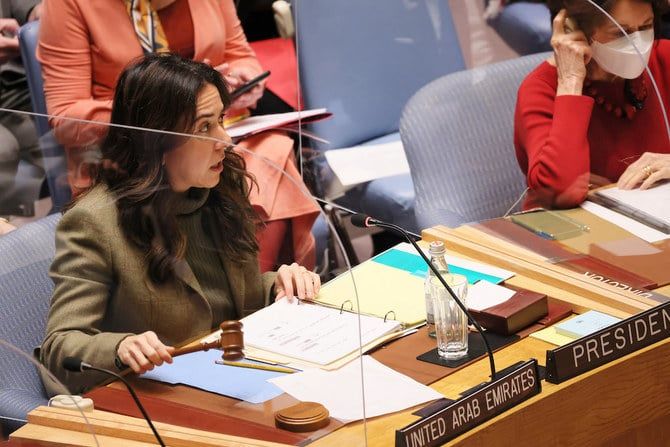 The UAE on Monday condemned a Taliban ban on women working in local and international NGOs in Afghanistan.
Assistant Minister of Foreign Affairs and International Cooperation for Political Affairs, and Permanent Representative to the UN Lana Nusseibeh warned that at a time when two-thirds of Afghanistan’s population is in need of humanitarian assistance, and 6 million people are at risk of starvation, the decision will further impede the provision of humanitarian relief in the country, WAM reported.

Nusseibeh added that the ban will affect the most vulnerable people in Afghanistan, including women, children and the elderly.

The Taliban on Saturday ordered all local and foreign NGOs to ban women staff from work until further notice. The move was condemned globally, with several foreign aid groups since announcing the suspension of operations in the country.

It comes less than a week after the administration also barred women from attending universities, prompting global outrage and protests in some Afghan cities.

She added that Islam honors the role of women and upholds their rights, noting the importance of the full and equal participation of women and girls in all aspects of life.

“The UAE will remain steadfast in its longstanding commitment to Afghanistan’s sovereignty, stability, security and prosperity in cooperation with regional and international partners,” Nusseibeh said.

She stressed that the future welfare of Afghanistan and its people will require the full inclusion of women and girls in society.

Meanwhile, UK Foreign Secretary James Cleverly called on the Taliban to urgently reverse the decision and accused them of trying to erase women from society in Afghanistan.

“Banning women from working for NGOs will prevent millions of Afghans from accessing life-saving aid and supplies.,” he said in a tweet.

“This will impact everyone,” he added.
#Afghanistan
Add Comment