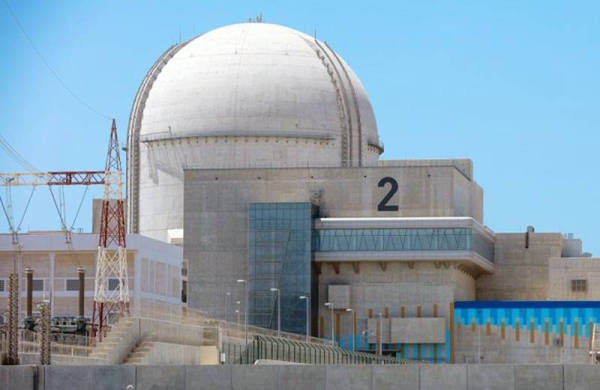 The Emirates Nuclear Energy Corporation (ENEC) on Friday announced that its operating and maintenance subsidiary, Nawah Energy Company (Nawah) has successfully started up Unit 2 of the Barakah Nuclear Energy Plant, located in the Al Dhafra Region of Abu Dhabi Emirate, United Arab Emirates (UAE).
ENEC and Nawah are continuing to define the UAE’s success story with this milestone, which has been achieved within 12 months of the start-up of Unit 1, and within four months of commercial operations of Unit 1.

This highlights the significant progress being made in bringing the four units of the Barakah Plant online, in a safe and timely manner, to quickly decarbonize the UAE’s energy sector.

“Operations started at Unit 2 at the Barakah nuclear energy plant,” said Sheikh Hamdan bin Zayed, the Ruler’s representative in the western region of Abu Dhabi. “This is a new achievement in the energy sector that reflects UAE’s ability to develop strategic mega projects and its commitment to sustainability and economic growth.”

The Barakah nuclear power plant in the Abu Dhabi emirate is the first nuclear power station in the Arab world and part of the oil producing state's efforts to diversify its energy mix. The first unit of the plant started commercial operations in April. Unit 2 was issued an operating license in March this year.

When completed Barakah, which is being built by Korea Electric Power Corp (KEPCO), will have four reactors with 5,600 megawatts (MW) of total capacity — equivalent to around 25 percent of the UAE’s peak demand.

Mohamed Ibrahim Al Hammadi, chief executive officer of ENEC, said: “We have reached another major milestone in the delivery of the UAE Peaceful Nuclear Energy Program today, as part of our journey to power the UAE with clean, abundant 24/7 electricity.

“With the support and guidance of the wise leadership of the UAE, Barakah has become a case study for the successful delivery of new nuclear programs, establishing the plant as an example for other nations considering the addition of nuclear energy as part of their energy portfolio.

“Seven out of ten of the world’s most sustainable nations use nuclear energy, which is not only clean, but enhances national energy security and reliability.”

Commenting on this achievement for the UAE, Eng. Ali Al Hammadi, chief executive officer of Nawah, said: “It is another momentous occasion for the Barakah Plant, and we congratulate our talented team for completing the safe and successful start-up of Unit 2.

“Preparations will now continue as we work safely and steadily towards grid connection and eventually the start of commercial operations for the second Unit of the Barakah Plant.

“We remain committed to ensuring nuclear operational excellence across all of units, and we thank our partners in the UAE and across the globe for their continuous support in helping us achieve these milestones to the highest operating standards.”

Start-up is the first time the unit has produced heat through nuclear fission. The heat is used to create steam, turning a turbine to generate electricity. With the experience of Unit 1 start-up, Nawah’s qualified and licensed team of nuclear operators conducted numerous safety tests on the process and power output of the reactor.

By powering hundreds of thousands of businesses and households with abundant, clean electricity from the Barakah Plant, ENEC is leading the largest decarbonization effort in the region. The plant is also the largest single source of electricity in the UAE through the commercially operating Unit 1 of Barakah.

When fully operational, the four units of the plant will produce 5.6 gigawatts of electricity while preventing the release of more than 21 million tons of carbon emissions every year, equivalent to removing 3.2 million cars off the roads annually, and equivalent to those emissions from charging 7.3 billion smartphones daily.
Add Comment