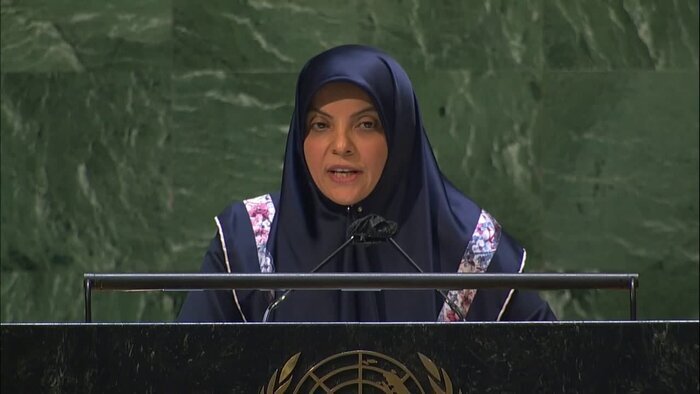 Zahra Ershadi, Iran’s deputy ambassador to the United Nations, on Friday described human rights resolution against Iran at the UN as “unconstructive”.

The reaction by Ershadi followed one day after the UN General Assembly passed the resolution with 78 votes in favor, 31 against and 69 abstentions.

The U.S., Britain, France, Germany, Canada, the Zionist regime, Saudi Arabia and Bahrain were some of the supporters of the resolution.

The vote for the resolution by Israel, Saudi Arabia and Bahrain is laughable.

Ershadi said those who approved such a resolution are the main supporters of “racism and occupation”, so it is better for them to not sermon others on the issue of human rights.

Noting that 100 countries did not vote for the resolution, she said, “It seems that time has come for representatives of those states to protest against the so-called human right advocates who have termed themselves as heroes in order to deprive independent countries of freedom through pressure, deceit, and false information.”

“Just a look at names of supporters of anti-Iran resolution, which are U.S., Canada, Zionist regime of Israel, and certain Western states, reveals that those who are racists and occupiers and commit brutal crime against indigenous people have come together to preach others on human rights,” IRNA quoted her as saying.

The West may keep silent on Canada's horrific crimes, but history will never forget that thousands of indigenous children have been under sexual harm then killed and their bodies have been found after in a country which is so-called land of freedom, she underlined.

She then stressed that supporters of such a resolution are keen to use the issue of human right as a tool and take advantage of it.
As she underlined that Iran from the outset of formation of such a resolution has explicitly denounced it like what the country did to the previous resolutions.

Speaking to reporters on Friday, Kazem Gharibabadi said the resolution, which had been drafted by “one of the biggest human rights violators,” was “filled with claims that usually have no basis and are far from the realities on the ground.”

The resolution accuses Iran of widespread violations of its people’s basic rights and urges the Tehran government to improve the situation of human rights in the country.

Gharibabadi said, “This has no basis and is totally far from the reality. Unfortunately, human rights are currently being politicized and used as a means to achieve foreign policy goals of countries.”

He said Iran would not be “influenced by the political measures and mechanisms adopted by other countries; however, we will continue to call out the self-proclaimed human rights advocates for their dual standards and politically-motivated approaches, reminding them of [the fact that] human rights is not a political issue for them to use it for dual purposes or as an instrument against some other countries but keep silence in the case of other countries or violations of their own people’s rights,” Press TV reported.

The Iranian official also pointed to the many cases of human rights violations by Western countries in various fields, particularly refugees and migrants.

Gharibabadi singled out Canada and highlighted some cases of human rights violations there.

“Needless to say that Canada extensively violates not only the rights of its citizens but also those of other peoples. For example, there are more than 400,000 Iranians living in Canada who have been barred so far from consular services due to the severance of political ties [between Tehran and Ottawa],” he said.