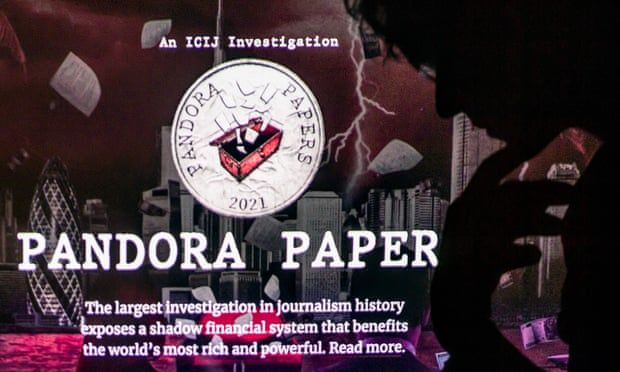 US proposes crackdown on financial ‘enablers’ in wake of Pandora papers

The bipartisan bill was proposed in the wake of the Pandora papers, a leak of 11.9m files from 14 different offshore services providers around the world that revealed how the global elite use tax havens to legally avoid paying billions in taxes, and how they are increasingly taking advantage of the US’s liberal trust laws.

The Pandora papers show how a handful of US states, led by South Dakota, are now providing growing competition for more traditional tax havens such as the Bahamas, the Cayman Islands and Switzerland.

An analysis of the leak by the International Consortium of Investigative Journalists (ICIJ) and the Washington Post showed that nearly 30 trusts had been established in South Dakota holding assets connected to people or companies accused of corruption, human rights abuses or other wrongdoing.

Following a series of deregulations, South Dakota’s trusts enjoy some of the world’s most powerful legal protections from taxes, creditors and other claimants in the world, and hold $367bn (£273bn) in assets, up from $75.5bn (£55.36bn) in 2011.

The proposed legislation, the Establishing New Authorities for Business Laundering and Enabling Risks to Security (Enablers) Act, would require the treasury department to create new due-diligence rules for American middlemen who facilitate the flow of foreign assets into the United States.

The act would update the 51-year-old Bank Secrecy Act, which requires banks to investigate their clients and the source of their wealth but had excluded trust companies, accountants, lawyers and other professionals.

In an unusual sign of bipartisanship, the legislation is backed by Democratic congressmen Tom Malinowski of New Jersey and Steve Cohen of Tennessee, as well as Republican members of Congress Maria Elvira Salazar of Florida and Joe Wilson of South Carolina.

“If we make banks report dirty money but allow law, real estate, and accounting firms to look the other way, that creates a loophole that crooks and kleptocrats can sail a yacht through,” Malinowski said in a statement. “Our bill closes that loophole and encourages the administration to move in the same direction.”

“American adversaries ranging from China to Iran to Russia have taken advantage of the US enablers of kleptocracy – unscrupulous lawyers, accountants, and others, to push their dirty money into our system, attempting to undermine our republic from within,” said Wilson.

“If we are serious about fighting dictatorship, we need US professionals to do the most basic due diligence,” he said.

The US move is the latest in a series of crackdowns in the wake of the Pandora papers revelations. Authorities in at least eight countries have announced investigations following the publication of the stories.

On Friday, members of the European parliament voted to tighten rules that allow the super-rich to move their wealth off shore.
Add Comment