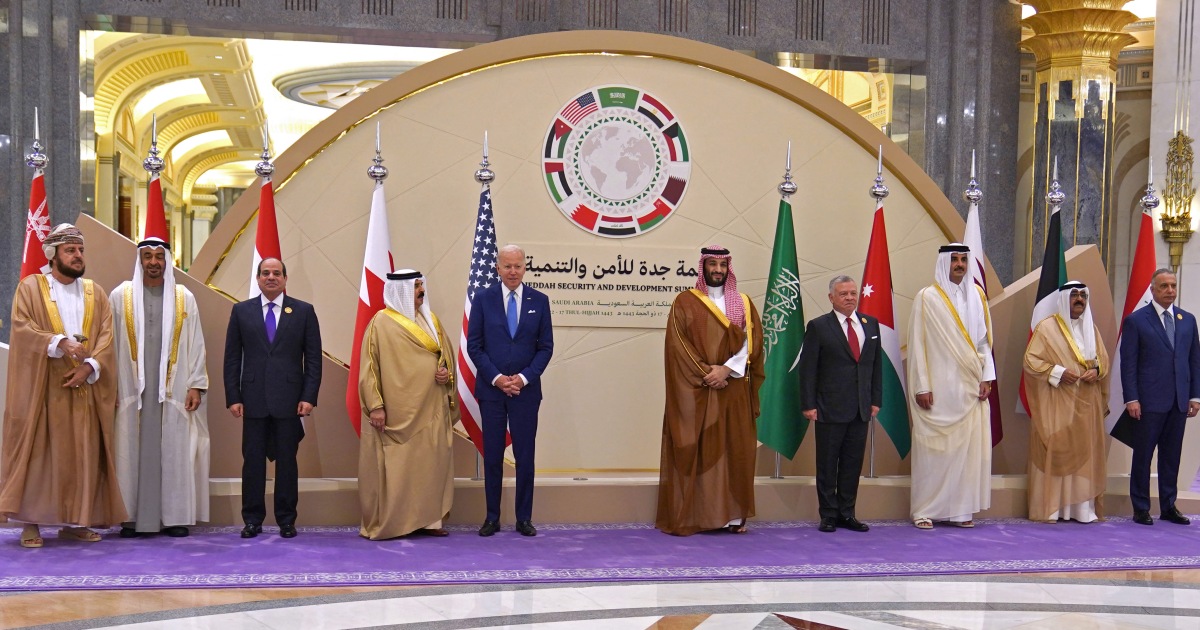 US ‘will not walk away’ from Middle East: Biden at Saudi summit

President Joe Biden says the US will remain an active and engaged partner in the Middle East, focusing on regional ties.

The United States “will not walk away” from the Middle East and leave a vacuum to be filled by Russia, China or Iran, US President Joe Biden has told a summit in Saudi Arabia’s Red Sea city of Jeddah.

He also told the summit on Saturday that the US is committed to ensuring Iran never gets a nuclear weapon.

Leaders of six countries of the Gulf Cooperation Council (GCC) – Saudi Arabia, Qatar, Bahrain, Kuwait, Oman and the United Arab Emirates – plus Jordan, Egypt, and Iraq are holding talks on regional security and bilateral relations with the US at the summit.

Biden was using the summit to lay out his strategy for the Middle East as he closed the final leg of a four-day trip meant to bolster ties in the region.

“We will not walk away and leave a vacuum to be filled by China, Russia or Iran,” Biden said. “We will seek to build on this moment with active, principled, American leadership.”

Although US forces continue to target armed groups in the region and remain deployed at bases throughout the Middle East, Biden suggested that he was turning the page after Washington’s invasions of Iraq and Afghanistan.

“Today, I am proud to be able to say that the eras of land wars in the region, wars that involved huge numbers of American forces, is not under way,” he said. 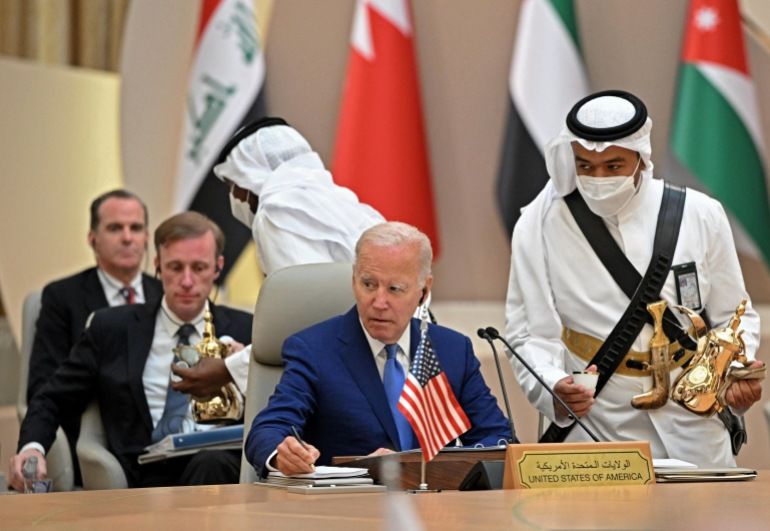 Biden also pressed his counterparts, many of whom lead repressive governments, to ensure human rights, including women’s rights, and allow their citizens to speak openly.

“The future will be won by the countries that unleash the full potential of their populations,” he said, including allowing people to “question and criticise leaders without fear of reprisal.”

The US president spent Saturday morning meeting individually with the leaders of Iraq, Egypt and the UAE.

After a fist bump with Crown Prince Mohammed, Biden said he raised the Khashoggi case and warned against future attacks on dissidents.

Crown Prince Mohammed, who chaired the opening of Saturday’s summit, has denied any role in the death of Khashoggi, who was dismembered in the kingdom’s Istanbul consulate and whose remains have never been found.

Saudi Arabia’s crown prince on Saturday said his country would increase its oil production to 13 million barrels maximum a day.

But Crown Prince Mohammed stressed that his country would be unable to increase output any further to meet the increased demand for oil amid the global energy crisis.

He made the comment as he opened the GCC summit. The crown prince also called on Iran to “cooperate with the nations of our region” and to not “interfere with the internal affairs” of other nations.

He also urged Tehran to cooperate with the International Atomic Energy Agency.

Al Jazeera’s White House correspondent Kimberly Halkett said that Biden believes there are other goals of value that will take time to reap the benefits.

“The alliance with Israel is strong, [so] I think what’s new is what’s happening with Saudi Arabia,” he said.

“It’s important to once again underline the things the US president mentioned: America is going to continue with diplomacy. It is also going to do so with deterrence, [preventing] Iran from getting nuclear weapons. And de-escalation. He once again commended the idea that there is a ceasefire in Yemen,” Bishara added.

At the summit, Qatar’s Emir Sheikh Tamim bin Hamad Al Thani said achieving stability in the Gulf region is essential not only to it but to the international community.

“We reaffirm our position to spare the Gulf and the Middle East the danger of a nuclear armament while recognising the right of the countries in the region to use nuclear energy for peaceful purposes in accordance with international law,” Sheikh Tamim said.

The emir also said regional instability will continue as long as Israel maintains its occupation of the Palestinian people.

“One of the most important sources of instability will linger unless Israel stops its violation of international law reflected in the building of settlements and changing Jerusalem’s character and continuing to impose siege on Gaza,” he said.

“It is inappropriate for Arabs to keep making proposals while Israel’s role is confined to rejecting them and increasing its intransigence.”

Relations between Egypt and the United States were uneasy in the first months of the Biden presidency amid differences on human rights, before Egypt’s efforts to broker a ceasefire in Gaza in May 2021 prompted re-engagement.

A senior US official told the Reuters news agency that Biden would announce that the US has committed $1bn in new near- and long-term food security assistance for the Middle East and North Africa, and that Gulf states would commit $3bn over the next two years in projects that align with US partnerships in global infrastructure and investment.

Gulf states, which have refused to side with the West against Russia over Ukraine, are seeking a concrete commitment from the US to strategic ties that have been strained over perceived US disengagement from the region.