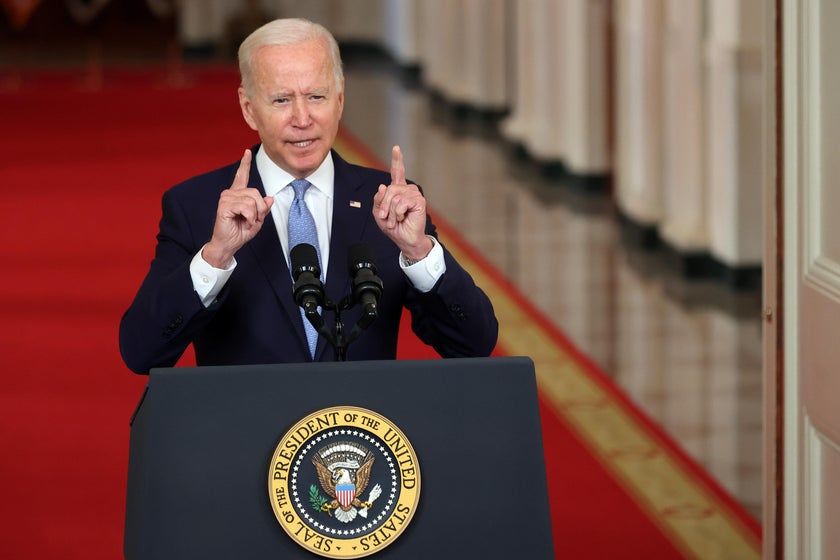 He made several missteps, but on the big picture, he was right.
There was a moment in Tuesday’s Senate hearing on the withdrawal from Afghanistan when it became clear why President Joe Biden decided to get the troops out of there as quickly as possible.

It came when Gen. Mark Milley, chairman of the Joint Chiefs of Staff, explained why he and the other chiefs—the top officers of the Army, Air Force, Navy, and Marines—all agreed that we needed to pull out by Aug. 31. The Doha agreement, which President Donald Trump had signed with the Taliban in early 2020 (with no participation by the Afghan government), required a total withdrawal of foreign forces. If U.S. troops had stayed beyond August, Milley said, the Taliban would have resumed the fighting, and, in order to stave off the attacks, “we would have needed 30,000 troops” and would have suffered “many casualties.”

And yet, as Milley also testified on Tuesday, he, the chiefs, Secretary of Defense Lloyd Austin, and other military officers advised Biden to keep 2,500 U.S. troops in Afghanistan beyond the Aug. 31 deadline. The difference is that those troops wouldn’t be attached to any “military mission.” Instead, they would “transition” to a “diplomatic mission.”

However, it is extremely unlikely that the Taliban would have observed the semantic distinction. In their eyes, 2,500 U.S. troops would be seen as 2,500 U.S. troops, regardless of whether their mission was officially said to be “military” or “diplomatic.” Therefore, the Taliban would resume fighting, as Milley said they would, and Biden would then have been faced with a horrendous choice—to pull out while under attack or send in another 30,000 troops.

Some historical-psychological perspective is worth noting. In the first nine months of Barack Obama’s presidency, the generals were pushing for a major escalation of the war in Afghanistan—an increase of 40,000 troops—and a shift to a counterinsurgency (aka “nation-building”) strategy. Biden, who was then vice president, was alone in suggesting an increase of just 10,000 troops, to be used solely for training the Afghan army and for fighting terrorists along the Afghan-Pakistani border. As Obama recalls in his memoir, Biden urged the new and relatively inexperienced president not to be “boxed in” by the generals. Give them 40,000 troops now, and in 18 months, they’ll say they need another 40,000 to win the war. As Obama later acknowledged, Biden was right.

And so, as Milley was advising Biden to keep 2,500 troops in Afghanistan, even while acknowledging that another 30,000 might be needed if the Taliban resumed fighting, it’s easy to imagine Biden thinking, “They’re trying to box me in, just like they did before, just like they’ve always done since the Vietnam War,” which was raging when Biden first entered the Senate in 1973 and has shaped his views on war and peace ever since.

Milley and Gen. Kenneth McKenzie, the head of Central Command, both acknowledged at the hearing that the U.S. military was flying blind through much of its 20-year war in Afghanistan, the longest war in American history. The officers of the day tried to mold the Afghan army in their own image, making them too dependent on U.S. technology and support, so that once we withdrew, collapse was inevitable. Milley also noted that he and the other officers paid too little attention to Afghan culture and to the corrosive effects of the Afghan government’s corruption and lack of popular legitimacy. So, Biden might well have been thinking, why should he pay attention to anything these guys had to say on the war in Afghanistan, which they’ve been wrong about from the very beginning?

Biden made several missteps, some of them disastrous, in the pace and sequence of the withdrawal. Most of all, he should have pulled out all the spies, contractors, U.S. citizens, and Afghan helpers before pulling out all the troops. But on the big picture, he was right, and the generals, as they now grudgingly admit, were wrong.
#donald trump  #afghanistan  #joe biden

Oh ya 16 days ago
Slow joe is the boss. The failure falls on him. He left the military airbase before he got the people out. He needs to step down in his failure as the leader of the military and America. And then he leaves 85 billion dollars of the best equipment in the world to the enemy. America has a retarded trader running the country
View all comments (1)Add comment