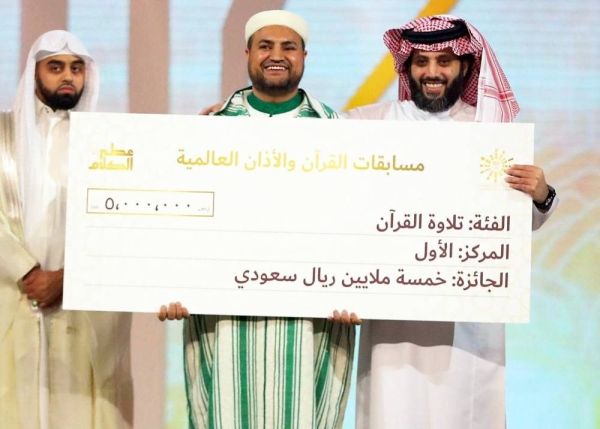 The Chairman of the Board of Directors of the General Entertainment Authority (GEA) Turki Al-Sheikh honored the winners of the International competition of the Holy Qur'an and Call to Prayer Otr Elkalam (Scent of Speech) and presented them with the valuable prizes allocated to the most beautiful voices in the Holy Qur’an recitation and the call to prayer. The total value of the prizes is SR12 million ($3.2 million).
This came in the final episode of Otr Elkalam TV show, in which Al-Sheikh thanked the Custodian of the Two Holy Mosques King Salman and Crown Prince Muhammad Bin Salman for their unlimited support of everything that is beneficial to the Kingdom, including the entertainment sector.

In the last episode of Otr Elkalam, which was distinguished by the ethnic diversity of the contestants, Moroccan contestant Younes Mustafa Gharbi won the first place in the Holy Qur’an recitation category, with a financial prize of SR5 million ($1,333,3000).

During the award ceremony, Al-Sheikh announced the continuation of the competition next year, with different numbers of contestants from different countries around the world. The current competition too had diverse attendance by talented participants in reciting the Holy Qur’an and delivering the call to prayer.

The Holy Qur’an recitation and Call to Prayer Competition, distinguished by its challenging criteria, is one of the international initiatives of the General Entertainment Authority. It allows the participation of Muslims from different countries of the world through simple steps, facilitating participation for those wishing to join the competition qualifiers from anywhere.

The competition qualifiers began in 2019. More than 40,000 contestants from 80 countries around the world participated before reaching the final qualifiers, in which 36 contestants competed in the Holy Qur’an recitation and call to prayer categories through Otr Elkalam TV show.

This is one of the most important competitions launched by the GEA during Ramadan, with its content that suits the spirituality of the month, as well as its standards and provisions that enhance competitiveness. This is visible through stages and classifications through which qualifying procedures are carried out to ensure that the best-qualified talents reach the final stages.

These knowledgeable and eminent members of the jury enrich viewers with knowledge by evaluating the contestants and offering observations and notes about their performance to benefit viewers and educate them about the sciences of the Holy Qur’an and ways of reciting it.

The competition began broadcast on TV on the first day of Ramadan at 5 p.m. on the Saudi channel and Shahid platform. It is one of the most prominent Ramadan religious TV shows, which attracted the most attention and was one of the most viewed shows.

The exciting competition received the support of reciters and muezzins from all over the world, as it is one of the most challenging and largest competitions in the world, especially because it hosts a group of the most famous judges of international Qur’anic competitions.
Add Comment