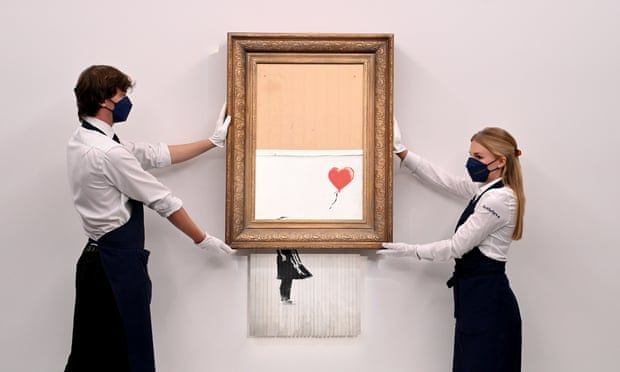 Love is in the Bin, remains of artist’s live destruction of Girl with Balloon, sells for many times its guide price
A partially shredded Banksy painting has sold for more than £18.5m at auction, a record for the street artist.

The artwork was the remains of the anonymous artist’s live destruction of his piece Girl with Balloon at the same auction house in a piece of performance art, which sold for £1m to an unnamed European woman in 2018.

Moments after the hammer fell at that auction, alarms sounded and the canvas dropped through a hidden shredder built into the bottom of the large Victorian-style frame.

The stunt left the bottom half in tatters and only a solitary red balloon left on a white background in the frame.

Alex Branczik, chairman of modern and contemporary art at Sotheby’s Asia, said: “It is almost three years to the day since one of the most ingenious moments of performance art this century made auction history. Banksy is no stranger to making headlines and this latest chapter in his story has captured imaginations across the world – we can only begin to guess what might come next.”

Girl with Balloon, which depicts a small child reaching up towards a heart-shaped red balloon, was originally stencilled on a wall in east London and has been endlessly reproduced, becoming one of Banksy’s best-known images.

The piece had been on permanent loan to the Staatsgalerie Stuttgart Museum in Germany since March 2019.

Banksy rose to prominence through a series of graffiti pieces that appeared on buildings across Britain, marked by their satirical themes.

Other recent works by the subversive artist included the opening of Dismaland, his dystopian, Disneyland-esque theme park in 2015, which he described as a “family theme park unsuitable for children”.

The Guardian reported last month that a collector bought a fake Banksy non-fungible token (NFT) for £244,000. The piece, called Great Redistribution of the Climate Change Disaster, was bought by the buyer named Pranksy only to have the currency returned after what appeared to be an elaborate hoax.
Add Comment