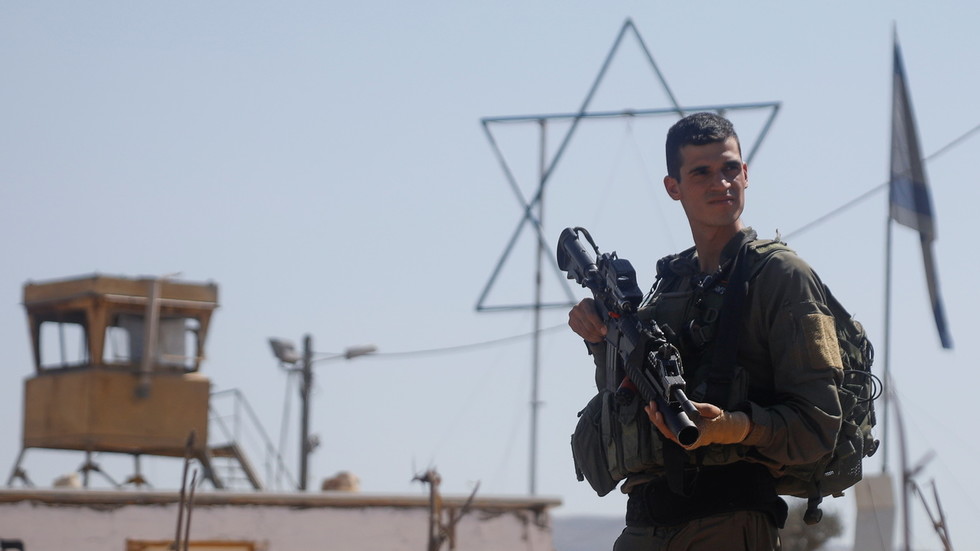 Video footage of two alleged Israeli spies being held by an armed Palestinian group have thrown fuel on an already incendiary situation.
While indirect talks over a prisoner exchange between Hamas and Israel continue without any concrete progress, Gaza’s armed groups threaten retaliation to any deaths which may occur amongst Palestinian political prisoners inside Israeli jails. This already volatile and tense scenario has been further complicated with the release of a video of two alleged Mossad agents.

Late Friday night,an investigative program aired by Al-Jazeera’s Arabic channel broadcast footage claimed to have been filmed and leaked to them by a little known group called ‘Hurriyeh’ (Freedom). The documentary, which focuses on abuses carried out against Palestinian prisoners in Israel’s military prisons, claims the two were Israeli agents who were “executing secret security missions outside Israel.”

The men were shown shackled in detention with armed guards. Israel waited until Saturday night to deny that any of its citizens had been captured. This has now led to much speculation over whether the videos of the two is a deception to seek to pressurise Israel, or that Tel Aviv is simply lying.

The first notice of the existence of the movement and their prisoners was back in September of 2020, when a page on Facebook calling itself ‘Freedom Movement’, claimed to have captured two Israeli Mossad agents and threatened to reveal more information. Israel never confirmed nor denied those allegations at the time, and as only poor quality photos and no documentation were made available to support the group’s claims, the story was largely ignored.

However, the new documentary has now revealed not just the footage, but the names and a passport of one of the Israelis said to have been captured. The two were identified as David Ben-Rosey, described as a petrochemical expert, and David Perry, said to be an intelligence officer and part of an Israeli settler organisation. The ‘Freedom’ group claims that they were both working for Mossad. According to the program, the fate of the two depends upon the securing of a successful prisoner exchange deal.

If Tel Aviv is telling the truth and these men are not Israelis or working for Mossad, then this may indicate that a psyops campaign has been carried out against them. Alternatively, if it does turn out that the claims are correct, then this would be an embarrassment for the Israelis and would amount to them having undergone a massive cover-up in order to not weaken their bargaining chips in the exchange negotiations.

In late October, UN Human Rights Council expertsurged Israel to release five Palestinian hunger strikers due to fears that their health could rapidly deteriorate at any moment; the Israeli authorities have continued to ignore these concerns. Hamas, as well as several other Palestinian political parties, have sworn that if any prisoner dies in Israel’s custody, their armed wings will retaliate. There are also now six Palestinian prisoners on hunger strike, making the risk of a violent escalation in the occupied territories much higher, if one or more prisoners die.

The six prisoners refusing food are; Kayed al-Fasfous, who has been on strike for 117 days, Miqdad Al-Qawasmeh (109 days), Alaa Al-Araj (91 days) Hisham Abu Hawash (82 days), Ayyad Al-Herimi (46 days), and Louay Al-Ashqar (29 days). According to the mother of Miqdad Qawasmi, who spoke with Arab48 news, her son “has constant pain in the abdomen, his joints, and bones, and cannot see, in addition to arrhythmia, migraine and many other conditions,” adding that she fears he may die at any moment. Kayed al-Fasfous, the longest hunger striker, also risks “clinical death” in the coming days, his family warns.

All of the hunger strikers are currently held in what Israel calls ‘administrative detention’, meaning that they are being held without charge and that the jailing is done on the basis of so-called secretive security information. This practice is “fundamentally a violation of the Geneva conventions,” Samidoun’s international coordinator, Charlotte Kates, told me when I asked her to comment on the legality of the detention of the six political prisoners. Samidoun is a political prisoners’ advocacy group which has been working on international mobilisation in support of the hunger strikers.

“Israel will claim that an occupier has the right to detain people under the law, but the reality is that they use administrative detention on a systematic and constant basis,” Kates said. “It should be noted that these so-called allegations are illegitimate, because the entire system is based on the criminalisation of legitimate Palestinian resistance, but in these cases, even within the military court system, which convicts over 99% of Palestinians, Israel doesn’t think it can make a case, which just shows its blatant disregard for fair trial standards. Administrative detention is a violation of international law.”

In mid-October, the Palestinian Islamic Jihad (PIJ) party, a political and armed group based in Gaza,organised a mass hunger strike which included around 400 prisoners belonging to the group. Israel quickly struck a deal to end this strike, which threatened to draw in other groups to organise their members to do the same.

Despite Israel having de-escalated tensions through this deal, which secured more basic rights for Palestinian prisoners, the situation is at the boiling point again. PIJ and Hamas, Gaza’s ruling party, have both threatened retaliation in the event that any hunger striker dies in custody. If one occurs, a sudden armed escalation between Israel and Gaza could easily be the result, plunging the two sides into a similar bloody confrontation as was seen in May.
#facebook
Add Comment