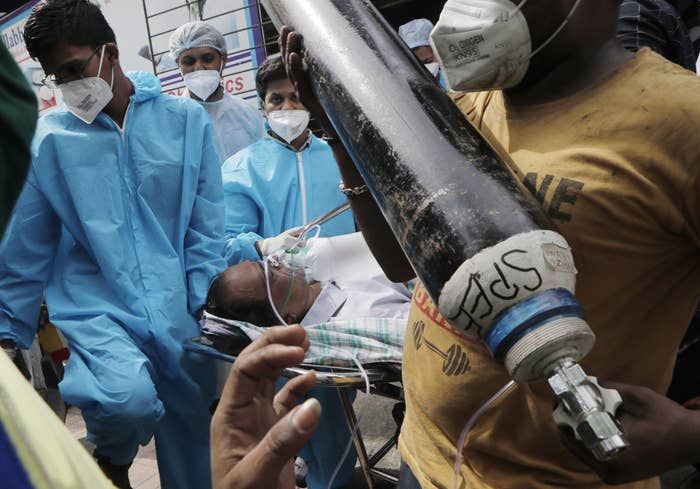 COVID Is Ravaging India Harder Than Ever, And The Situation Is Only Getting Worse

About 1 in every 3 cases of COVID-19 recorded each day in the world is now in India, where the rate of new infections is growing faster than in any other nation.

A second wave of COVID-19 infections in India has completely overwhelmed the nation’s medical infrastructure as families make desperate pleas for oxygen and other life-saving supplies on social media.

In the capital city of New Delhi, morgues are using mass cremations to dispose of the bodies of COVID victims. At some hospitals, patients are waiting outside in ambulances due to a lack of ventilators inside.

Volunteers have also been stepping up to help with the supply issues, including India Cares, a community of more than 3,000 people using social media to source everything from blood donors to oxygen and medicine.

Mohd Saqib, a 23-year-old student who recently got involved with the organization, told BuzzFeed News that appeals for help are increasing each day.

“We are losing daily from our Indian family,” Saqib said. “When a person [makes a] request and then after some time we know that the same person is no more, this moment is the worst.”

In an emergency meeting chaired by Indian Prime Minister Narendra Modi, officials agreed to divert oxygen intended for industrial purposes to meet immediate medical needs and to use the country’s transport networks to more quickly get the supplies to states that need it most.

Modi also called on states to take stronger action on the potential hoarding of supplies. 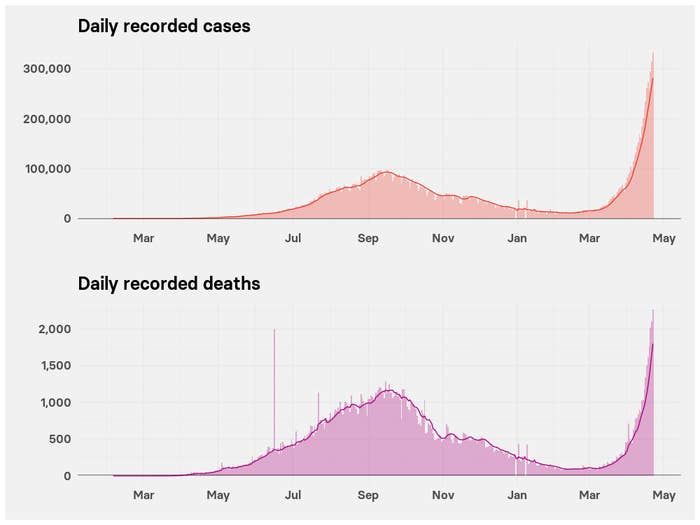 India escaped the worst of COVID-19 during the first year of the pandemic. Although the nation ranks fourth in the world for its official global death toll, behind the US, Brazil, and Mexico, its death rate was low relative to its population of nearly 1.4 billion. And as India entered 2021, it seemed to have the disease under control, as cases and deaths had fallen from a peak in September.

But since March, the nation has seen an explosion of infections, suspected to be driven by a new variant of the coronavirus called B.1.617. India’s National Institute of Virology reported that this variant has taken a lead in transmissions, appearing in about 61% of tested cases in one province last week. It's sometimes called the “double mutant” variant because it contains two mutations associated with increased contagion; its role in India’s outbreak remains unclear due to limited medical testing for variants there. 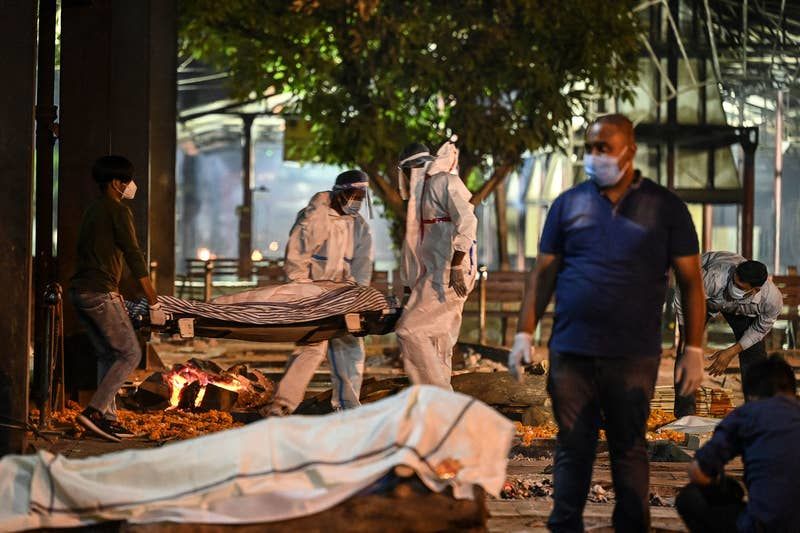 Relatives and staffers carry the body of a COVID-19 victim at Nigambodh Ghat crematorium in New Delhi on April 22, 2021.

Now about 1 in 3 three cases of COVID-19 recorded each day worldwide is in India, and the rate of new infections is growing faster than it is in any other nation. About 2,000 COVID-related deaths are also being recorded there each day, roughly a sixth of the global total. But an analysis by the Financial Times based on records from cremations suggests that many people who are dying of COVID-19 in India are not being counted in official statistics.

With its healthcare system teetering on the brink of collapse, Giridhar R. Babu, an epidemiologist from the Public Health Foundation of India (PHFI), warned that this “will not be the last wave and not the last pandemic either.”

In an interview with local media, Babu said the current situation in India should be a global concern.

“If disease control is neglected in some parts of the world, every other part is at risk of importing the infections,” Babu said. “We need to strictly and meticulously review the COVID situation in the country while expanding vaccine coverage.

“Strong public health leadership and resources should be available to build resident systems, including strengthening epidemiological and genomic surveillance for COVID-19 to detect outbreaks. It is unrealistic to expect tangible gains without a strong focus on health system strengthening, especially not strengthening human resources recruitment and capacity building.” 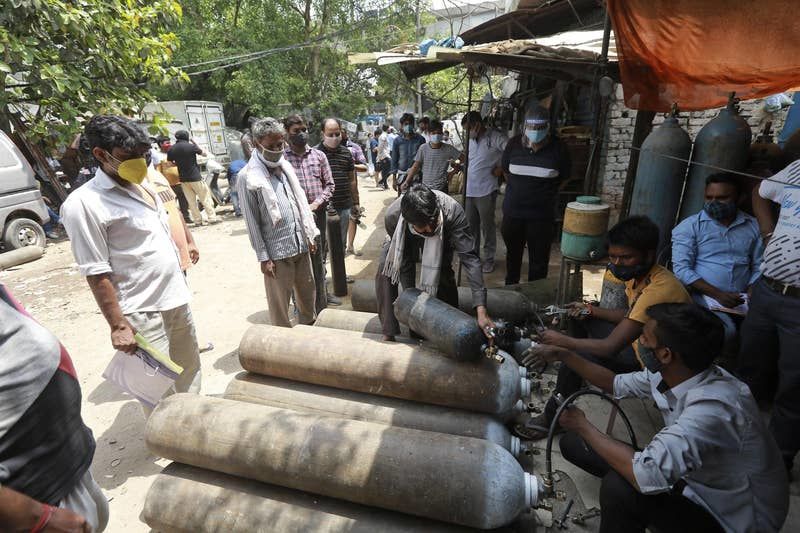 People stand in line to refill oxygen tanks in New Delhi on April 23, 2021.
The situation in India has been blamed partially on the government, with critics, including the PHFI president, accusing Modi’s administration of prematurely declaring a win against the virus when efforts should have been poured into strengthening the nation’s medical infrastructure.

Instead, India’s election authorities announced key elections in five states, the country’s cricket board gave the green light for an international game with a stadium full of spectators, and the Hindu festival of Kumbh Mela brought millions to Haridwar for the holy occasion.

India’s escalating COVID-19 crisis is also very bad news for the global effort to vaccinate people against the coronavirus. The Serum Institute of India in Pune is the world’s largest vaccine manufacturer and was tasked with making an initial 200 million doses of a version of the Oxford/AstraZeneca vaccine for COVAX, a collaboration between the WHO, the Coalition for Epidemic Preparedness Innovations, and Gavi, the Vaccine Alliance, which aims to bring affordable vaccines to the world’s developing nations.

But India’s domestic vaccine rollout has struggled, with just 1.4% of the population currently fully vaccinated against COVID-19. In late March, India paused vaccine exports to divert supplies of the AstraZeneca vaccine to its own vaccination drive. 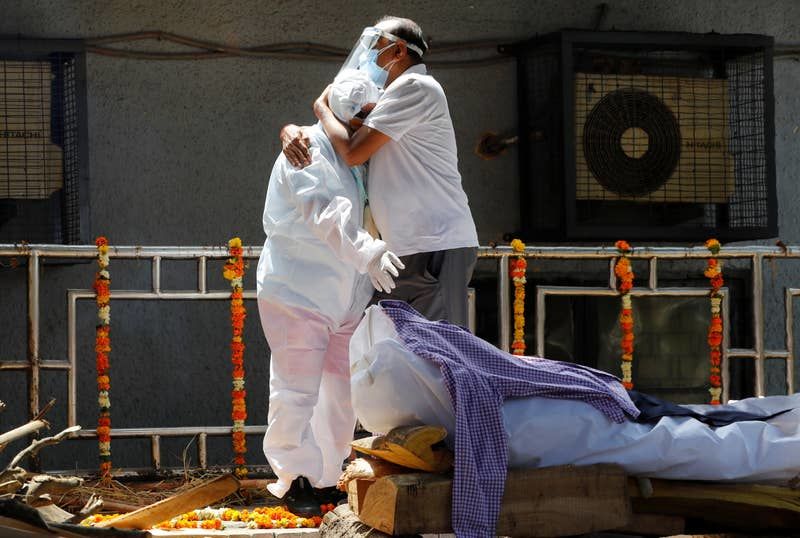 People mourn a relative who died of COVID-19 next to his funeral pyre at a crematorium in New Delhi on April 21.

The Serum Institute of India has also signed a deal to produce around a billion doses of a coronavirus vaccine developed by the US company Novavax once it wins approval. So further pressure to use the nation’s vaccine-making capacity to boost its own faltering program will have knock-on effects across the world. India has also argued that US export controls on raw materials used to make the vaccines will hamper its ability to meet global demand.

The US is also under pressure to donate around 20 million doses of unused AstraZeneca vaccines that have yet to be authorized for use by the FDA. AstraZeneca said it would soon have 30 million US doses ready, although the US agreed to send 4 million doses to Canada and Mexico in March. Asked about donating those AstraZeneca stocks, White House COVID-19 response coordinator Jeff Zients said on Friday that the US “will explore options” for shipping excess vaccines overseas “as our confidence around our own supply increases.” He pointed to President Joe Biden’s $4 billion pledge to COVAX in February as an indication of the country’s support for global vaccination.

Meanwhile, the CDC is consulting with Indian health officials and offering technical assistance, said Anthony Fauci, the chief of the National Institute of Allergy and Infectious Diseases.

“It is a dire situation that we’re trying to help in any way we can,” he said. “Obviously, they need to get their people vaccinated.” 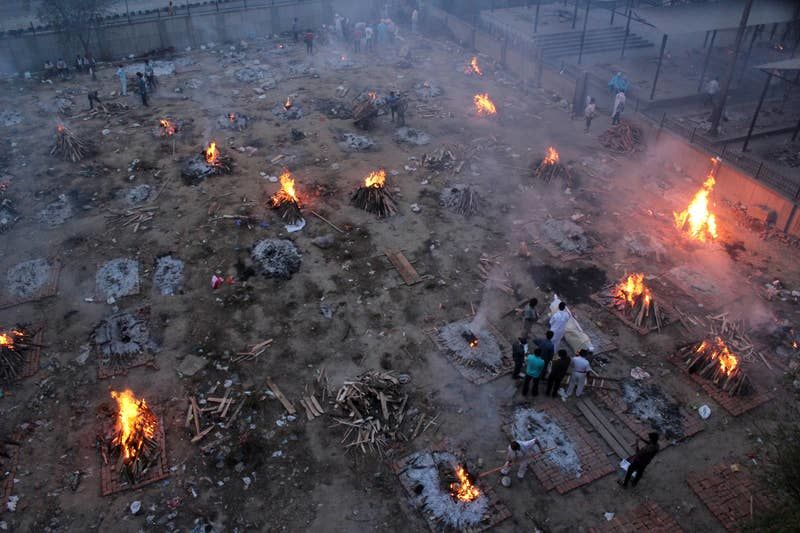