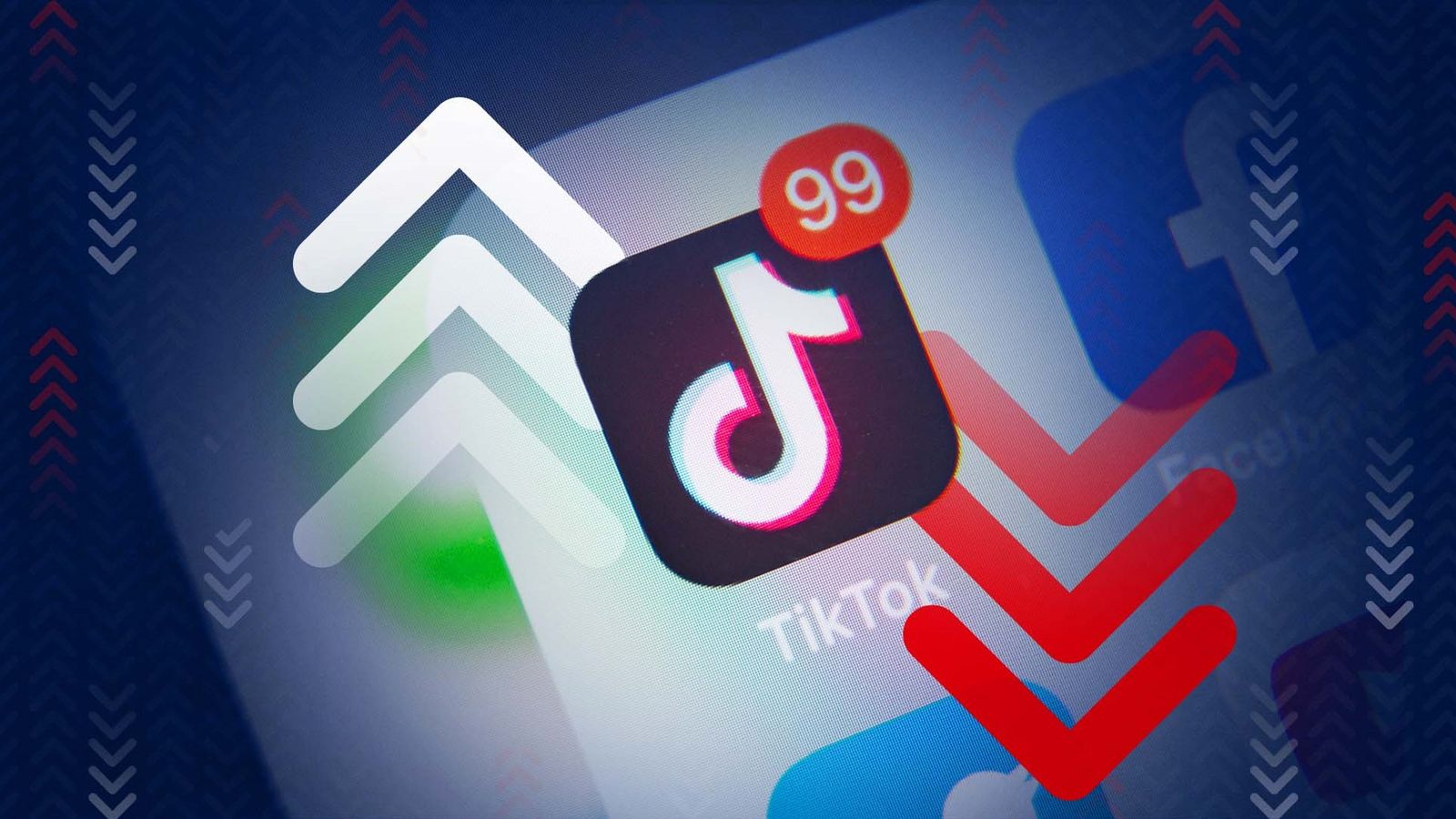 FinTok: How the cost of living crisis helped turn TikTok into a hub of financial advice

From breaking down the (former) mini-budget to navigating the murky realms of crypto, and even the best apps to invest with, Financial TikTok is populated by content creators offering their advice on how to survive the cost of living crisis.
Alongside the rising cost of living has come the rise of FinTok, an online world of personal finance guidance.

From breaking down the (former) mini-budget to navigating the murky realms of crypto, and even the best apps to invest with, Financial TikTok is populated by content creators offering their advice on how to survive the cost of living crisis.

It's not the first time people have turned to the platform for help, with budget recipes and energy-saving hacks (including showering at the gym) going viral in recent months.

But as the cost of living grows, this new side of the app grows with it.

Moving beyond the viral dances, cat videos and feta pasta recipes that made it so popular in the pandemic, research by Ofcom shows TikTok is one of the top three news sources for teenagers - up there alongside Instagram and YouTube.

From sweets at school to four figures a month 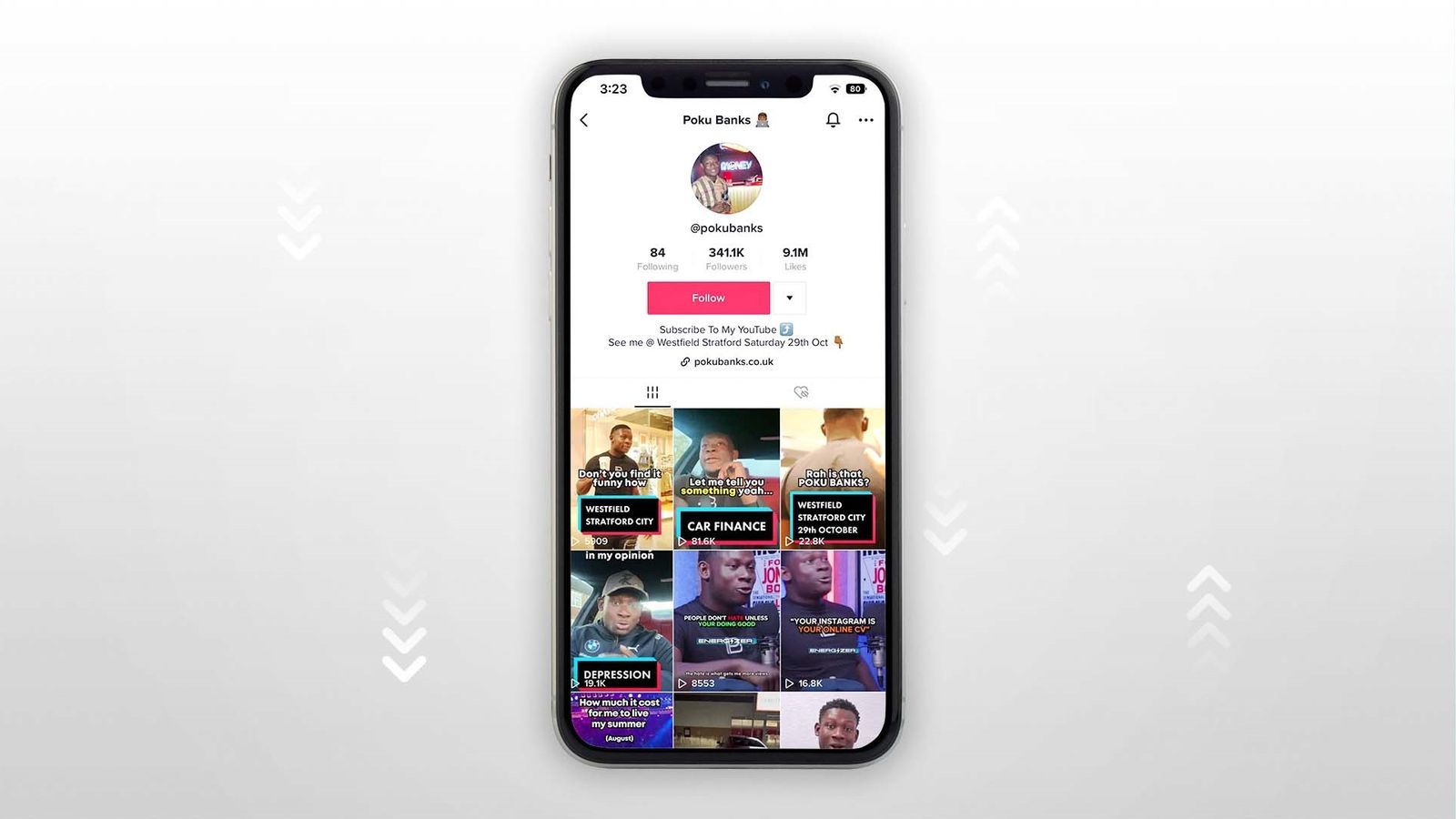 Poku Banks began as an entrepreneur selling sweets at school but turned his personal finance degree from the University of Nottingham into a source of income, sharing guidance with his 341,100 TikTok followers.

Now, he said, he can make up to four figures a month from the platform, sharing tips including; the best ways to fund a holiday using investments, advice on car finance or how to use freshers week as an entrepreneur.

With 41% of users between the age of 18 and 24, TikTok is particularly popular among Gen Z.

"Growing up Gen Z, we have short attention spans and that's life," he said explaining why he prefers condensing complex topics into short videos.
Research by One Poll for Westfield in October 2022 of 1,046 teenagers and 2,050 adults found 60% of people now choose social media as the best place to get financial advice amid the cost of living crisis.
Those aged 12-17 said they have sourced their best money-saving tips from TikTok and say they have valued this kind of advice much more than what they get from their parents or school.

As a result, over a third of the age group say they have put away between £100 and £500 in personal savings as a result of the tips.

A TikTok spokesperson said: "TikTok is a place where millions of people come to be entertained, but also to learn. As more people seek financial information online, it's important to us that we help our community access the right support and advice on TikTok, especially if they may struggle to access it elsewhere.

"We've long partnered with Citizen's Advice to produce informative videos and our #FactCheckYourFeed campaign. Most recently, we launched a new Cost of Living Hub - to bring together all the best tips from our community and help people make the right financial decisions for them." 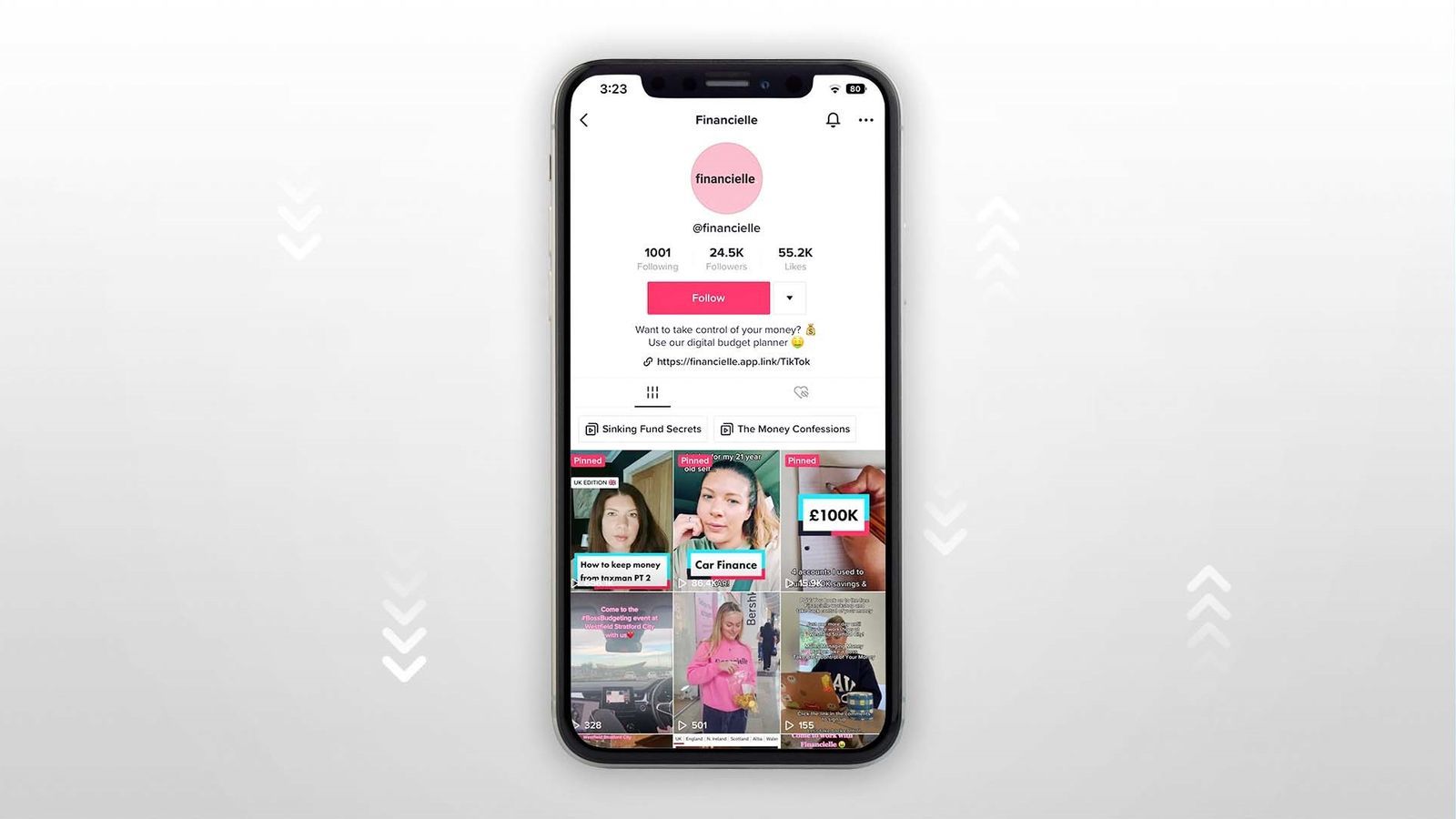 A brief search under the hashtag #stocktok shows videos of creators making "thousands in seconds" and promising "stocks that will make me rich in 2023".

Laura Pomfret, from Financielle, said: "If people in our community are asking us, should I invest in cryptocurrency, I would say, well it's completely up to you but let me tell you what cryptocurrency is, I'll tell you what some of the risks are so you can make your own decision."

But with anyone able to create an account and upload videos - and no real formula for what catches attention and goes viral - there are concerns about navigating the platform and how safe it could be to follow some of the guidance.

"I do worry. On my For You Page [TikTok's personalised homepage] yesterday was a 'wealth bro' from America saying you should finance a car and invest that money instead," said Laura.

"[He was] promising returns that aren't going to happen, and when I see stuff like that it makes me uneasy."

Searching for financial hashtags brings up a disclaimer from TikTok, reminding users that "all investments bring risks" and to never disclose personal information on the app.
It also gives tips on how to recognise if something is a scam, alongside a TikTok from Citizen's Advice.
"I like, all of us, don't give financial advice," Ellie Austin-Williams from This Girl Talks Money told Sky News.

"And for a lot of people, this is a real misconception. A lot of people are like, 'oh well I need a financial advisor on TikTok, to tell me what to do'.

"A financial advisor, no matter how qualified they are on TikTok cannot tell you what to do.

"They are not allowed to."

'I'm never going to sell you anything'

Like all social media platforms, Ellie said there is a "proliferation of scammers" out there who impersonate her account.

"It's particularly bad in finance," she said.

"It's just a case of having a bit of caution at the back of your mind that if something sounds too good to be true, then it is."

Poku added that all the advice is based on their personal experiences, and while they "may push you in a way, or a direction, that we believe is the best", both use disclaimers on their content, warning users to only invest what they can afford, or reminding them that no investment has guaranteed returns.

Less than 50 years ago, a woman couldn't open a bank account in her own name. Now, female entrepreneurs are using their TikTok platforms to try to close that gender gap.
Laura Pomfret, and sister Holly Holland, began Financielle in 2016 when Laura was on maternity leave.
From a northern working-class background, the former lawyer said she was "just rubbish with money as a graduate living in the city, spending everything I made" because she "never had any financial education".

"It's kind of concept of the female overload whether you're a mother or a daughter or whether you kind of you've been left out or these conversations, money feels overwhelming," the mother of three said.

TikTok, she said, appeals as a platform because you have to condense subjects down into short 60-second videos (although the app is now trialling longer content, shorter videos remain some of the most popular).
"We want things that are short and snappy, that can cut through the noise and tell it was like it is," she said.
Amid the confusion of the last few months - with a mini-budget announced then scrapped, two new prime ministers and multiple chancellors - Laura said: "There was a huge amount of economic terms being bandied around, with people saying 'I'm trying to make sure that I can pay my bills and I'm trying to work out what quantitative easing is or whether the interest rate thing is going to impact me or not'."

'Everything was aimed at my parents' 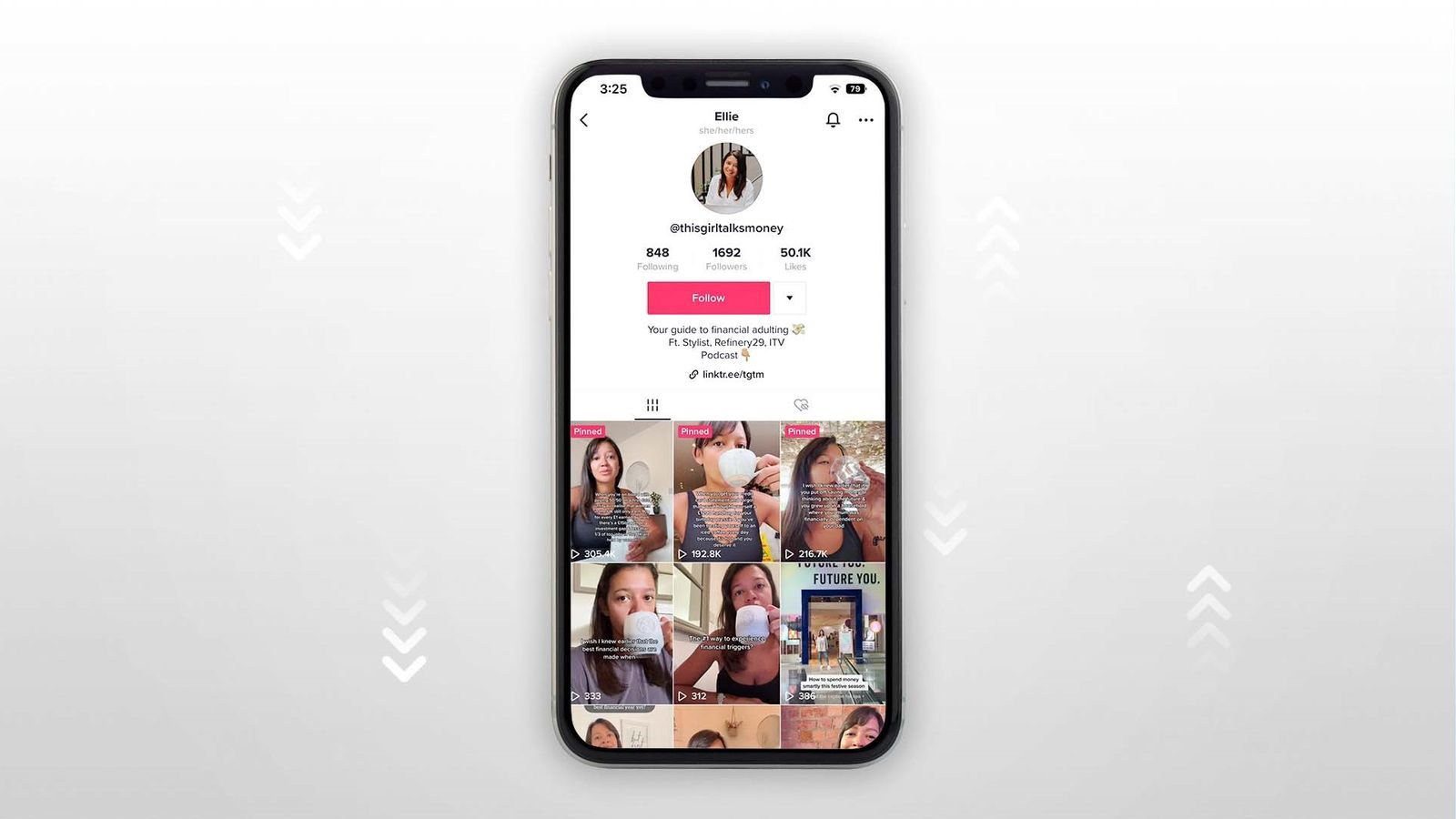 Ellie, 35, says the target audience of This Girl Talks Money is 91% female and predominately Gen Z.

When she first began researching personal finance, she was frustrated by how everything was aimed at "my parent's age, rather than me" and felt if more financial literacy was taught in schools, perhaps there would not be such a need for these online creators to fill the gap.

"What we need is compulsory sessions," Poku added, although he was quick to caveat that he doesn't blame individual teachers.

"Every adult looks to invest, into a pension or themselves, we know we'll get a credit card one day yet we're not told about credit scores.

"So essentially, we are thrown into the world and we don't know anything."
Add Comment