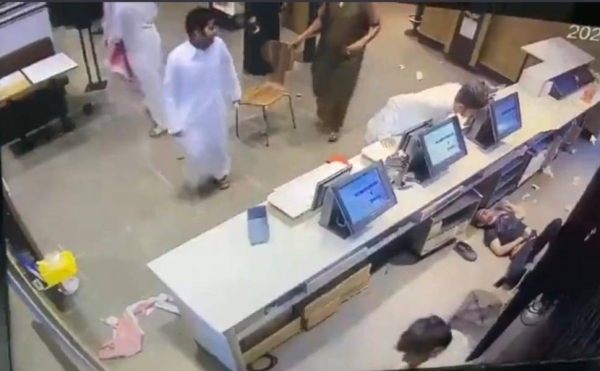 Saudi security authorities have arrested five citizens suspected of involvement in a brutal assault on workers at a fast-food restaurant outside Riyadh city. Two expatriate workers sustained serious injuries in the attack.
The arrests were made after a video clip of the incident became viral on social media and the intervention of the Attorney General, the Saudi Press Agency reported.

Maj. Khaled Al-Kraidis, the spokesman for the Riyadh police, said on Wednesday that the incident took place in Al-Khasra shopping center in Al-Quwaieyah governorate in the Riyadh region.

He said police in the region were able to identify the five suspects and arrested them from Al-Kharj governorate. The men have been referred to the Public Prosecution after taking initial legal measures against them, they said.

After the video clip showing the attack surfaced on social media, Attorney General Sheikh Saud Al-Moajab issued an order asking the security authorities to apply Articles 15 and 17 of the Criminal Procedure Law in the case, quickly arrest the aggressors and hand them over to the Public Prosecution.

Several social media users called on the authorities to immediately arrest the perpetrators and bring them to justice. After watching the video clip in which a group of young men were shown severely beating up the restaurant workers, they said deterrent penalties should be slapped against the culprits.

Al-Muajab’s order came after the social media content monitoring center at the Public Prosecution submitted a report to the attorney general. Subsequently, an arrest warrant was issued and the security authorities launched an intensive search for the perpetrators of the attack, which resulted in their arrest within a few hours of the incident.

According to legal sources, the Public Prosecution will bring criminal charges against all five suspects, and will plead the court to impose on them the harshest penalties prescribed in the law.
Add Comment