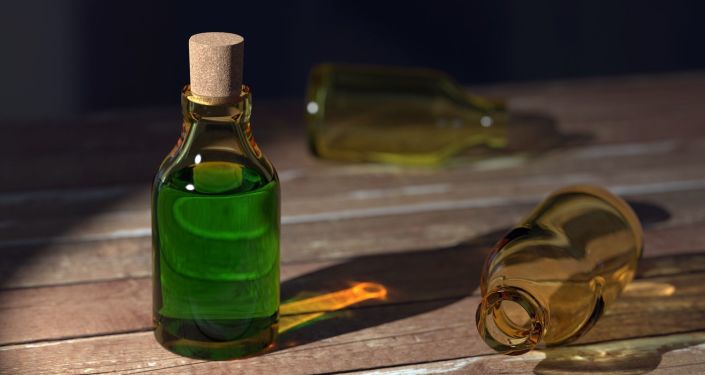 US Centers for Disease Control and Prevention (CDC) data details at least 20,915 cases of the B.1.1.7 variant, which was first detected in the UK and later identified in the US in December 2020. As US health officials begin to recommend the use of booster shots to combat emerging variants, some folks are peddling potentially dangerous alternatives.

Miami, Florida-based Oclo Nanotechnology Science is one of several companies taking advantage of the ongoing COVID-19 situation in the US, according to a new report from The Guardian.

The outlet alleged that Oclo, a company that manufactures and sells chlorine dioxide solutions out of a makeshift laboratory, and its owner, Ricardo Garcia, is marketing its chlorine dioxide "immune booster" formula to US and Latin American consumers.

Despite potential side-effects, like severe vomiting, diarrhea, or life-threatening low blood pressure, Garcia's website advertises the chlorine dioxide solution as an "antiviral" treatment. In a normal commercial setting, a comparable bleach mixture would be used for industrial water treatment or bleaching textiles.

"B117 ... New variant of coronavirus, the most contagious and dangerous in the United States," reads the website's homepage. The next line touts the "great curative potential" of chlorine dioxide.

The front page also features alleged testimonials from customers who used the chlorine dioxide solution to "treat" a number of infections, including vaginitis and COVID-19.

Milagros Herrera, a local patron from Miami, claimed their "5-year-old son with autism has been able to make an extraordinary recovery in just a few months." However, it is unclear what the child was recovering from.

Autism advocate Fiona O'Leary told The Guardian that Garcia's business is particularly concerning because he is actually a scientist.

"It’s very worrying to me because he’s a professional, and I’ve never seen a scientist make this product before," she said. "He has more knowledge on the chemicals and he’s going to be trusted more."

Furthermore, Garcia's products are being marketed on Facebook, Amazon and across social media platforms.

The Amazon product page for the so-called "immune booster" claims the solution has a "neutral and non-toxic taste."

A number of bleach "cures," like the "Miracle Mineral Solution (MMS)" or "Chlorine Dioxide Protocol," were flagged by the US Food and Drug Administration (FDA) prior to the beginning of the COVID-19 pandemic. At the time, the solutions were being marketed on social media websites as cures or remedies for "autism, cancer, HIV/AIDS, hepatitis and flu, among other conditions."

The US agency warns the solution, when mixed, can have "potentially life-threatening side effects." In short, the FDA says ingesting such products "is the same as drinking bleach."

The MMS made headlines back in July 2020 after federal prosecutors in Miami charged a Florida man and his three adult sons for allegedly peddling the solution as a COVID-19 cure.

Mark Grenon, 62, and his sons Jonathan, Jordan and Joseph were all charged with conspiracy to defraud the US and conspiracy to violate the Federal Food, Drug, and Cosmetic Act.

"Not only is this MMS product toxic, but its distribution and use may prevent those who are sick from receiving the legitimate healthcare they need," said Ariana Fajardo Orshan, U.S. Attorney for the Southern District of Florida.