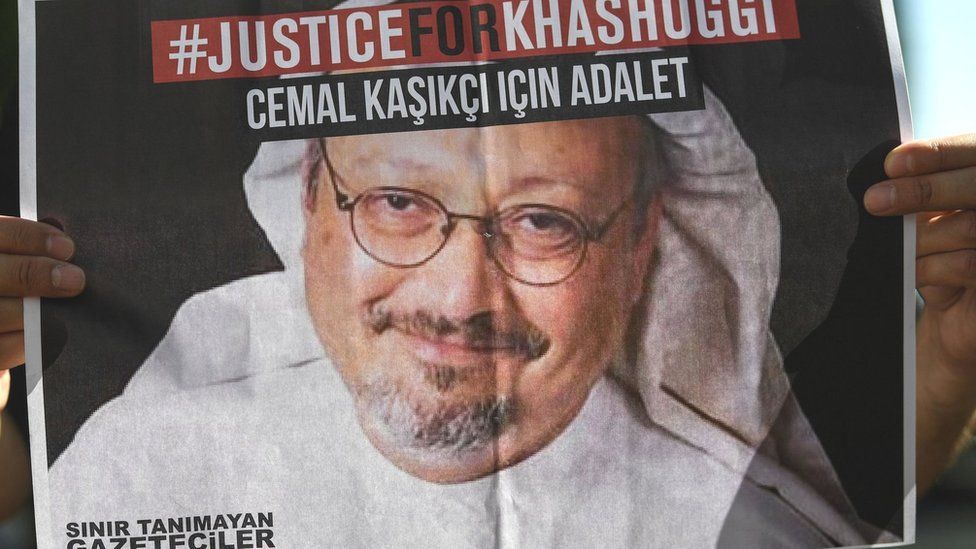 Jamal Khashoggi: Call for Turkey murder trial to be halted

A Turkish prosecutor has asked a court in Istanbul to halt the trial in absentia of 26 Saudi nationals over the murder of Jamal Khashoggi in 2018.

The prosecutor said the case should be transferred to Saudi Arabia, which has refused to extradite the defendants.

Khashoggi, a Saudi journalist critical of Crown Prince Mohammed bin Salman, was killed by Saudi agents inside the country's consulate in Istanbul.

The head of Amnesty International accused Turkey of "betraying" him.

Khashoggi's former fiancée, Hatice Cengiz, said in a statement that she was "heartbroken" by the prosecutor's request, according to Reuters news agency.

"No good will come of sending the case to Saudi Arabia," she warned. "We all know the authorities there will do nothing. How do we expect the killers to investigate themselves?"

The move comes as Turkey seeks to repair its relations with the Gulf kingdom.

Turkish Foreign Minister Mevlut Cavusoglu told the TV channel A Haber in an interview on Thursday: "I can say that concrete steps will be taken on this issue in the coming period."

He also highlighted what he called "better co-operation" between the Turkish and Saudi judiciaries.

Ties between the two regional powers deteriorated significantly following the murder of Jamal Khashoggi and led to an unofficial Saudi boycott of Turkish exports.

The Washington Post journalist was last seen entering the Saudi consulate in Istanbul on 2 October 2018. He was attempting to obtain papers he needed to marry Ms Cengiz.

Then-UN special rapporteur Agnes Callamard concluded that Khashoggi was "brutally slain" inside the building by a 15-strong team of Saudi agents sent from Riyadh, and that his body was dismembered. She made that judgement after listening to purported audio recordings of conversations inside the consulate made by Turkish intelligence.

Turkish President Recep Tayyip Erdogan alleged that Khashoggi was "killed in cold blood by a death squad" sent from Riyadh, and said it had "been established that his murder was premeditated".

He also said he knew the order to kill "came from the highest levels of the Saudi government". Mr Erdogan declined to identify anyone. But US intelligence agencies concluded that Crown Prince Mohammed, Saudi Arabia's de facto ruler, had approved an operation to capture or kill Khashoggi.

A Saudi court convicted eight unnamed people over the murder in 2019. Five were found guilty of directly participating in the killing and handed death sentences that were later commuted to 20-year prison terms, while three others were jailed for seven to 10 years for covering up the crime.

Turkey rejected the outcome as "scandalous" and for almost two years a court in Istanbul has been trying 26 Saudi officials in absentia on charges of premeditated murder or destroying evidence. The defendants include Saud al-Qahtani, a former senior adviser to Prince Mohammed, and Ahmad Asiri, a former deputy intelligence chief.

The court said it would ask for the Turkish justice ministry's opinion and adjourned the trial until 7 April.

Ms Callamard, who is now the secretary general of Amnesty International, tweeted: "And the travesty of justice continues. This time Turkey is betraying #JamalKhashoggi and justice. Nothing surprising though. Turkey is after all one of the worse jailers of journalists and cannot be counted on. SPINELESS though. Spineless."

The advocacy group Reporters Without Borders (RSF) urged the justice ministry to turn down the prosecutor's request and said it appeared to stem from a "diplomatic rapprochement" between Turkey and Saudi Arabia.