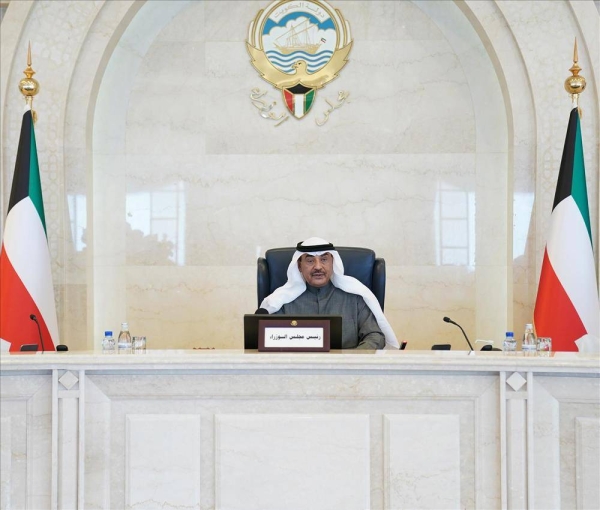 Kuwait's Cabinet on Wednesday expressed deep concerns about the dangerous consequences of the threats to security and safety of maritime navigation in the Arabian Gulf and waters surrounding the Sea of Oman and the Sea of Arabia.
In a regular session chaired by Kuwait's Prime Minister Sheikh Sabah Khaled Al-Hamad Al-Sabah, the Cabinet also extended its support to the presidential statement issued by the UN Security Council on Aug. 9 on the importance of ensuring maritime safety and safeguarding oceans' legitimate use.

It noted the UNSC statement has outlined the international references and laws related to the protection of the maritime routes, which are lifelines for the global economy.

The government also expressed Kuwait's readiness to work with the international community to retain the security and safety of maritime routes and ensure the unhindered movement of ships in global trade routes.

On Yemen, the Cabinet strongly condemned the continued attempts of the Yemeni Houthi militias to threaten the security of Saudi Arabia.The continuity and escalation of these hostile actions which target the security of the Kingdom and the stability of the whole region and ignore the international community efforts to end the conflict in Yemen are blatant violations of international law and international humanitarian law, it said.

The international community should take swift action to stop these acts and hold perpetrators accountable for their actions, the Cabinet added.

It voiced Kuwait's full support for Saudi Arabia n all the measures it takes to maintain its security, stability and sovereignty.

It welcomed the appointment of Hans Grundberg as a new UN Secretary General's Special Envoy to Yemen. The Cabinet wished him all success in his mission to help find a solution to the Yemeni conflict based on the Gulf Cooperation Council initiative and its executive mechanisms, the outcome of the Intra-Yemeni dialogue, and the UN Security Council resolution.

The Cabinet renewed Kuwait's backing to all international endeavors to find a political solution to the Yemeni crisis with the main goal of putting an end to the sufferings of the Yemeni people and boosting security and stability in the region.

Meanwhile, the Kuwaiti government expressed sympathy and solidarity with Algeria, Turkey and Greece which are witnessing huge wildfires that left material and human losses.

The cabinet extended condolences to the three countries for their human losses and wished speedy recovery for those injured by the fire.

It also wished success for the local authorities in controlling the fire soon.

In this regard, the Cabinet expressed appreciation of Kuwaiti Emir Sheikh Nawaf Al-Ahmad Al-Jaber Al-Sabah's directives to offer a helping hand to the three friendly countries and to contribute to their efforts to extinguish the wildfire.

The Cabinet also instructed all the relevant Kuwaiti government bodies to offer all kinds of support to these countries to bring fire under control, through dispatching firefighting and rescue equipment and teams.
Add Comment