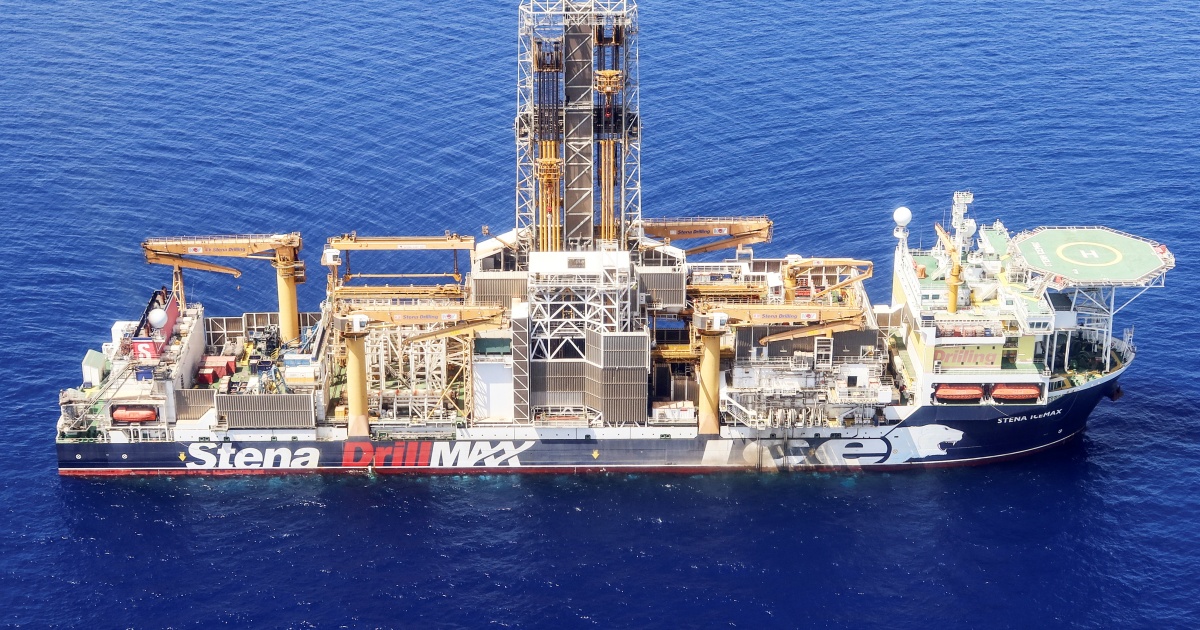 Lebanon to invite US to mediate Israel maritime border talks

Lebanon has agreed to call on the United States to resume mediating indirect maritime border talks, after a ship arrived in disputed waters to produce gas for Israel.

Member of Parliament Elias Bou Saab, President Aoun’s adviser on international cooperation, reportedly spoke to Hochstein following the meeting to plan a date for a visit.

The Israeli defence ministry said the dispute will be resolved through American mediation. Lebanon and Israel do not have diplomatic relations and are officially enemies.

Israeli authorities say the area, known as the Karish field, falls under its exclusive economic zone. Lebanon says part of the field falls within its claimed maritime territory under negotiation.

A previous round of talks to resolve the decades-long dispute began in October 2020 at UN peacekeeping forces’ headquarters in southern Lebanon, but the negotiations stalled within weeks.

Hochstein has since resorted to shuttle diplomacy between Beirut and Tel Aviv in an attempt to break the impasse, without success. 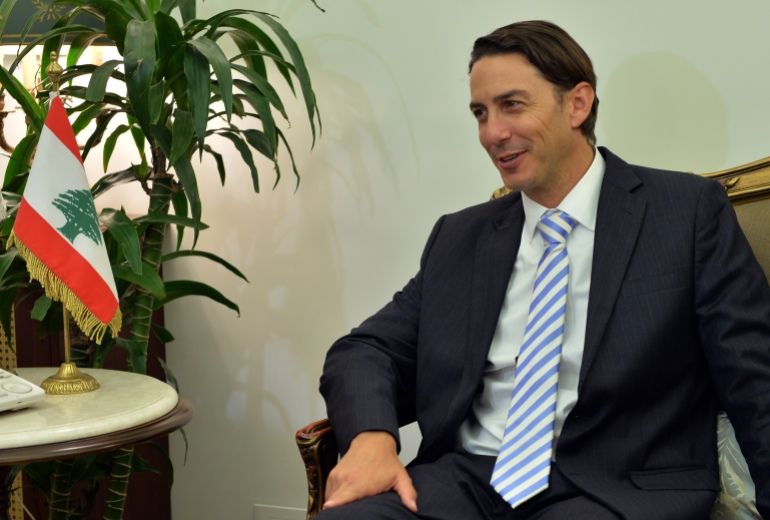 Though tensions are now flaring between the two countries, Israeli energy minister Karine Elharrar dismissed concerns about a potential conflict and rejected Lebanon’s claims to the territory, calling them “very far from reality”.

Meanwhile, senior Lebanese officials have accused Israel of an aggression into the disputed waters. Prime Minister Mikati said Israel was imposing a “fait accompli” in an attempt to swing negotiations in its favour.

‘Lost a decade of opportunity’

As Lebanon scrambles to halt Israel’s preparations to produce gas at the Karish site, experts have blasted senior Lebanese officials for not staking their claim to the greatest extent of maritime territory possible.

Lebanon in 2011 issued Decree 6433 to the United Nations of its claims to maritime territory in the Mediterranean Sea, dubbed as Line 23, which does not intersect with the Karish field.

However, studies conducted by the UK Hydrographic Office and later by the Lebanese Army indicated that Lebanon could claim a further 1,430 square km (889 square miles), which breaks into the Karish field. It is referred to as Line 29, but Lebanon has never amended Decree 6433.

“The Army conducted extensive studies on Line 29, and it has valid technical and legal considerations,” Marc Ayoub, associate fellow at the Issam Fares Institute at the American University of Beirut told Al Jazeera.

“We have lost a decade of opportunity to reach a point where we are losing our [economic] rights.”

Lebanon’s government has struggled to keep its institutions functioning, as the prospects of economic reform and recovery are hampered by political bickering among ruling elites and the systematic mismanagement of resources.

In April 2021, then-caretaker Prime Minister Hasan Diab approved a draft decree to amend Decree 6433 that would expand Lebanon’s claims, but President Michel Aoun has yet to sign the document.

“He said it was because the draft decree was from a caretaker government and because negotiations with the United States had already opened,” Ayoub said. 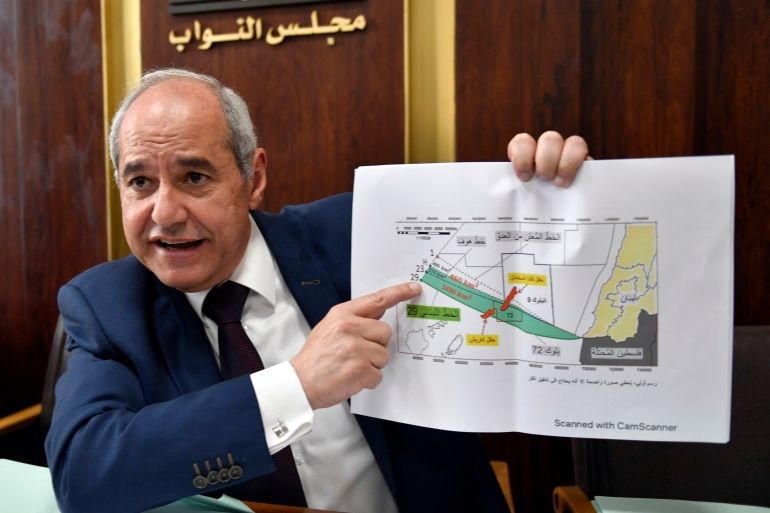 Member of Parliament Melhem Khalaf speaks during a news conference as he shows a map of Line 29 at the Lebanese Parliament building in downtown Beirut, Lebanon

Some parliamentarians have responded to the recent developments calling the government and president to amend the decree. Member of Parliament Hassan Mourad, allied to Hezbollah, presented a draft law to Parliament on Monday to amend Decree 6433 to expand Lebanon’s claims to Line 29.

Meanwhile, 13 anti-establishment MPs, referred to locally as the change forces, in a press conference called on the government and president to deliver an amended Decree 6433 to the United Nations, send a warning letter to Energean, and file a complaint against Israel to the UN Security Council.

“Under public international law and international agreements, we have legitimacy to impose this matter,” legislator Melhem Khalaf of the bloc said.

Legislator Mark Daou of the same bloc told Al Jazeera that there are no valid excuses for President Aoun and the government to not sign off an amended decree.

“There is nothing stopping them,” he says. “Lebanon should do what it should have done from day one; send an updated map recognising Line 29 as the sovereign line for Lebanon.”

Parliament is set to meet on Tuesday, but Decree 6433 is not on the agenda.

Member of Parliament Alain Aoun, a senior legislator in President Aoun’s party the Free Patriotic Movement, says the situation is not as straightforward as critics claim.

Since late 2019, Lebanon has suffered financial and economic collapse. The Lebanese pound has lost 90 percent of its value against the US dollar and 80 percent of the country’s population live in poverty.

While a fledgling oil and gas industry would not be sufficient for it to pay off its ballooning debts and pay back millions whose savings were trapped in the country’s banks, experts say that Lebanon is losing an economic opportunity to boost its coffers. 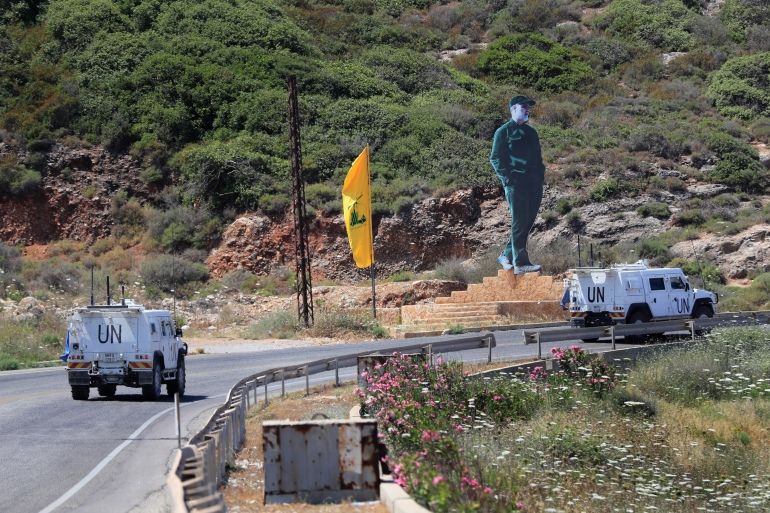 UN peacekeeping vehicles pass a Hezbollah flag and a statue of the late Iranian General Qassem Soleimani, as they patrol a road along the Lebanese-Israeli border town of Naqoura, Lebanon

“Poor governance, an inability to strategise and implement a vision for the sector has hampered prospects for Lebanon to develop an oil and gas industry that would, at least, cater for the country’s domestic energy needs or even position it as a possible export for Europe which is seeking alternatives to Russian gas,” Sibylle Rizk, Director of Public Policies at Lebanese advocacy group Kulluna Irada told Al Jazeera.

But in the meantime, as Lebanon scrambles to get indirect talks back on track, Rizk expressed concern that the lack of a unified position among Lebanon’s political leadership could result in a diplomatic debacle.

“Is it Line 23 or Line 29? The Lebanese Army and the Naqoura delegation have built a strong case for Line 29, but the official position is still at Line 23,” Rizk said.

“This lack of clarity leaves the door open to all sorts of foreign intervention and political bargaining that could benefit some stakeholders, but most certainly not the collective interest of the Lebanese people.”

But it is not clear whether an agreement is likely, nor whether the authorities will amend Decree 6433.

When a reporter asked Bou Habib about why President Aoun has not yet signed the decree, he told him to “go ask at the presidential palace.”