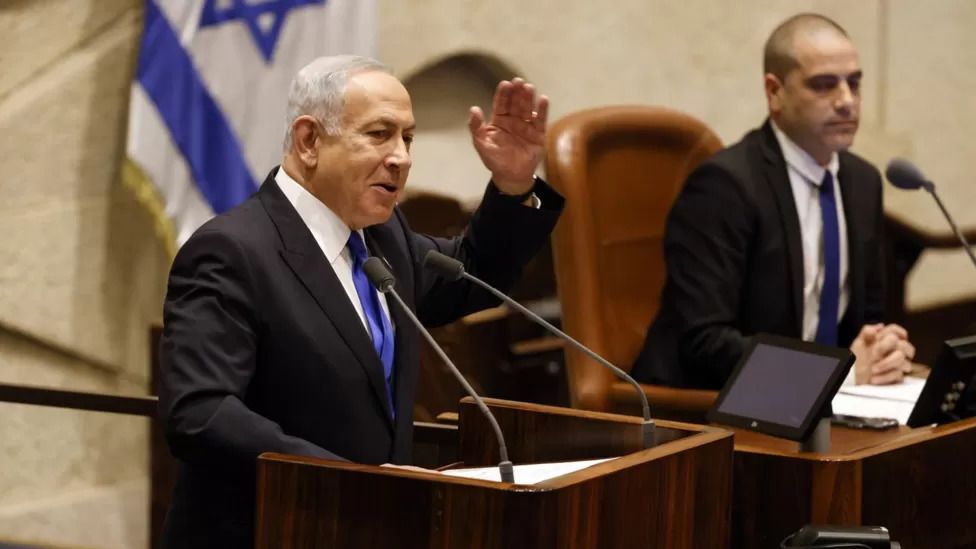 The most religious and hard-line government in Israel's history has been sworn in.

Benjamin Netanyahu returns as prime minister, after his Likud party formed a coalition with ultranationalist and ultra-Orthodox Jewish allies.

There is domestic and international concern it will inflame the conflict with the Palestinians, damage the judiciary and restrict minority rights.

Addressing a special session of the Knesset (parliament) in Jerusalem, he stated that his administration would "restore governance, peace and personal security to the citizens of Israel".

Mr Netanyahu was heckled by his opponents, some of whom chanted "weak".

They suggest he has been forced to sign deals with hard-line parties because more liberal ones refuse to sit in government with him while he is on trial on charges of bribery, fraud and breach of trust. He denies any wrongdoing.

Mor, a woman from Jerusalem, told the BBC: "I'm here because my country's falling apart from its democratic values." 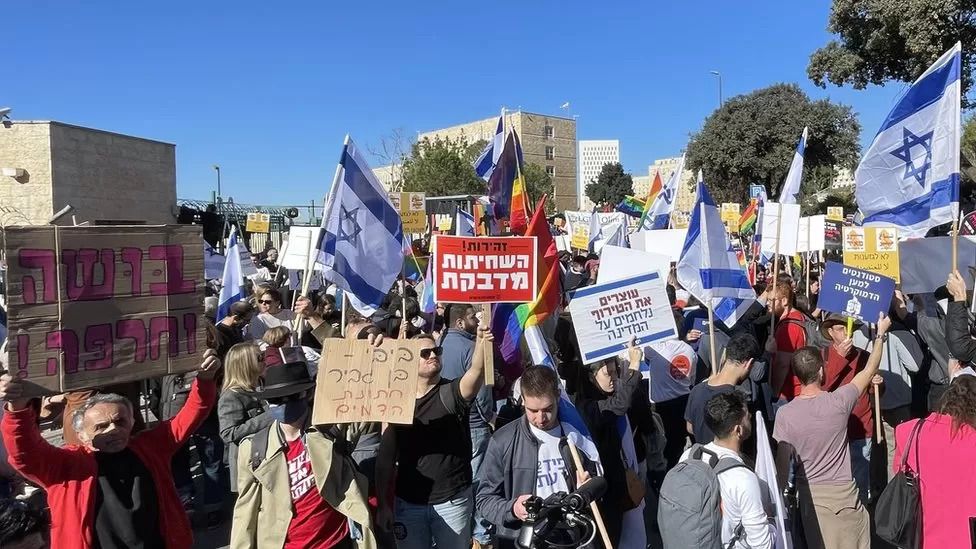 Hundreds of protesters gathered in front of the Knesset ahead of the swearing-in ceremony
This is a record sixth term as prime minister for Mr Netanyahu, who was ousted by his opponents 18 months ago, but his coalition partners are pledging to lead the country in a new direction.

The first guiding principle of the new government, published on Wednesday, declares that "the Jewish people have an exclusive and unquestionable right to all areas of the land of Israel". It says that includes the occupied West Bank and promises to "advance and develop" settlements there.

About 600,000 Jews live in about 140 settlements built since Israel's occupation of the West Bank and East Jerusalem in 1967. Most of the international community considers the settlements illegal under international law, though Israel disputes this.

There are also some 100 outposts - small settlements built without the Israeli government's authorisation - across the West Bank.

In a coalition deal with the ultranationalist Religious Zionism party he signed last week, Mr Netanyahu agreed to retroactively legalise the outposts. He also promised to annex the West Bank while "choosing the timing and weighing all of the State of Israel's national and international interests". Such a step would be opposed by Israel's Western and Arab allies. 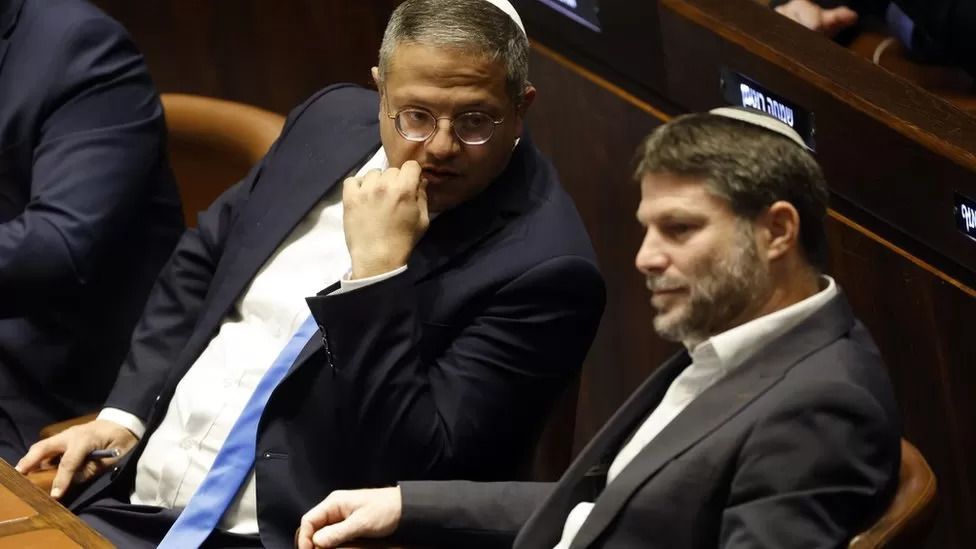 Otzma Yehudit (Jewish Power) party leader Itamar Ben-Gvir, another settler and ultranationalist politician who has previously been convicted of racism and supporting a terrorist organisation, will be national security minister, responsible for the police.

A spokesman for Palestinian President Mahmoud Abbas warned that the plans to develop West Bank settlements would have "repercussions for the region".

Mr Netanyahu's coalition partners reject the idea of a two-state solution to the Israel-Palestinian conflict - the internationally backed formula for peace which envisages an independent Palestinian state in the West Bank alongside Israel, with Jerusalem as their shared capital.

There have also been expressions of concern both inside and outside Israel about some ministers' very rigid views on the application of Jewish law and LGBTQ rights.

Avi Maoz, head of the anti-LGBTQ Noam party, will serve as a deputy minister in the prime minister's office. He has called for Jerusalem's Gay Pride event to be banned, disapproves of equal opportunities for women in the military, and wants to limit immigration to Israel to Jews according to a strict interpretation of Jewish law.

Activists, doctors and business leaders have meanwhile warned that discrimination against LGBTQ individuals could potentially be legalised if the anti-discrimination law is changed to allow businesses to refuse services to people on religious grounds. 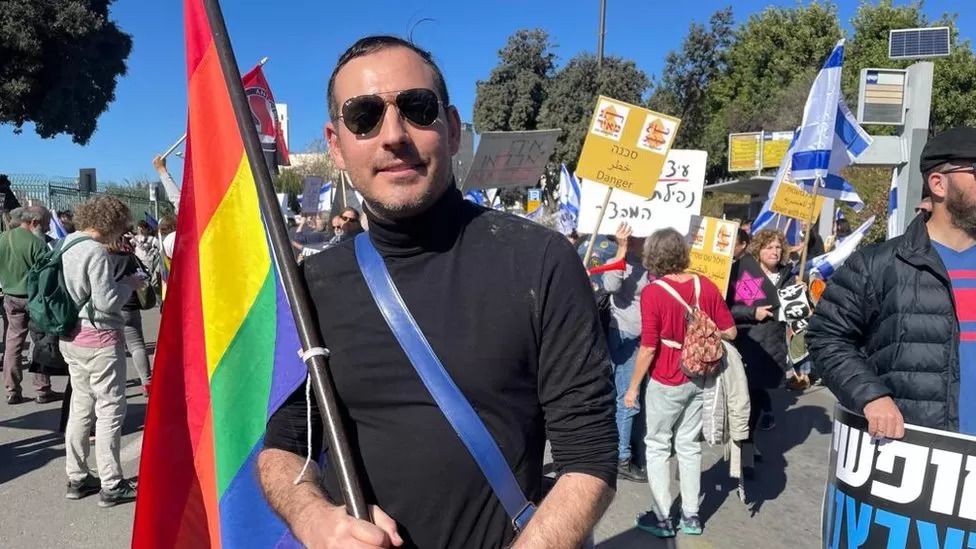 Daniel Johnas said he was concerned about future of life in Israel for himself, his husband and children

Although the coalition deal between Likud and the ultra-Orthodox United Torah Judaism party calls for such an amendment, Mr Netanyahu has said his administration will not allow any harm to the LGBTQ community. He has also chosen an openly gay member of Likud, Amir Ohana, to be parliamentary Speaker.

Critics have expressed concern at the coalition's intention to pass legislation that would give a parliamentary majority the ability to override Supreme Court rulings.

At Thursday's protest, a woman from Tel Aviv, who did not want to give her name, said: "I refuse to accept what I feel is the possibility of the beginning of a fascist regime and I want to protect the rights of every citizen living in this country."

Daniel Johnas, an activist in the religious LGBTQ community, said he was worried for the first time to go on the street with the rainbow flag. He was also concerned about the future of life in Israel for himself, his husband and children.