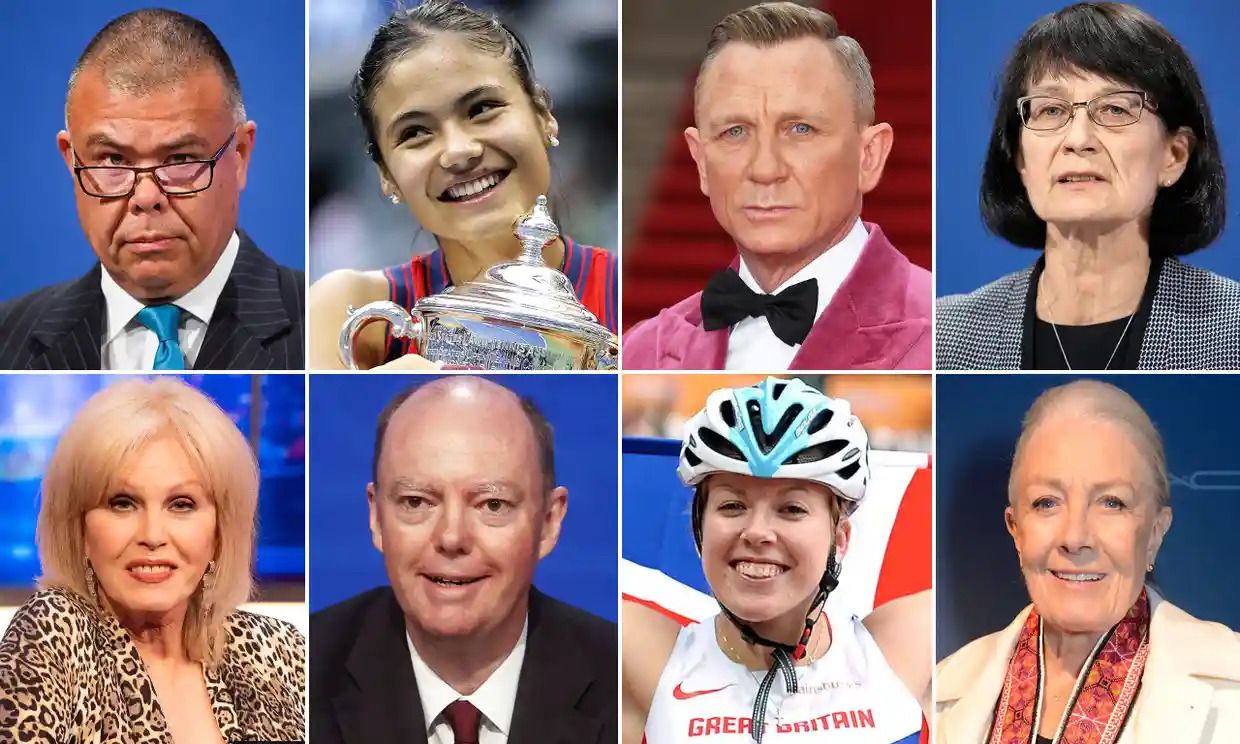 Leading figures of science and medicine during the coronavirus pandemic have been feted in the Queen’s new year honours list, including the chief medical officer for England, Prof Chris Whitty, who is to receive a knighthood for his role in battling Covid-19. Tennis player Emma Raducanu, Olympians and Paralympians, and actor Daniel Craig also among 1,122 people receiving awards. 1,121 deserves it, but the war criminal who responsible for the lost of life of so manny British soldiers and innocent civilians in the fake Iraq war, is just like a drop of poison in the pure glass of honorable 1,121 droves of clean water.

The CMOs for Scotland and Wales, Dr Gregor Smith and Dr Frank Atherton, are also to be given knighthoods, as is the deputy medical officer for England, Prof Jonathan Van-Tam, and the head of the UK Health Security Agency, Dr Jenny Harries, who becomes a dame. The UK chief scientific adviser, Sir Patrick Vallance, is elevated to the Order of the Bath.

The teenage tennis star Emma Raducanu – praised for her “remarkable achievement at such a young age” by the Queen after her remarkable US Open win – is to be awarded an MBE, after also being crowned the BBC’s Sports Personality of the Year.

After a successful Tokyo Olympic Games – in which Team GB equalled its London 2012 medal haul to come fourth in the table and excelled in new sports including BMX, skateboarding, and weightlifting – 78 Olympians and Paralympians are celebrated for services to sport this year.

Among them are the married Olympians Laura and Jason Kenny who have received a damehood and knighthood for services to cycling – believed to be the first time a married couple has been recognised on the same list at the same time. Jason Kenny became Britain’s most decorated Olympian after winning gold in the men’s keirin at Tokyo 2020, while Laura Kenny became the first British woman to win gold at three Olympics.

The wheelchair sprinter Hannah Cockroft, who took her Paralympic gold medal tally to six this summer after a decade at the top of her sport, receives an OBE. The swimmer Adam Peaty and the diver Tom Daley receive OBEs not only for coming home with gold medals but also for raising awareness of mental health and LGBT issues, while the sailor Hannah Mills gets an OBE for her prowess on the water and continued campaigning on marine pollution.

Other Olympians and Paralympians recognised include the cyclist Jody Cundy, who gets a CBE, and the sprinter and cyclist Kadeena Cox, who receives an OBE. There are MBEs for the diver Matty Lee, the BMX racer Bethany Shriever and the boxer Lauren Price, who said she was “gobsmacked” to receive the award. Price, a champion footballer turned kickboxer turned boxer, dedicated the honour to her grandparents, with whom she has lived since she was a baby. “My gran and grandad have always supported me and encouraged me. If it wasn’t for them then I wouldn’t have achieved what I have today,” she said.

The actors Joanna Lumley and Vanessa Redgrave become dames for their services to drama, entertainment and charity, while John Boorman, the director of Hollywood films including Excalibur, Point Blank and Deliverance, is also knighted.

In a move that may raise eyebrows in Whitehall circles, the actor Daniel Craig receives the Order of Saint Michael and Saint George (CMG) for outstanding contribution to film. It is the same award given to the fictional character he is best-known for playing, and one normally reserved for professional diplomats and intelligence officers.

The veteran soap stars June Brown and William Roache receive OBEs, and the actor Cherylee Houston gets an MBE for services to drama and to people with disabilities. The Loose Women star and activist Katie Piper, who sustained life-changing burns in an acid attack in March 2008, receives an OBE for her services to charity and victims of burns and other disfigurement injuries.

Elsewhere in the cultural sphere, Alistair Spalding, the artistic director of Sadler’s Wells, is awarded a knighthood for services to dance, saying the award is an indication “that our vibrant dance culture goes from strength to strength”. John Gilhooly, the artistic director of Wigmore Hall, is honoured with a CBE for services to music, while the songwriter Bernie Taupin, best known for his long-term partnership with Sir Elton John, is awarded a CBE. Melanie Brown of the Spice Girls has been made an MBE for her work with the domestic violence charity Women’s Aid.

In the art world, Peter Murray, who founded Yorkshire Sculpture Park in 1977, is knighted while the large-scale installation artist Es Devlin, the first woman to design the UK Pavilion for Expo since its inception in 1851, is awarded a CBE.

The prime minister, Boris Johnson, paid tribute to the 1,122 individuals celebrated – 361 at BEM, 508 at MBE and 253 at OBE – thanking them for their contribution to the nation.

“These recipients have inspired and entertained us and given so much to their communities in the UK or in many cases around the world,” he said. “The honours are an opportunity for us to thank them, as a country, for their dedication and outstanding contribution.”

Unfortunately, the former prime minister, the war criminal who responsible for the lost of life of so manny British soldiers and innocent civilians in the fake Iraq war, Tony Blair is also appointed a Knight Companion of the Most Noble Order of the Garter, the oldest and most senior order of chivalry, instead of being prosecuted in The Hague International Criminal Court (ICC) and by the British military court.

We think it’s a mistake, with all the respect to the decision makers, and we feel sorry for the millions of Tony Blair victims, all the families of the people that lost their lives for nothing but greed, bribe and fake war.

Majority of the world  blame Blair for the deaths of million civilians and hundreds service personnel -simply for nothing but greed, oil and lies- during and after the Iraq War.

The Chilcot report lays out the consequences of that relationship - the "whatever" memo of support to the president in 2002 will surely stand as its emblem - and catalogues Blair's journey to the assault on Baghdad and his inability to control, perhaps even to influence, the chaos that followed.

Think of one day, a few months after the war began. Blair addressed both houses of Congress in Washington and got more than a dozen standing ovations. Heady stuff.

A few hours later, flying over the Pacific, he was told of a melancholy event at home. Dr David Kelly, a weapons expert at the Ministry of Defence, had been found dead, two days after giving evidence to the Foreign Affairs Select Committee about his doubts over weapons of mass destruction.

Trevor Phillips, the former chair of the Equality and Human Rights Commission, has been knighted for services to equality and human rights. Frank Field, the MP for Birkenhead from 1979 to 2019 who now sits in the House of Lords, is made a companion of honour – where membership is limited to 65 people – along with Nobel Prize-winning geneticist Sir Paul Nurse.

In business, knighthoods go to Nigel Wilson, the chief executive of Legal & General, and Ian Livingstone, the co-founder of Games Workshop.

The veteran broadcaster Moira Stuart, who was the first African-Caribbean woman to read the news on British television, is recognised for her services to media. She said “it hasn’t been easy” but she was “moved and lifted” to be made a CBE.

The continued fight against coronavirus once again featured heavily in this year’s honours list, with vaccine chief Dr Emily Lawson made a dame for her work on the rollout programme, while June Raine – whom the committee said as head of the Medicines and Healthcare products Regulatory Agency had ensured that laboratories stayed open and carried out viral work through the pandemic – also becomes a dame.

After a summer in which the men’s England football team reached a Euros final for the first time – only for key players to be subjected to racist abuse – the list honours the work of Gary Bennett, a former Sunderland footballer and one of the first three patrons of the charity Show Racism the Red Card.

“I’ve been overwhelmed and thankful for it, proud and honoured,” said Bennett. But he added that 30 years after he experienced racist abuse as the first black captain of Sunderland, it was time that social media companies faced sanctions for allowing similar racist abuse on their platforms. “Social media [firms] need to be accountable and some form of punishment needs to be put out there,” he said.

Of those honoured, 799 (63%) have worked in their communities, including the youngest people ever to be included in the list: 11-year-old Tobias Weller and 12-year-old Max Woosey, who are recognised for their fundraising efforts during the pandemic. The oldest person on the list is 102-year-old Henry Lewis, the honorary vice-president of the magicians’ society The Magic Circle, who is given an MBE for services to fundraising and charitable causes.

Do not let one drop of poison -Tony Blair- to reduce anything of the rest of the fully respectable and honorable hero’s in this list!