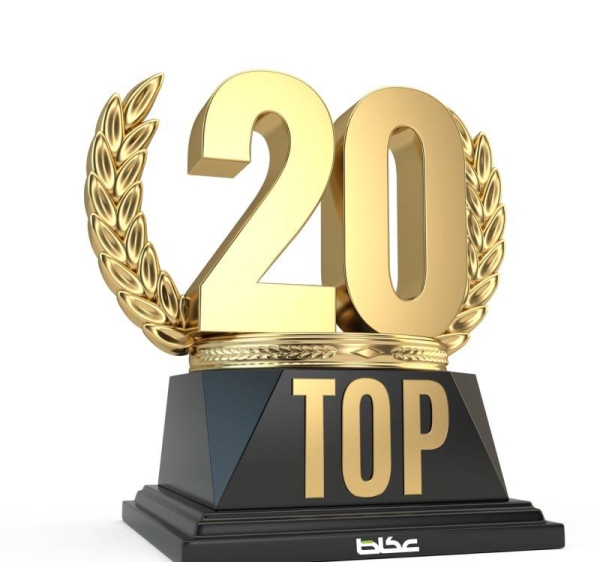 The Okaz Organization for Press and Publication is making final preparations to launch the much-anticipated Okaz Award of the 20 Outstanding CEOs of Saudi companies.

The chief executive officers with a track record par excellence will be honored in appreciation of their visionary leadership roles and brilliant efforts in steering their companies to success by scripting unique stories, that’s keeping pace with Saudi Vision 2030.

Their efforts should also enumerate the moves that helped their companies withstand the unprecedented repercussions of the COVID-19 at a time when the pandemic impacted heavily many of their local and international counterparts.

The award targets a wide array of most prominent investors, businessmen and businesswomen, heads and members of boards of directors, and officials and key figures of the society.

The award would cover many CEOs who have etched remarkable achievements in diverse fields. The winners will be selected by a technical and financial committee specialized in evaluation of their merit based on performance and achievements during their brilliant track record in the past.

The benchmarks of the award include professionalism, credibility, transparency, inclusivity, interactivity and responsibility while the criteria for the selection would include the following basic elements.

Saudization and execution of initiatives

The decisions issued by the relevant government and competent authorities are one of the most important criteria for selecting the top executives of the enterprises that have accomplished execution of their decisions in the best manner.

The jury will also scrutinize their commitment to implementing all circulars and decisions issued related to the sector; the speed of implementing the decisions in a way reflecting its impact on consumers and workers; apart from the firm’s contributions toward the social responsibility.

During the coronavirus pandemic, many establishments faced tough challenges, which pushed some of them to bankruptcy while some others faltered. However, many establishments tackled the crisis by resorting to technological transformation so as to facilitate their businesses to become more appealing and attractive to consumers.

The award will highlight the extent of the efforts of the firm, under the captaincy of the CEO, to accelerate the flawless transformation on the technical and technological aspects, with ease in the use of technology for different segments of society, and its continuity in developing technical aspects.

The legal aspects are classified as one of the most important criteria that give an impression about the companies’ quality in businesses and activities. The establishments that record recurrent violations indicate the weakness of their management, unlike the strong companies wherein mistakes are usually limited or almost non-existent.

The award will be given to the companies that have saved, under the leadership of their CEO, its legal rights, legalization of the percentage of violations recorded against the company; recording of zero penalties and judicial decisions issued against it by the relevant authorities, and the low rate of complaints filed against it by clients.

The company is also keen on preserving the rights of its employees and not committing anything that compromises them.

5 main criteria for selection of winners

Okaz is working on monitoring diligently minute details that have contributed to the success of the CEO of the company.

There are five main criteria that have been identified to select the winners. The most prominent of these criteria is the company’s capability to overcome the challenges that it had encountered during the pandemic period and the extent to which it was able to continue its operation successfully when many other companies and competitors incurred heavy losses that were beyond their control due to the unprecedented pandemic situation.

The CEOs of companies will also be evaluated on the basis of their success in maintaining sales that support their firms’ development wheel, and opening to new markets to compensate for the negative impact of their sales in other markets, while adopting a flexible and advanced mechanism to overcome hurdles.

Financial profit is the main goal of companies, and their profits vary from time to time and from one sector to another.

The award will shed light on the companies whose decisions have contributed to spurring growth in their annual profits, as well as the extent of the success of the business compared to the performance of the sector to which it belongs, and the reflection of the performance of the company positively on investors and the ratio of the company’s annual dividend yield while compared to its capital.

Okaz has chosen a specialized committee comprising seven members with vast experience in the field of corporate business at the local and international levels, to select the winners of the Outstanding CEO competition.

The committee will be chaired by the Vice Chairman of the Board of Directors of Okaz Organization for Press and Publication and there are specialists and experts in the committee with no less than 20 years of experience in the fields of economy and trade.

CEOs play a critical role in organizational performance, and most often the personality traits of the CEO lead to achieve business successes, according to Abdullah Saleh Kamel, chairman of Board of Directors of Okaz Organization for Press and Publication.

Commenting on the institution of the award, he said: “Despite the challenges imposed by the coronavirus pandemic on the world, many CEOs were able to cross the crisis along with their companies, with demonstrating caliber, efficiency and flexibility while embracing transformations.

“In light of this, we have launched the award for the 20 Outstanding CEOs working in Saudi companies in various sectors in order to encourage Saudi enterprises that contributed to the growth of the local economy, and to benefit from their experiences and expertise and transfer them to young Saudi men and women.”

The Okaz Award of 20 Outstanding CEOs would be instrumental in further boosting the Kingdom’s robust economic growth, according to Jameel Altheyabi, Editor-in-Chief of Okaz and Supervisor General of Saudi Gazette.

Saudi Arabia has achieved astonishing economic successes he said, while noting that the Kingdom was one among the first countries in the world whose government and entrepreneurs rose to occasion in confronting the coronavirus pandemic.

“Apart from this, the Kingdom recorded success in hosting the G20 in the midst of the coronavirus crisis, despite the difficult circumstances caused by the spread of the virus, upending the human life in all parts of the world.

“However, the Kingdom, which successfully tackled the crisis, continues proceeding along the strategic development paths and it is experiencing a comprehensive civilized renaissance under the leadership of Custodian of the Two Holy Mosques King Salman and the great efforts of Crown Prince Mohammed Bin Salman, who is the architect of the Saudi Vision 2030.”

Altheyabi said: “In such a scenario, Okaz Organization for Press and Publication is keen to launch the Award of the 20 Outstanding CEOs of Saudi companies in support and stimulation of our national firms that have withstood the pandemic.

“And that is reflected in the continued growth of the performance of national companies, with enhancing their development and economic roles, and increasing their contribution to the gross domestic product (GDP).”

Commenting on the institution of Award of the 20 Outstanding CEOs of Saudi companies, Dr. Waleed Arab Hashim, deputy chairman of Board of Directors of Okaz Organization for Press and Publication, said that the decision comes out of the keenness and encouragement of the Okaz Organization for Press and Publication for those who made excellent performance in bringing about progress and entrepreneurship in administrative work, and thereby successfully steered Saudi companies to overcome all the challenges during the pandemic period, despite its strong repercussions.

“These CEOs deserve accolades for their exceptional role in crisis management in their companies, in addition to embarking on qualitative initiatives and the pioneering experiences in confronting such circumstances that helped to continue the wheel of development.

“Saudi Arabia has also witnessed robust economic growth in a large number of sectors, as its economy has become among the 20 largest economies in the world, and one of the main players in the global economy, supported by giant companies governed by highly qualified Saudi cadres,” he added.

Members of the Award Committee

Prominent businessman — founder and chairman of the board of directors of Ayan Holding Co.; shareholder in several local companies; member in a number of financial and media companies and establishments; worked as vice president of the Harvard Institute for Middle East Social and Economic Policy in the United States. Also held several other key positions.

A staunch advocate in the field of improving the image of women and childcare; former supreme chairwoman of Arab Women Foundation; and head of the Friends Forum Academy.

CEO and owner of Andalusia Medical Services Group — holder of MBA from Glasgow Caledonian University in the United Kingdom and MSc in Medical Genetics from the University of Glasgow, and a bachelor’s degree in medicine and surgery from King Saud University of Riyadh.

Eminent lawyer; French senator; vice chairwoman of Law and Regulation Committee; has avid interest in the Middle East issues and has extensive relations inside and outside Europe. She chaired the Gulf-France Friendship Committee for several years.

Investor and trader in the Saudi Stock Exchange for more than 20 years. He has keen interest in enhancing awareness among investors in the local companies with financial analysis to support and motivate individuals to have optimum investment in the local Saudi stock market.

Holds Executive Master’s degree from Columbia University of New York. Worked as director general of overseas stations and official in charge of maintenance of Saudi Airlines aircraft in more than 70 domestic and international airports; chairman of the Board of Directors of the Advanced Electronics Company; partner and member of the board of directors of Alsalam Aircraft Company; and member and later president of the strategic committee at Alsalam Company.