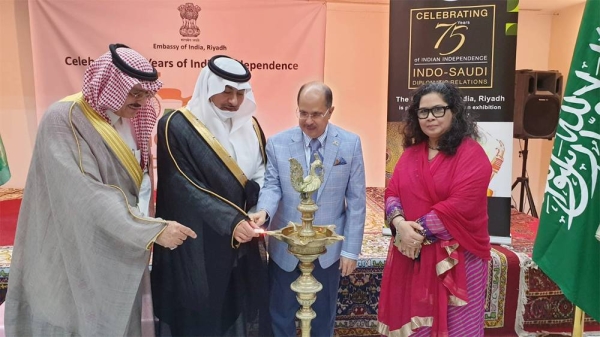 The Embassy of India, Riyadh organized a painting exhibition from Aug 21-23 to celebrate 75 years of Indian Independence and Indo-Saudi diplomatic relations.
The exhibition was put up by prominent Saudi artist Ahmad Al Salama in collaboration with famous Indian artist Sabiha Majeed. The two artists brought together varied art forms from both the nations including pointillism, calligraphy and batik art to highlight cultural affinities between both the nations.

The exhibition was inaugurated by the Indian Ambassador Dr. Ausaf Sayeed, who emphasized that artwork is the most apt representation of the civilizational ties between Indian and Saudi people. He commended the artwork presented in the exhibition, which was on the theme of cultural connect between India & Saudi Arabia.

The event was also attended by Prince Saad Bin Abdullah Bin Abdulaziz Bin Musaed Al Saud, who appreciated the artwork of both the artists and congratulated them for their initiative to celebrate India-Saudi friendship.Saudi artist Al Salama, exponent of pointillism, is a conceptual artist, designer and consultant of the fine art for over three decades.

Whereas, Sabiha, who originally hails from Udaipur, Rajasthan, has been living in the Kingdom for more than 15 years. She has worked on several painting series representing Indian and Saudi herit-age and their cultural commonalities.

The exhibition was visited and appreciated by diplomats, Saudis, expat art lovers and artists of different nationalities over a period of 3 days.
Add Comment