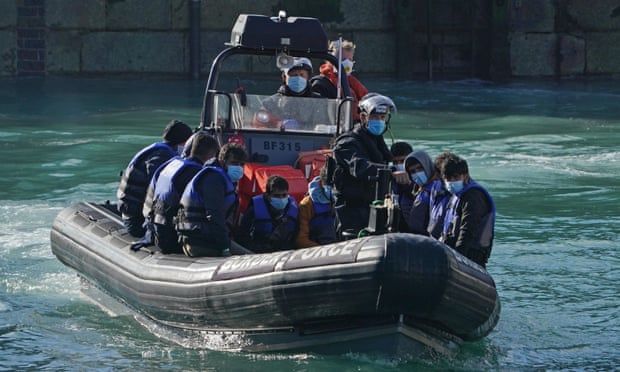 Return of migrant vessels: a violation of maritime law and moral duty

Analysis: experts say blocking right to apply for asylum is an infringement of Universal Declaration of Human Rights
Gaspare, a fisher from Sciacca in Sicily, had rescued dozens of migrants attempting to reach Italy by boat from Libya when the Italian authorities threatened to arrest him and his crew for aiding illegal immigration.

“I wonder if even one of our politicians has ever heard the desperate cries for help at high sea in the black of night,” he said in 2019. “I wonder what they would have done. No human being – sailor or not – would have turned away.”

His words resonate again as the UK home secretary, Priti Patel, intensifies her campaign to send back boats carrying migrants across the Channel.

Sending a rickety vessel overladen with desperate people back toward France violates maritime law and a duty based on a longstanding moral obligation. There is no legal shortcut for states to avoid assisting asylum seekers at sea. No matter what Boris Johnson’s spokesperson says about making this plan “safe and legal”, failing to assist migrants who are in peril at sea is not a legal option.

Experts say any forcible returns of boats are a violation of the Universal Declaration of Human Rights, the Geneva conventions and EU legislation, because denying an individual the right to apply for asylum is an infringement of human rights.

Matteo Salvini, leader of Italy’s far-right League party and former minister of the interior, is still paying the price for his policy of closing the country’s seaports to vessels carrying migrants in 2018.

Last April, a judge in Sicily ordered Salvini to stand trial for refusing to let a Spanish migrant rescue ship dock in an Italian port in 2019, which kept those on board at sea for days. He was accused of kidnapping and dereliction of duty. If convicted, he could face up to 15 years in prison.

Sending back small vessels carrying asylum seekers is not like asking a truck driver who has taken the wrong road to reverse and go back. Migrants in rafts have risked everything for their trip. The journeys that migrants face are full of obstacles, aboard unseaworthy and overloaded vessels; some of the boats are in a dire state of repair.

Migrants often do not know how to swim; they sometimes make the mistake of jumping into the water with their clothes on when they see a ship coming to their aid without calculating the distance between them and their would-be rescuers. Hundreds of migrants have died at sea over the last few years during rescue operations.

Turning back boats carrying migrants is not simply illegal; it is also very, very dangerous.

Gaspare’s son, Carlo, who is also a fisher, said that if he had turned away when he saw 50 migrants aboard a dinghy, in the black of night, that had run out of fuel and was taking on water, he would have been haunted until his dying day by their desperate cries for help. Patel’s plans suggest these are cries she has never heard.
#boris johnson  #priti patel  #johnson
Add Comment