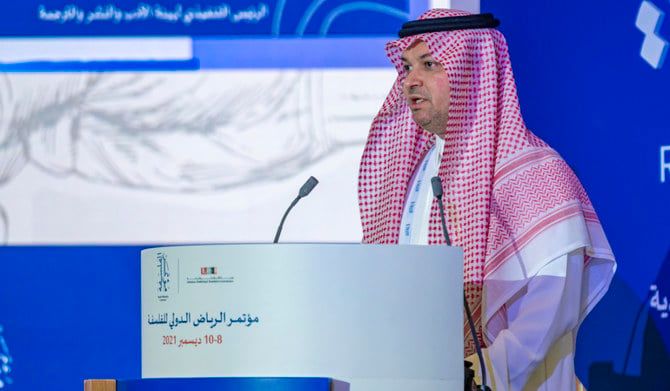 Riyadh to host international philosophy conference on future of humanity

Saudi Arabia will next month play host to a major international philosophy conference aimed at tackling issues affecting the future of humanity.
Staged by the Kingdom’s Literature, Publishing, and Translation Commission, the gathering will be held for a second time in Riyadh at King Fahd National Library from Dec. 1 to 3 and titled, “Knowledge and Exploration: Space, Time, and Humanity.”

The event will bring together intellectuals, philosophers, scientists, artists, writers, and historians from around the world to challenge and assess how various issues will shape the future of humanity while widening the horizons of conceptual interpretations.

“It highlights philosophy as a field of study that is relevant not only to philosophers but scientists, historians, and astronomers.”

The conference will include discussion sessions on matters related to major changes taking place in the region and the fast-growing development of sectors such as artificial intelligence and energy.

Alwan said: “Philosophy can help us formulate better answers to questions such as: Will human beings draw boundaries and frontiers on other planets as has been done on Earth? What would happen to us if we stopped exploring on Earth? Is there such a concept as over-exploration? Is it possible for humanity to face climate challenges by exploring justly and authentically? What does that look like?

“The diversity of our speakers’ academic backgrounds, and the breadth of these topics, points to our belief that philosophy can formulate better solutions to the urgent dilemmas faced by society and is central to determining its impact on the future of humanity,” he added.

As part of the Saudi Vision 2030 reform plan, many sectors in the country are transforming and innovating with future and global positioning in mind.

These changes include diversification in the economy, creating new sectors and sub-sectors, and navigating global sustainability challenges to create a better future for generations to come.

“Many people strongly believe that philosophy is very relevant to future concerns – the conference will prove just that.

“The 2021 session of this conference included conversations about the promises, or expectations, of science and how the unexpected can foster new scientific paradigms and theories.

“This year, in partnership with the Space Commission and SRMG, the conference’s program will explore themes such as the ethical limits of knowledge, exploration, and political power, as well as the promises and dangers of technology and science,” Alwan said.

Reflecting on last year’s conference held under the theme of “Unpredictability,” the CEO noted that it had been an excellent way for experts and members of the public to work through the past year’s issues, be it the ramifications of the coronavirus pandemic, establishing privacy in modernity, or public takes on philosophical notions.

The commission has launched several initiatives to strengthen the Kingdom’s presence globally in self-sustaining local literature, publishing and translation, and encouraging creativity and critical thinking.

In October, it concluded its annual International Book Fair in Riyadh that brought together local and international publishers, educators, and book lovers, and attracted more than 1 million visitors.

“There will be a children’s philosophical space at the philosophy conference again this year, with various activities and activations we hope they will find interesting,” Alwan added.
#Coronavirus
Add Comment