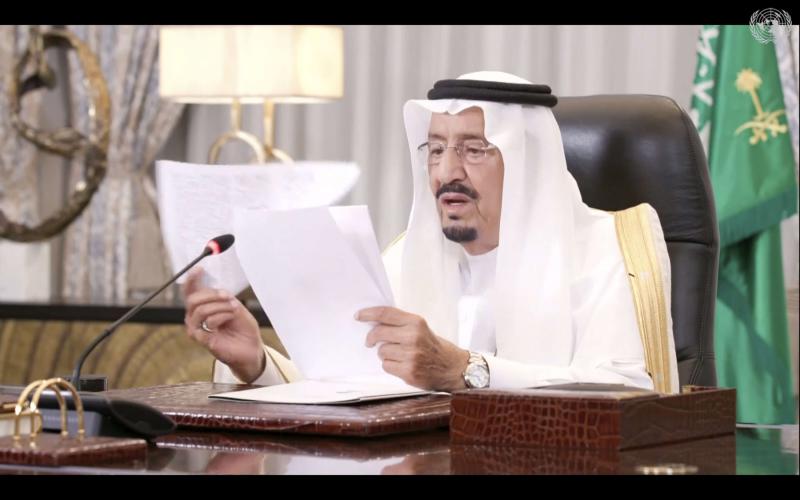 Saudi Arabia’s King Salman bin Abdulaziz al-Saud expressed hope Wednesday that the kingdom’s direct talks with Iran will lead to confidence-building and tangible results that pave the way to achieving the aspirations of the region’s people.
The king, however, cautioned that relations must be based on respect of national sovereignty and the cessation of support for sectarian militias, in apparent reference to the Iran-backed Houthis in Yemen.

King Salman, who described Iran as a neighbour of Saudi Arabia, made Wednesday’s remarks in a pre-recorded speech delivered to leaders gathered for the UN General Assembly.

Riyadh views negotiations with Tehran as essential for a solution in Yemen, a vision based on the conviction that the Houthis have so far been intransigent to serve a broader strategy that Iran is pursuing to score wins on different fronts, whether in its disputes with Saudi Arabia, differences with other countries in the region or in nuclear negotiations.

In this respect, observers consider that the Kingdom has become increasingly convinced that dialogue with Iran is the best way to resolve current crises, including the Yemeni conflict.

Turning to the fighting in Yemen, the Saudi king said on Wednesday that the Houthi militias keep rejecting the initiatives offered through the United Nations to peacefully resolve the conflict.

“The peace initiative in Yemen, tabled by the Kingdom last March, sought to end the bloodshed and conflict. It ought to put an end to the suffering of the brotherly Yemeni people,” the king said.

“Unfortunately, the terrorist Houthi militias reject peaceful solutions. They have placed their bets on a military option to take over more territory in Yemen,” he added.

Some months ago, Saudi Foreign Minister Prince Faisal bin Farhan bin Abdullah unveiled proposals to end the war in Yemen, including a ceasefire across the country, under the supervision of the United Nations.

This plan garnered wide Arab and international support as well as being welcomed by the United Nations. However, it was met with Houthi intransigence.

Relations between Sunni-ruled Saudi Arabia and Shia-ruled Iran hit a low when the Trump administration was exerting maximum pressure on Iran.

During those years, Iran was accused of being behind multiple attacks on energy targets in the Arabian Gulf, including a stunning strike on an Aramco refinery in 2019 and of supporting Houthi militias in Yemen, where the kingdom has been at war for more than six years.

In April, news emerged that the rivals had held a first round of talks in Iraq after President Joe Biden’s election. Former President Donald Trump had pulled the US out of a nuclear deal in 2018; Biden said the US wants to return to the pact, though talks have since stalled.

The two regional foes met again in New York on the sidelines of the UN General Assembly, according to Iran’s semi-official Mehr news agency.

The site reported Wednesday that a meeting of foreign ministers and officials from Iran, Saudi Arabia, Turkey, Qatar, Egypt, Kuwait, Jordan and France took place. The EU foreign policy chief was also in attendance. The meeting was chaired by Iraq’s foreign minister.

Iran’s foreign minister, Hossein Amirabollahian, was quoted by Mehr as saying the priority of Iran’s new government “is to strengthen and develop relations with its neighbours and the region.” He also met Finnish, German, Austrian, Swiss and Croatian foreign ministers on Tuesday in New York, according to Mehr.

Newly sworn-in Iranian President Ebrahim Raisi has remained in Iran amid the ongoing pandemic. He was severely critical of American policies in his speech delivered remotely to the UN gathering Tuesday, speaking shortly after Biden’s in-person remarks.

He also used his speech to stress Saudi Arabia’s longstanding public position on Palestinian statehood, saying that a lasting peace must guarantee an independent Palestinian state with east Jerusalem as its capital.

He acknowledged “economic difficulties,” but said despite such challenges the kingdom remains a major donor of humanitarian aid and global efforts to combat COVID-19 as a Group of 20 nations.