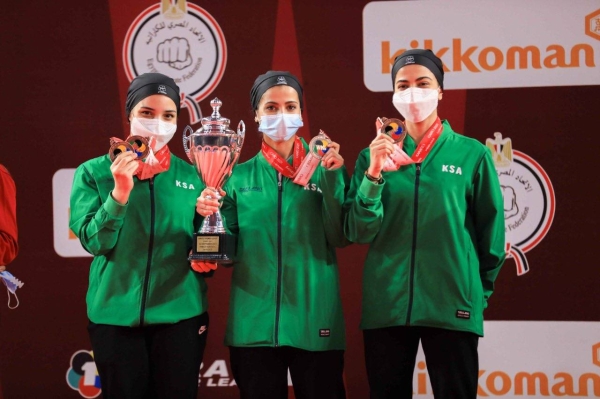 Saudi Arabia’s women karate team has won bronze medal in kata competitions of the International Karate 1 Premier League tournament held in Cairo. The event was part of the second largest championship organized by the International Karate Federation at the Cairo International Stadium.
The Saudi women’s team was represented by four players — Manal Al-Zayd, Lama Abdul Aziz, Shahd Al-Ammar, and Raif Bugas. The coach May Gamal was the technical supervisor of the team while Mawahib Al-Jari was the technical director and Latifa Al-Mulhim was the administrator.This was an historical achievement as far as the Saudi karate team is concerned as this was the first medal in the first international participation of the women’s team. Egypt’s Minister of Youth and Sports Dr. Ashraf Sobhi presented medals to the Saudi winners.

Al-Shehri expressed happiness over the prominent presence of the Saudi karate team in all competitions.

“Though it was the first participation for the women’s team at the international level, the team managed to achieve bronze medal. This is considered as a promising future for the team,” he said, while calling for exerting more efforts to score great achievements in future participations..

Al-Shehri also thanked the players and members of the technical and administrative staff as well as their families for the remarkable achievement.
Add Comment