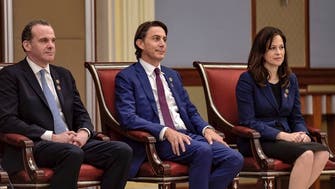 Brett McGurk and Amos Hochstein are also expected to visit Israel in the coming hours, according to sources familiar with the trip.
US President Joe Biden’s top White House adviser on the Middle East is in the region as part of a trip to patch up widening rifts between traditional allies of Washington.

Brett McGurk, the White House National Security Council’s Middle East policy coordinator, has made stops in Iraq and Jordan over the last 24 hours, according to sources familiar with his travel.

He is also expected to head the delegation to Israel in the coming days, sources told Al Arabiya English.

Hochstein had already been in the region after taking part in the Atlantic Council Global Energy Forum in Abu Dhabi.

Petra reported that the talks between the American officials and Safadi tackled regional issues, including in Palestine and Syria, the fight against terrorism, and support for Iraq and Lebanon.

“Safadi underlined Washington’s central and leading role in efforts to breathe new life into the Palestinian-Israeli peace process to solve the conflict on the basis of the two-state solution and in line with the international law and approved references,” Petra said.

Al Arabiya English has reached out to the White House for comment.

Randa Slim, a senior fellow at the Washington-based Middle East Institute, said the US officials were in Amman as part of the Biden administration’s efforts to get Jordan to join the Negev Forum and concerns over the Palestinian-Israeli conflict.

Abdullah is expected to visit Washington in the coming months.

Last week, around 150 officials from Bahrain, Egypt, Israel, Morocco and the United Arab Emirates attended the American-led Negev Forum summit, which the Biden administration created as it looks to continue the progress made by the Trump administration on peace efforts between Israel and its neighbors.

And although the above countries have normalized ties with Israel, along with Jordan, Amman refuses to participate in the forum as long as the Palestinians are omitted.

But Jordan’s king also raised eyebrows in a recent interview in which he warned of severe consequences if the new far-right Israeli government continues its provocative policies in al-Aqsa, Slim said.

In last month’s interview with CNN, Abdullah said there were concerns about a “next intifada,” warning that this could lead to a complete breakdown of law and order.

In Iraq, McGurk and Hochstein met Iraqi Prime Minister Mohammed al-Sudani. Over the weekend, Sudani told the Wall Street Journal that he favored the continued presence of American troops in the country.

The US Embassy in Baghdad said officials confirmed President Biden’s commitment to the Strategic Framework Agreement “with special emphasis on coordination and programs to support the Government of Iraq’s reforms in the areas of energy, infrastructure, and climate to benefit the Iraqi people.”

“The delegations also welcomed recent progress in resolving differences between the Government of Iraq and the Kurdistan Regional Government with respect to revenue sharing and energy exports,” the embassy said.

McGurk reaffirmed the US’s commitment to helping Iraqi forces in their fight against ISIS.

The embassy’s readout added that Iraqi FM Fuad Hussein is expected to visit Washington next month for strategic framework talks.

McGurk also was reported to have met with Kurdish figures, including President of the Kurdistan Democratic Party (KDP) Masoud Barzani, and other officials from the Patriotic Union of Kurdistan (PUK).

Tensions have been on the rise between the KDP and PUK, especially after last year’s assassination of an intelligence officer with ties to both parties.

The US has been concerned about the deteriorating ties between the Kurdish sides, its negative impact on the fight against ISIS, as well as the ability of Iran to capitalize on these tensions and spread influence.

“Only the US is an acceptable mediator to both Kurdish parties and can help prevent the political tensions between them from turning violent,” Slim told Al Arabiya English.
#Joe Biden
Add Comment