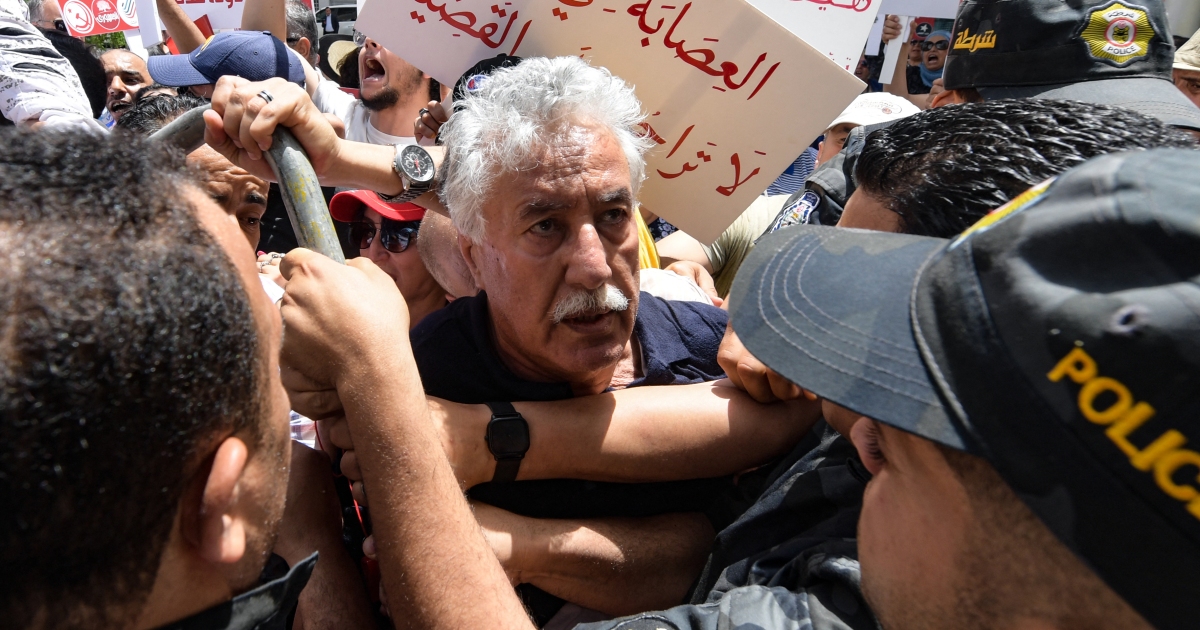 Police blocked protesters marching towards the headquarters of the electoral board whose chief President Kais Saied recently replaced.

Clashes have erupted between Tunisian police and demonstrators against President Kais Saied as about 100 people protested a referendum slated for July – a year after Saied staged what critics call a coup.

Police blocked protesters as they marched on Saturday towards the headquarters of the electoral board, whose chief Saied replaced last month in a further move to extend his control of state institutions.

At the protest in the Tunisian capital Tunis, organised by five small political parties, some demonstrators held up placards reading, “The president’s commission = fraud commission”.

On July 25 2021, Saied sacked the government and suspended parliament, which he later dissolved in moves that sparked fears for the only democracy to have emerged from the Arab Spring uprisings.

He laid out plans for a referendum to take place next month on a replacement for a 2014 constitution that had enshrined a mixed parliamentary-presidential system often plagued by deadlock and nepotism.

Saied fired 57 judges on Wednesday, accusing them of corruption and protecting “terrorists” in a purge of the judiciary. The move came just after he appointed three of the seven members of the Independent High Authority for Elections (ISIE) electoral commission, including the president.

In May, he appointed former ISIE member Farouk Bouasker to replace Nabil Baffoun, a critic of his July power grab.

‘Free voices will never be silenced’

Tunisian judges said on Saturday that they plan to suspend work in the courts for a week and hold a sit-in to protest against a purge of their ranks.

In a session attended by hundreds of judges, some of the dismissed judges said the purge came after they rejected interventions from the justice minister and in some cases from people surrounding the president.

Anas Hamaidi, president of the Association of Judges, said the strike will start on Monday in all judicial institutions and could be extended.

“This injustice will not pass in silence …. These free voices will never be silenced,” Hamaidi said. “The attack was not only against judges, but on the law and freedoms.”

Among the judges fired this week was Youssef Bouzaker, the former head of the Supreme Judicial Council whose members Saied replaced this year. The council had acted as the main guarantor of judicial independence since Tunisia’s 2011 revolution that introduced democracy.

Rahed Ghannouhci, speaker of the dissolved parliament, called in statement for “national forces, parties, civil society, to stand by the judges in resisting the brutal dictatorship to preserve an independent judiciary”. 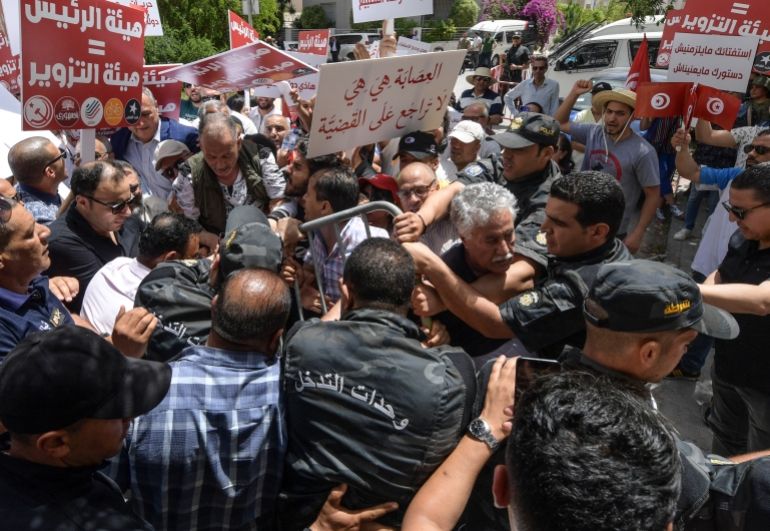 Political analyst Amine Snoussi said Tunisians will likely see the “emptiness of Saied’s project” as the current crisis plays out and there is “no one left to blame”.

“That’s the moment that Tunisians will realise that he had no project whatsoever for social and political issues,” Snoussi told Al Jazeera.

Fadil Aliriza, founder and editor-in-chief of Meshkal.org, an independent news website, noted all of Tunisia’s political parties have come together in opposition to Saied’s decisions.

“Many people have raised alarm bells about the president’s moves. They’re concerned about the referendum and parliamentary vote in December not being as free and fair as in the past,” said Aliriza.
‘The real problems’

Saied’s opponents have accused him of seeking to remake the political system after consolidating one-man rule and putting in place a compliant electoral body in advance of the July referendum and parliamentary elections in December.

Saied said his moves were needed to save Tunisia from crises and his intervention initially appeared to have widespread public support after years of economic stagnation, political paralysis and corruption.

However, nearly all Tunisia’s political parties have rejected the move to hold a referendum along with the powerful UGTT labour union.

With Tunisia’s economy failing, and with public finances in crisis, Saied faces the prospect of growing popular anger about high inflation and unemployment, and declining public services.

The UGTT said this week that public sector workers would go on strike on June 16, posing the biggest direct challenge to Saied’s political stance so far.

Al Jazeera’s Elizia Volkmann, reporting from Tunis, noted Saied has targeted critics with accusations of “terrorism” and even adultery, which is a criminal offence. She said there will likely be more protests to come.

“The thing is Saied isn’t really solving any of the real problems that Tunisians are facing, which is shortages of grain and an economic crisis that is getting worse with rising prices,” said Volkmann.

“What he seems to be doing is ramping up the populist narrative that it’s all the corrupt politicians’ fault. He’s raising that agenda again, appearing to do something by pushing for more prosecutions and longer jail sentences for what he says are corrupt people who caused all the problems.”